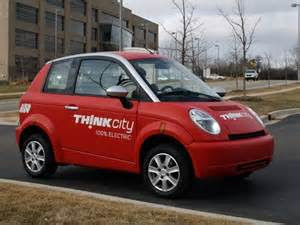 In 1994 the front cover of Time magazine heralded that "the time of the electric car had arrived." As we look at a more recent time we see another story unfold, that of  Think Auto, another government folly. Back in January of 2010, Think Auto made decided to move into a plant in Elkhart, Indiana and produce the  THINK City an all-electric, zero-emission car designed in Scandinavia for fleet applications and urban commuters.  The durable, highly maneuverable, low maintenance THINK City can travel at a top highway speed of 70 mph and has a range of 100 miles on a single charge of  its advanced Lithium-ion batteries manufactured in Indiana by Ener1, Inc. The car starts at $35,495 before a $1,000 destination charge. So was the plan.

The company planned to invest more than $43 million in building improvements and equipment in Elkhart.  The plant was slated to begin assembling vehicles in early 2011.  THINK's investments in Elkhart was to support manufacturing capacity for more than 20,000 vehicles a year.  The company had recently started delivering the latest generation of its THINK City model to customers in Europe where it has more than 1,500 cars on the road. The vehicle had a solid record and had accumulated more than 35 million road miles in customer experience since it was first safety certified in Europe in 1999.

"We've said we're out to make Indiana the electric vehicle state. It's beginning to look like the state capital will be Elkhart County," said Governor Mitch Daniels. The THINK Auto project was quickly backed by federal stimulus funding, state development grants, and tax credits. Other companies lined up to make electric cars and trucks, and their parts, too, as Elkhart County, a place long known for producing gas-guzzling recreational vehicles, set out to jump-start its flat-lining economy with electric vehicles.THINK began making plans to roll out retail distribution in select U.S. cities in the second half of 2011.

The retail distribution timeline was to coincide with the company's plans to expand the production line at its Elkhart facility, THINK soon employed more than 25 local workers, by the end of 2011 they planned to add 75 more people in Elkhart building electric cars and employ more than 415 by the end of 2013. President Obama visited the city twice promising stimulus funds to spark a new economic engine in electric vehicles. During his State of the State address in 2010, Indiana Gov. Mitch Daniels said, "Our goal is to be the capital of this potentially massive industry of tomorrow." Electric cars were supposed to kick-start Elkhart's economy.

Fast forward, two years later and those jobs never materialized, Elkhart's electric buzz has gone all but bust. Think Global of Norway, filed for bankruptcy last summer. Two other local electric start-up companies never got off the ground. Navistar is manufacturing short-range electric delivery trucks, but not yet at the level, the company had hoped. And the THINK plant delivered only about 200 electric cars, many of them to government fleets. An update from  July 2011 said a Russian investor purchased Think at auction but has not announced any plans for the ailing company. THINK North America announced it is still selling THINK City electric cars out of its Elkhart factory, but while cars are still visible through the window of the Elkhart plant there is no sign of any activity.

The last report I could find said,  from the outside, Elkhart's THINK factory looks deserted. There isn't a single car in the parking lot; the doors are all locked; the windows are dark. "The results were not anywhere what they thought they would be," says Elkhart Mayor Dick Moore. "We were looking at an investment of, I think, $4.5 million in real property, about $55 million in personal property, and 415 jobs. None of that has taken place. Even those interested in driving small and quiet electric vehicles have concerns about the battery life and range, as well as the cost. The THINK cars are rather expensive for such a tiny little thing — more than $40,000, before government tax credits and incentives." As for Indiana, the state has invested millions of state and federal dollars into creating an infrastructure for electric vehicles. Indianapolis has 100 short- and long-term public charging stations.


“It's going to continue to be an uphill battle for somebody to build a car from the ground up in a global industry where there are major automakers who have years of experience and deep supply chains to advantage them,” said Mitchell, President, and CEO of Energy Systems Network the organizer of Project Plug-IN, an initiative responsible for creating one of the most advanced ecosystems to support electric transportation in the country.  Project Plug-IN enlists a wide range of industry and government partners to solve technical and regulatory challenges related to preparing communities for electric vehicles. Mitchell said "To make this happen requires collaboration among vehicle and battery makers, utilities and government agencies at all levels and the willing participation of fleet operators, like the Department of Administration.  The response so far has been tremendous."

There has not been much good news for backers of electric vehicles lately. Last week, GM announced it will idle production of its 2010 car of the year, the Chevy Volt. And Bright Automotive announced it would shutter its operation at an Anderson, Ind. plant. The company had planned to develop a lightweight electric plug-in truck and hire up to 300 workers in Anderson. This news comes shortly after Enerdel, the Indianapolis company that makes batteries for electric vehicles, filed for bankruptcy. In the end, it can be said that all the wheel spinning and money wasted has not moved us forward. Like many of the green shoots that were springing up across America inspired by "Big Government," this has amounted to naught.

A FOOTNOTE;               This Blog reflects my view on governments over-involvement in business, hype, and misinformation rather than my view towards the electric car in our future. It is my opinion that electric cars have a role in niche markets. However, the answer for a more sustainable future lays in hybrids, smaller natural gas-powered vehicles, and  high-density communities that would result in a less auto centered culture. Reading my book "Advancing Time" or reviewing my archive of past posts will clarify my position.