Drones, killer robots, and ugly possibilities is a continuation of a subject I have written about before. Blame it on an imagination gone wild or a distrust of those with too much power. Unfortunately, more recent revelations about the American government spying on us, our friends, and the leaders of our allies across the world does little to calm my concerns. We must take note that technology is quickly blurring the line between drones and robots at the same time that the killing power of these machines is being ramped up, we should be afraid! To say these machines have the potential to become formidable and a danger in the wrong hands is an understatement.

Several reports over the last two weeks detailing cases of  U.S. armed drones killing civilians and how the U.S. has expanded their use is causing worldwide outrage. Reports from the United Nations, Human Rights Watch, and Amnesty International, and the lack of transparency on the use of drones from Washington recently resulted in a debate at the UN. A movement has emerged to get ahead of another potential problem by establishing an international ban on fully autonomous lethal weapons dubbed “killer robots,” it’s a technology that can kill targets (humans) without any human input. Whereas drones today have someone somewhere remotely determining where and when to fire, a fully autonomous air, land, or sea weapon could make the decisions on its own.

It sounds like the stuff of sci-fi, but the technology is well within reach given existing weaponry. The U.S. Navy’s X-47B, a Northrop Grumman-developed drone, has taken off and landed on an aircraft carrier entirely on its own, it would only be a short step to add missiles to its weapons bay. The unmanned plane is capable of supersonic twists and turns with a G-force that no human being could manage, and could take autonomous armed combat to a whole new level. In South Korea, several years ago a Samsung subsidiary designed a stationary robot sentry that sits along the demilitarized zone and can identify and fire at a target on its own. It’s linked up with a human operator for now. 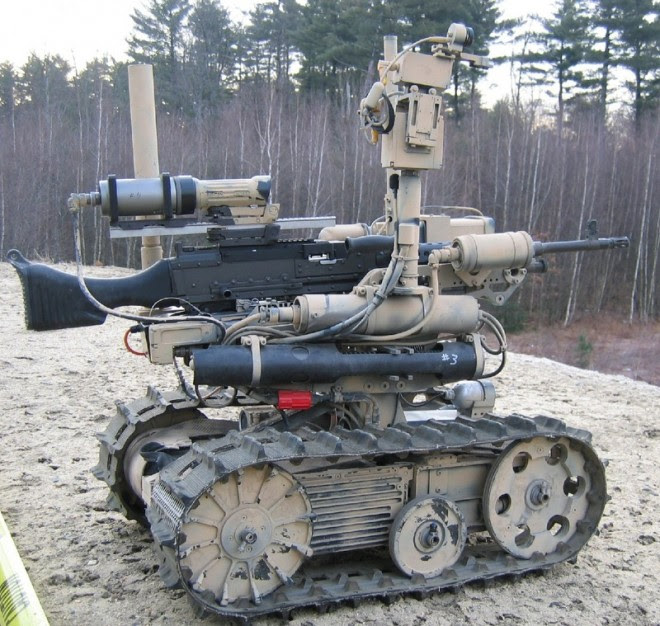 SWORDS, a previous generation of
weaponized robots had its combat
duties curtailed when it moved
without being given a command.
(Photo: QinetiQ)

Some critics say giving a non-human technology the ability to decide if a human lives or dies is simply morally reprehensible and puts these weapons on the same level as chemical and nuclear weapons. There are just too many issues and variables that make this unacceptable. What if a killer robot malfunctions and begins firing at random? What if it’s hacked? How quickly will the technology proliferate, to rival states and to non-state actors like extremist militants? And who exactly is held legally accountable when a killer robot attacks? So far some 272 computer science experts from 37 countries have signed onto support a ban on development of autonomous robot weapons technology.

Concern is growing about the potential of robots to undermine human responsibility in decisions to use force thus obscuring accountability for the consequences. In Britain a recent article in the Guardian says a "The Stop the Killer Robots" campaign will be launched in April of 2014 at the House of Commons, it will include many of the groups that successfully campaigned to have international action taken against cluster bombs and landmines. They hope to get a similar global treaty against autonomous weapons. Still, the U.S. military is slow to rule out development of technology in this area. Last year, days after Human Rights Watch released a report calling for a ban, the Department of Defense issued an ambiguous directive on autonomous weapons that restricts but does not rule out their use in the field for the time being.

This appears to be America's only government policy on the technology, and, unsurprisingly, few countries have formal policies on the issue. Of course, advocates say the weapon could, in fact, become a crucial tool for saving lives. “While a preemptive ban may seem like the safest path, it is unnecessary and dangerous,” wrote law professors Matthew Waxman and Kenneth Anderson, both members of the Hoover Institution Task Force on National Security and Law. They continued, "It is quite possible that autonomous machine decision-making may, at least in some contexts, reduce risks to civilians by making targeting decisions more precise and firing decisions more controlled."

A preemptive weapons ban is not unprecedented. In 1995, parties to the UN’s Convention on Conventional Weapons added a protocol banning blinding lasers. Leading up to that ban, the U.S. was against it but after considering the potential for mass proliferation the U.S. changed its stance and helped generate support for the measure. For now, the U.S. says it doesn’t support an international ban on this technology but U.N. representatives met over the potential threat of automated weapons earlier this week, and France, which chairs the next meeting of the CCW has pledged to put the topic of killer robots on the agenda. The U.S. will be in attendance.

The web site --- http://www.wired.com/dangerroom/2013/10/weaponized-military-robots/ ---goes even further when describing the advancements of these killer robots with automatic rifles and says they could be on the battlefield in the next 5 years. An October 18th article by Allen McDuffee says Robots armed with automatic weapons, anti-tank missiles, and even grenade launchers are marching, er, rolling ever closer to the battlefield now that they’ve shown they can actually hit what they’re supposed to.

Four robotics companies  HDT Robotics, iRobot, Northrop Grumman and QinetiQ recently ran their machine gun-armed robots through a live-fire demo at Fort Benning in what has been dubbed the "Robotic Rodeo". The point was to give the brass a chance to see just how viable such systems are. The Army, which issued a favorable assessment of the technology last week, doesn’t see our armed robotic overlords as weapons taking the place of boots on the ground, but rather as combatants working alongside troops in the field.

“They’re not just tools, but members of the squad. That’s the goal,” Lt. Col. Willie Smith, chief of Unmanned Ground Vehicles at Fort Benning said. Senior Army officers attending the rodeo appeared satisfied with the robots after seeing them accurately hit targets 500 feet away, and they hope to see battle ‘bots in action within five years. “We were hoping to see how they remotely control lethal weapons,” said Smith. “We were pleased with what we saw here. The technology is getting to be where it needs to be.” This isn’t the first time the Pentagon has played with weaponized robots, but earlier experiments proved such machines weren’t ready for primetime after some of them moved without commands.

Northrop Grumman’s CaMEL (Carry-all Mechanized Equipment Landrover) was among the armed robots on display, it can be fitted with automatic weapons, anti-tank missiles, and grenade launchers. It can run for more than 20 hours on 3.5 gallons of fuel and carry a load of 1,000 pounds. It also can produce power to charge batteries or power other systems and a hybrid engine allows the armed robot to operate very quietly on the battlefield and travel farther to provide firepower where it’s needed. “CaMEL is a multifunction platform that can quickly transform from supporting troops to protecting troops as an armed wingman, increasing the firepower of dismounted platoon and company maneuver units,” said Phil Coker of Northrop Grumman in a statement.


So what happened to Asimov's 3 Laws of Robotics? All science-fiction readers will remember these were the laws that were to be built into all machines that would keep them from ever harming a human being. It is possible that Asimov's 3 Laws of Robotics have been overridden by Forest Gump's Law of  "Stupid Is As Stupid Does!" A half crazed lunatic might even praise a killer robot for its performance and not hesitating when ordered to kill and slaughter unarmed women and children. No need to worry about PTS or all the costly issues and problems human soldiers present, with killer robots it all becomes about killing!