Passenger Rail Must Be Redesigned

The recent accident where Amtrak passengers were killed and mangled brought the subject of passenger rail travel and its future back into the headlines. To those who have given the subject much thought, it is perfectly clear mass transit in America is broken and to make things worse the system is a big money loser. Passenger railroads must be redesigned or "Reinvented". Railroads have much to be desired when it comes to efficiently moving people. While rails are viewed and hailed as an energy efficient way to move freight they could also be a great way to move people, but to do so we need to take a fresh look at what is really required and what is not. Most likely it will mean doing a lot of retrofitting the parts of the current rail system that could still be used.

During the last 250 years, train industry transformed itself from its simple beginnings into one of the most influential transport industries in the world. That period of time was marked with countless train designs of all types and sizes. By the beginning of the Civil War in 1861, there were 30,000 miles (more than 21,000 of them in the North), and lobbyists were clamoring for a transcontinental system across the nation. The number of railroad miles continued to climb until hitting its peak in 1916. That year there was more than 250,000 miles of track—enough to reach the moon from Earth. Over 1 million people worked for the railroads back then and the train was the main way to travel and move freight on land.

Railroads must be redesigned if they are going to be economical people movers. While I don't think it will happen the fact is we need to totally rethink what is needed to efficiently transport people, the wide heavy tracks and stout passenger cars we use are overkill. A much lighter and smaller style pod would work, it could even be equipped with an undercarriage that would move the wheels in or out to adapt to a narrow "public transportation" or the wider standard rail tracks now in use. Some of the things I have seen over recent years are cause for concern and proof that regulators are still too involved and poor decisions are being made as to the direction and future development of this important national resource. 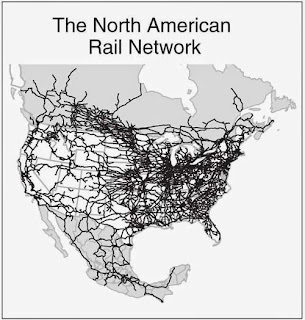 While I do not claim to be a big fan of Elon Musk, I admit when he unveiled his idea for the Hyperloop in August of 2013 it created quite a stir.  The Tesla Motors and SpaceX CEO dropped a 57-page alpha white paper on us. With his predictable flair Musk noted he didn’t really have the time to build or give us such a revolutionary transit system that would shoot pods full of people around the country in above-ground tubes at 800 mph. The reason this is important is that it was one of the few moments in America when people discussed an alternative way to move people about. For futurist and those who enjoy picking apart complicated plans, it was a godsend.

Years ago trains were limited by many factors that no longer apply today. Improvements in materials and advancements in technology have cast the door wide open to rethinking the whole people moving process. In doing so the 80/20 rule leaps out at me if we can meet 80% of our objectives and achieve the bulk of what we want for 20% of the cost why complicate things. I contend the alternative to our current passenger trains neither be so drastically different or as expensive as the Hyperloop plan. Also, in the background of this debate the KISS principle screams out to be heard, "Keep It Simple Stupid" is the voice of reason in a situation like this.

We must remember that bigger is not always better, and everything does not need to be ramped up and put into operation by tomorrow afternoon. When it comes to creating or changing something like the existing passenger rail system several big factors come to mind such as trying to utilize current rails and routes. Today even trying to run new rails and procuring new easements or corridors is cost prohibiting in areas of high population. This would mean adapting any system we develope to be able to utilize existing routes and most likely in a way that would coexist and not interfere with other forms of transport.

Before we can move forward we must overcome the existing definition or idea of what most people think a passenger train must be. New people transports need not be limited to using only one style or rail width but could adapt and mechanically adjust to narrower or different tracks in much the same ways as cars now go from two to four-wheel drive. Lighter cars would also not need the heavy duty roadbed or rails needed to hold up under hundreds of tons of weight that are placed upon current tracks. In addition to using existing tracks additional light duty and thus less costly tracks could be run where necessary. One place where right of way issues are not a big factor might be within the current confines of the Interstate Highway corridors.

The cars designed to transport people would not need to be as high as those for moving freight reducing their center of gravity nor for that matter would they need to be as wide. They could also be equipped with a system that wrapped around a lip on the track making it impossible to derail. The lighter weight people mover could sport its own motor or drive system allowing it to move without being pulled by an expensive and heavy conventional locomotive. It does not require a great deal of horsepower to get a much lighter weight car moving and once rolling little to maintain or achieve greater speeds. If each car has its own drive system it allows far more flexibility in scheduling and cars no longer have to be bunched together allowing for more departing times. Features such as GPS would tell us exactly where cars are and adjust their travel while security cameras would assure passenger safety.

A contest to create a prototype that would meet our needs or stir a conversation as to what a new modern passenger system should do might go a long way to move this debate forward. The speed and time of travel from point to point is a big factor in developing a system, but it is important to remember that at some point you are paying a lot of money to save only a small amount of time. Remember currently a great deal of time is already spent in getting to airports miles from our city centers and going through security checks for relativity short flights. When put in the proper context it seems a system to move people at a reasonable cost between city centers at an average speed of  125 miles an hour or more would eliminate the need for most smaller airports and be a superior alternative for most trips.
Posted by Bruce Wilds at 2:12 PM