Hillary Fooled Me Once, Shame On Her!

A saying exists warning us to be wary of those wishing to take advantage of our good nature and hoping to deceive us. Fool Me Once, shame on you; fool me twice, shame on me. While some people come across as purely disingenuous, at times we find that often we continue to give them another chance. Most of us are sad to say that at one time or another we have been sucked in or allowed someone to take advantage of our better nature. Like many Americans, while I disagreed with Bernie Sanders policies and views I do respect him and his passion, however, Hillary is a bird of a different feather. While talking about the two somewhat unlikable choices American has been given the misfortune of having to choose for President, a person close to me put it all in focus when she said, "The woman stole the china and silverware from the White House for gods sake!" that is when it all came rushing back to me.

As we go through life we tend to forget certain things that seem distant or not really important but after my friend mentioned it I began to recall reports flowing out of Washington following Clinton's time in the White House. After that, a quick internet search of the term "Clintons Stole From White House" brought up a slew of articles about how President Clinton and his wife started shipping White House furniture to their newly purchased home in New York more than a year ago, despite questions at the time by the White House chief usher about whether they were entitled to remove the items.  http://articles.latimes.com/2001/feb/10/news/mn-23723

ABC News reported at the time that Former President Clinton and his wife, Sen. Hillary Rodham Clinton, had returned $28,000 worth of household goods back to the White House after questions arose over whether the items were intended as personal gifts or donations to the White House. This was agreed to after they were criticized for taking $190,000 worth of china, flatware, rugs, televisions, sofas and other gifts with them when they left, in addition, the Clintons announced they would pay for $86,000 worth of gifts or nearly half the amount. Their latest decision to send back $28,000 in gifts brings to $114,000 the value of items the Clintons have either decided to pay for or return.   http://abcnews.go.com/Politics/Story?id=121856&page=1 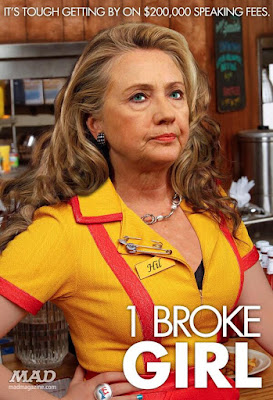 Also, there is the issue of Hillary's financial situation when her husband left office. On June 10th 2014 in an interview with ABC’s Diane Sawyer, Hillary Clinton revealed that she and former President Bill Clinton were “dead broke” when they left the White House. This was even the fact records show during one of their last years in the White House, the Clintons reportedly earned $416,039.
Apparently, that was not enough to cover their debts and their daughter’s education. “We came out of the White House not only dead broke but in debt,” Clinton told Sawyer. “We had no money when we got there and we struggled to, you know, piece together the resources for mortgages, for houses, for Chelsea’s education. You know, it was not easy.”

This conflicts with the fact the couple purchased two homes, one in Washington, D.C., and another in Chappaqua, New York. According to an NPR report, speaking engagements and books deals quickly began bringing in money. From from 2000 to 2007, the couple earned more than $109 million. A large portion of that income came from Bill’s speaking engagements. Since leaving the White House, the former president reportedly has earned $106 million from speaking fees, a 2013 CNN report noted. http://www.huffingtonpost.com/2014/06/09/clintons-broke-white-house_n_5474015.html

It seems other publications also weighed in on Hillary's claims the family left the White House “dead broke”. Of course, that wasn’t quite true. According to Mother Jones, just before she left the White House as first lady, Hillary was given an $8 million advance for her memoir Living History. One even pointed out that she also fails to mention the pension and support that Bill would receive as an ex-President. Perhaps her attitude was an excuse for taking all those White House furnishings, or shall we say, looting and plundering which caused quite the stir way back when. It might even help explain accepting gifts from the wife of a man Bill would later pardon in a highly controversial move. Another possibility was that Hilary wanted to appear like a normal middle-class American, whatever the motivation or logic behind her statements it did little to reassure voters of her honesty.


In many ways, nothing speaks louder about the honesty and morals of a public official than how they protect and treat the property and trust of those they serve. Sadly, Hillary is what our system offers up as the Democrat's candidate this year. It should be noted that voters will most likely find little comfort in Hillary, she is like "the pot calling the kettle black" when she states Donald Trump cannot be trusted and that he is a self-serving fraud. Despite all of Donald Trump's many faults, it can be said what he has done has not been while he was a public servant paid by America's taxpayers. The ugliness following the Clintons move from the White House speaks volumes as to the character of Hillary Clinton.

To many voters, it is clear that Clinton is the status quo, the establishment. Donald Trump is the change candidate and with most Americans thinking the country is on the wrong path it is likely fear mongering may not be enough to turn back the tide that threatens to wash away those in power.  Hillary Clinton has doubled down on a strategy of character assassination to convince the American public she is the lesser of two evils. Currently, the game of character assassination is in full swing with big money and mainstream media as big players. It seems all stops have been pulled out in an effort to control public opinion. The fear card, and the race card, and the woman's card have all been tossed into the mix and we see these players have a casual relationship with the truth. During all of this one thing is crystal clear and that is many Americans will enter the voting booth holding their nose in order to avoid inhaling the unpleasant smell.of a political system gone bad. Bottom-line, putting lipstick on a pig does not change the fact that it is still a pig.

Footnote;  While the media has made Trump the focus of a majority of their negative coverage due to his status, as an anti-establishment outsider, Clinton is not so loved that she escapes an occasional bashing. One of my favorites is a hilarious piece broadcast on June 27th on CNN. It was worth linking below and watching time and time again. Watch Hillary Clinton and Elizabeth Warren hugathon and clap-along. CNN's Jeanne Moos reports on this political PDA.
https://www.youtube.com/watch?v=mLXMH2h_b7Q
Posted by Bruce Wilds at 6:12 AM