Venezuela Has Descended Into Chaos 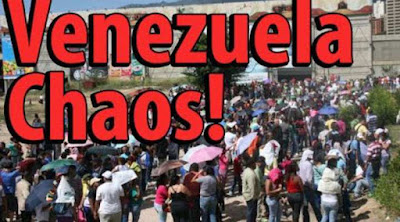 Venezuela has passed the tipping point and descended into chaos. Even though the country sits upon the world's largest proven oil reserves years of mismanagement and oil prices falling in half during the last two years have brought its economy to ruin. Its streets are constantly full of protesters and both violence and crime are out of control. The government is deeply in debt and in financial shambles, this has caused the country to spiral into extreme recession.

Venezuela is running out of just about everything, meaning you can't find food, toothpaste, soap, toilet paper or shampoo. President Nicolas Maduro has even asked women to stop using blow dryers because of a shortage of electricity and instituted rolling blackouts. Sadly, this nightmare has been going on for well over a year and worse. "There's a shortage of everything at some level," says Ricardo Cusanno, vice president of Venezuela's Chamber of Commerce. Cusanno says 85% of companies in Venezuela have halted production to some extent." Millions of Venezuelans have taken to the streets in recent months calling for an end to Maduro's presidency blaming the government for the shortages, a collapsing currency, and soaring inflation.

Over the years we have seen many polls showing the average American lacking in basic knowledge and being oblivious to events occurring around the world. A common example is that many people are unable to name their governor or senators. It is because of this lack of concern about world events and the general inability to recognize the importance of what is happening that I'm writing this post. We should always be aware that a breakdown of society can unfold anywhere and any time institutions and government become dysfunctional. In the case of Venezuela, both the political system and the economy have failed.

Here are a few general facts most people may or may not know about Venezuela. The country is located on the northern coast of South America and is the home of over 31 million people. It is bordered by Colombia on the west, Brazil on the south, Guyana on the east, and the islands of Trinidad and Tobago to the north-east. Venezuela covers about 352,144 sq miles, this makes it about 2.2 times the size of California. The country boasts an extremely high biodiversity and is home to some of South America's most incredible landscapes, including the worlds highest waterfall. As previously mentioned the country also sits on a massive sea of oil.


While being blessed in many ways Venezuela also has earned a terrible and well-deserved image problem. Hyperinflation has led to a dramatic drop in living standards and issues with the supply of basic goods as well as personal safety, particularly in the capital city of Caracas. In mid-December 2016, The U.S. Department of State warns U.S. citizens against travel to Venezuela due to violent crime, social unrest, and pervasive food and medicine shortages. Often when we talk about violence in the country we are not talking about low-level crime like purse snatching but rather events such as the killing of Sergio Vicente Goulard when paramilitaries broke into his home and shot him in the head.

Just a few examples were documented incidents and recently noted in a New York Times article that pointed out Latin America is the most violent part of the world and a place where the victims will most likely be forgotten and the murderers remain free. They include incidents such as Luiz Carlos Barbosa who's body was found on the street in the middle of a favela controlled by two criminal gangs; he had been executed for switching his allegiance. The article recounts that Jorge Luiz Bento’s family found his corpse rotting near a stream in the municipality of Nova Iguaçu, headless and with his hands bound and how Claudeir Francisco had been cycling when he was shot; he was still clinging to his cellphone headphones as his mother wept over his body. Even carjackings result in death, Leandro Alves died in the company of his wife and son after he pulled out a gun during such an attack.

Many of the economic problems the country currently faces flow directly from the politics of the leftist socialist movement led by the late Venezuelan President Hugo Chavez, who ruled from 1999 until his death in 2013. The movement he created known as the Bolivarian Revolution sought to end corruption and the equitable distribution of wealth and revenues to help the poor. Showering the poor with subsidies paid for by oil revenues resulted in creating a great deal of support for Chavez and improving the lives of many Venezuelans. however, it poisoned the economic system. this caused a great deal of capital to flee the country and the reimposition of currency controls that existed long before Chavez took power.

Because of the special challenges Chavez created for business Venezuela's economy has become very dependent on imported goods paid for with dollars they receive from oil exports. Several currency devaluations over the decades have resulted in an inflation rate that surpassed 100% in 2015 and has only grown worse causing poverty to grow. In 2013 with this crisis growing that Nicolas Maduro was elected President. He remains in power after a very close election where the opposition raised charges of fraud. Maduro has declared a state of emergency to retain power and been accused of human rights abuse. Maduro is seeking to create a new super body called a Constituent Assembly to rewrite the constitution and dismiss the current opposition-controlled legislature. This has resulted in protest where hundreds have been killed, thousands injured and thousands to have been "arbitrarily detained" or to have "disappeared".

In March of 2017, opposition leaders branded Maduro a "dictator" and on June 28 a policeman stole a police helicopter in Caracas to attack government buildings, Maduro denounced the attack as a terrorist attack against the institutions of the country. It seems that upon the death of Chavez the chickens of poor management have come home to roost. Today polarized Venezuela has become the poster child of a failed state and the damage ill-conceived policies can create. This situation shows a government cannot continue in the "business as usual" mode when it can no longer pay its bills. Shortages of food and medical supplies disrupt the day to day lives of its people causing them to join together in the streets to voice their outrage. Venezuela is proof we should not underestimate how the number of violent incidents and lawlessness tends to explode when society deteriorates into chaos, no country is immune to this.
Posted by Bruce Wilds at 4:17 AM