China has a bold agenda that was put into play roughly four years ago that will play a major role in shaping the world. It is known as the "One Belt, One Road initiative" an all-encompassing and confusing "work in progress" that, as it unfolds will reshape world trade and the relationships China has with many countries. Also known as OROB. It consists of two major parts or projects that are known collectively as One Belt, One Road, or Belt and Road, or the New Silk Road. According to Chinese state media, some $1 trillion has already been committed to OBOR, with another several trillion due to be invested over the next decade. The plan aims to pump this huge sum of money into railways, roads, ports and other projects across Asia, Africa and Europe. 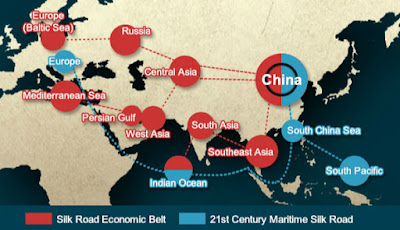 Part of the confusion surrounding OROB is the massive initiative lacks a clear name or even a settled upon abbreviation. While it might have originally had a comprehensible thesis behind it, OBOR is difficult to define. Criteria for how any given project would or could fit into the overall initiative remains elusive. At its root, the OBOR is a collection of interlinking trade deals and infrastructure projects throughout Eurasia and the Pacific, but the definition of what exactly qualifies as an OBOR project or which countries are even involved can be described as rather fluid. Yet, the concept has become so popular that Chinese officials tend to mention it regardless of what they're trying to promote.

OROB boasts some impressive numbers, it includes more than 68 countries that account for 60% of the world's population (4.4 billion people) that comprise just over a third of the world economy. Its boosters tout its massive economic promise and claim it could benefit the entire world lifting millions out of poverty. OROB is just one of several steps China has taken in recent years to increase its global clout, others include setting up a rival to the World Bank and pushing a regional trade deal in Asia. The leader of China Xi Jinping is styling himself as a defender of globalization and reaching outward at a time when American President Trump is pulling out of or threatening to kill major trade deals.

With the slowing of economic growth in recent years, China has suffered from widespread overcapacity in heavy industries such as steel, cement, and aluminum. This means cutting jobs if they cannot find new markets for their goods. Obviously, China is looking to use OBOR as a way to increase exports while shoring up the country's economy against any potential slowdown in demand from Europe or the U.S. You could say that China is leveraging their own capital to get involved in helping other countries to get wealthier so they can buy Chinese products, but painting this as a "win-win" situation may be premature. China has a history of putting its interest front and center when entering such agreements.

The countries involved are expected to contribute 80% of global GDP growth by 2050. Projects in the works include thousands of miles of highways in Pakistan, an international airport in Nepal and a rail link between China and Laos. Projects such as the port of Gwadar in Pakistan is one part of China's plans to forge new trade routes. "One Belt, One Road" even includes a train line stretching from eastern China to London. Big global companies like GE and Siemens are aiming to cash in on the plans, alongside Chinese construction firms but China may have other plans on who gets the contracts. To be clear, this does not mean China has thrown open its doors to foreign investment, while China is happy to pump money into other countries around the world, it continues to limit and is still not willing to accept similar investments in many parts of its own economy.

This does not mean this grandiose plan to strengthen China's influence beyond its borders will be successful. Some critics of the plan debunk it as a murky program that could end up being a massive waste of resources. Because at times the plan comes across as somewhat undefined it has been described as "less of a practical plan for investment than a broad political vision". In light of the widespread corruption in China OROB is increasingly being used by Chinese companies, as an excuse to evade capital controls, smuggling money out of the country by disguising it as international investments and partnerships. This has fueled its detractors claim it may turn out to be an expensive boondoggle others fear it will result in a massive expansion of Chinese imperial power.


Understandably, China intends to garner huge benefits from OBOR projects and by the nature of the project, it will be forced to accept a significant proportion of the risks involved in developing assets in central Asia, Africa and Southeast Asian countries that are prone to economic and political instability and corruption. Certainly, some of these projects funded by the Chinese government will fail and if enough fail or run into trouble at the same time the whole thing could collapse. China does not have a great track record with investments overseas. This is apparent from the history of widespread problems with Chinese projects in Venezuela, Sri Lanka and Myanmar.

Of course, China's vast container ports will play a major role in "One Belt, One Road." China loves the idea of opening new markets to its goods. The best way to create economic growth is to create good jobs and when you look at the emerging economies across the globe the most critical impediment to economic growth is lack of infrastructure. This means many of the projects being considered as part of OBOR have little economic rationale for China's involvement and in the end, OROB might be remembered as a huge white elephant with an enormous amount of wasted resources strewn along its path. The initiative's intended effects aren't likely to be seen for years. And some observers question whether the vast amount of investment will be effective. This is why some experts say Chinese money is mostly skipping the key developing nations targeted by the initiative and that China's main destinations for direct investment remain Europe, the U.S., Australia, and Canada.

In the end, for all its rhetoric about trade and development, OBOR is primarily a political project.
that has morphed into a "philosophy" or "party line," rather than anything concrete. State media has claimed OBOR will benefit: the Middle East peace process, start-ups in Dubai, currency trading, global poverty reduction, Xinjiang's medical industry, Australian hotels, nuclear power, Polish orchards, and, finally, the entire world. By forging new bonds with these countries China intends to expand its influence in the way America did after the Second World War which galvanized America as a global superpower. In fact, some people have compared OROB to the Marshall Plan which was the huge redevelopment initiative undertaken by the U.S. to rebuild Western Europe following World War II.

If OROB proves successful we could see China supplant the U.S. as the main superpower in much of the world but problems do exist. In Pakistan, more than 13,000 troops have had to be deployed to protect the China-Pakistan Economic Corridor project which runs through the South Asian country's restive tribal regions. This underscores not only the economic fragility some projects carry but also the significant security risks as well. Clearly, OROB is already impacting other issues such as strategic geopolitical relationships. After America's recent decision to cut nearly all American security aid to Pakistan, the country's defense minister announced that Islamabad will begin purchasing more weapons from China, Russia, and other Eastern European countries. Because weapons and the support system to maintain them are generally a long-term commitment this should not be taken lightly.

I want to reiterate this is not all new but clarifies and extends a trend or idea that has been going on for years. Previous Chinese overseas investments have also earned a bad reputation for not delivering on promises to local economies with the most notorious allegations of exploitation being placed upon Chinese investment in Africa. The area has seen large, state-owned companies set up shop, bring in workers from China rather than hiring locally. The main goal is often to control and then ship the mined raw materials back home. The OBOR project is so vast size that exercising effective supervision over the varying elements may prove difficult. China's economy has been slowing even with OROB already underway and after years of wildly printing money and expanding the money supply. If things go wrong, OROB could prove to be a major blight on China's reputation in much of the world.


Footnote; To view a previous article as to how this impacts Americas recent decision to cut off aid to Pakistan see the article below.
http://brucewilds.blogspot.com/2018/02/pakistan-bestows-new-concerns-upon-world.html
Posted by Bruce Wilds at 5:42 AM