The Housing Picture Is Not Brightening - Part I

The future of the housing market is a topic that has been subject to a great deal of debate and can be somewhat confusing. The intention of this post is to dispel some of the myths that have been generated and add some clarity to the discussion. One of the charts below clearly shows that new construction is still far below levels prior to 2008. It should also be noted that much of the new construction is in apartments and not single family dwellings. In much of the country, housing units are being built using cheap money flowing from the Fed and Wall Street under the idea that if it is built "they will come." While many people claim the formation of new households and pent-up demand drives this construction I beg to differ. I contend it is a combination of too much money looking for a place to hide and buyers looking for a safe place to put their money.

As I wrote this post I tried to do a bit of additional research to supplement what I know as a contractor and Apartment owner but what I found was more like a pack of lies and half-truths spun to fit an agenda. In America, the government, coupled with a slew of builder and Realtor associations control the housing narrative. Huge discrepancies exist in the cost of housing in the various markets across America and while price variations are not uncommon they should be seen as a red flag and reason for caution. Many of the messages being promoted as common knowledge do not pass serious scrutiny. Those of us in the trenches and with our boots on the ground often see things from a different perspective than the economist in their ivory towers, Washington politicians, Wall Street elite, or the media. Homeownership in America is in decline and demographics are not supportive of higher prices. If prices rise it most likely it will be a result of inflation.

Note the amount of traffic, or calls an apartment complex receives may have little to do with the strength of the market. A well qualified potential tenant only has to apply at one complex while those who are rejected continue time after time. Government subsidized housing through programs such as section 8 have cannibalized the market often taking the "best of the worse" and leaving those landlords who choose not to participate with a rather unsavory pool of potential tenants from which to choose. This often includes those denied government housing, nearly bankrupt, or chronically unemployed. The city where I live ranks 23rd in the nation for having the most "zombie foreclosures" however, markets in other parts of the nation are often not as strong as the media claims. A relative of mine who sold a home with an extra lot that was on a golf course north of Houston several years ago took a severe beating. Weak pricing in a market that was touted as very solid is more proof that what many claim is a "boom" is far from spectacular.

A Bloomberg article years ago titled "Wall Street Unlocks Profits From Distress With Rental Revolution" looked behind the curtain and pointed out that a great deal of this housing recovery that has driven the average home price up 30% since 2012 has been the result of Wall Street hedge funds buying in bulk foreclosed houses in order to turn them into rentals. Like many people, I find it totally objectionable these deals were "bundled" and offered in such a way that allowed big business to crowd the average American out of the housing market. In parts of the country, cash fleeing China and other troubled countries has flowed into the market pumping up prices. These type of situations create a questionable base for higher home prices when we consider the low end of the market is driven by Fannie, Freddie, and the FHA all insuring 3.5% down payments from borrowers that lack substantial collateral. History has shown that such special financing simply encourages people to rush out and buy homes they cannot afford. It is important to remember that low-interest rates do not necessarily bring about quality growth or prosperity, decades of slow growth in Japan has proven this. 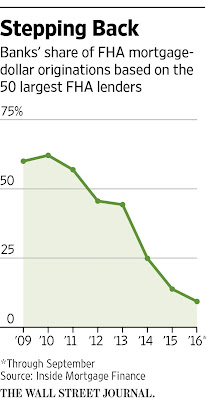 One of the sad accomplishments of current Fed policy is that low-interest rates often do not create all that much new demand but simply moves what does exist forward. To make the situation worse the FHA is busy issuing and guaranteeing risky mortgages written by thinly capitalized non-banks. In 2012 the large Wall Street banks represented over 65% of FHA backed loans, today that number has cratered. Even they have realized loaning money to people that won't pay it back is a recipe for disaster. America is preparing for a replay of the 2008 housing crisis. Our politically motivated government has insured subprime mortgages with down payments of as little as 3.5% while using weak underwriting standards. We are even seeing restrictions raised on borrowers with past foreclosures in a housing market that may drop 20% when this Fed Wall Street bubble pops. Years ago Lee Iacocca who brought Chrysler back from the brink and made the company viable said something to the effect of when you special out all your cars on Monday you have no sales for the rest of the week. In the current situation, low-interest rates are only one of the factors distorting and skewing America's housing markets, others will be discussed in part two that will be published tomorrow.