China Must Adjust To Some New Realities - But Will It?

Since Donald Trump became President, China has been asked to adjust to some new realities and they could not have come at a more inopportune time for the Asian country. After years of rapid expansion China is enduring a slowing economy and because of this China recently made its first major monetary policy easing announcement of 2019, the People’s Bank of China (PBOC), China’s central bank, will cut the amount of money banks are required to hold in reserve by one percentage point.

This move could pump 1.5 trillion yuan or the equivalent of 210 billion U.S. dollars of additional liquidity into the banking system to help arrest its deepening economic slowdown. The PBOC will reduce the required reserve ratio (RRR) by 0.5 of a percentage point on January 15 and again on January 25 in an effort to guarantee that banks have sufficient funds available to lend to private firms and small businesses. This is a move to provide liquidity to the economy at a time when China’s trade surplus and capital inflows are drying up. Now just one week after unveiling the monetary easing in the form of the RRR cut, China has announced even more stimulus in the way of a tax cut, using such a cut to spark a slowing economy is a departure from the infrastructure binges of the past.

For the markets the trade talks continue to be an area of concern and speculation, however, following each bout of optimism that causes the markets to spike higher comes the realization that a real solution is far from being reached, this however, does not mean that China has any intention of altering its current path when it comes to trade. China continues to stall and try to distract the world from their predatory business model that has become more blatant after the global financial crisis of 2008 when China unleashed a massive amount of money and credit into its financial system in an effort to not only keep its economy moving forward but to evolve it into a more consumer-driven model and away from its dependency on exports.

Currently, China is mired in the same quagmire plaguing the rest of the developed world and that is too much debt. The amount of new capital investment required to generate a given unit of GDP growth has more than doubled since 2007, according to Moody’s. This has resulted in a growing inefficiency of credit. Recent data from China shows imports fell 7.6 percent year-on-year in December while analysts had predicted a 5-percent rise. Exports dropped 4.4 percent, again falling far short of the expectations for a 3-percent gain. Since China now accounts for more of total global trade than the United States these numbers are troubling for the global economy. Adding to the growing fears is that Europe just released its worst industrial output numbers in nearly three years. 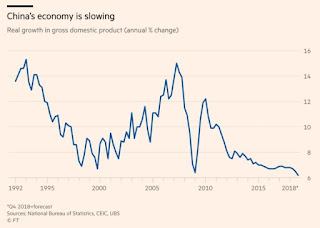 A controversial Chinese economist, professor Xiang Songzuo, has argued China's GDP growth could be much weaker than the official data which shows the Chinese economy grew at an annualized rate of 6.7% through the third quarter. Reports are that Chinese censors are not happy about a presentation delivered by an economics professor at Renmin University in Beijing which drew attention when he claimed that a secret government research group had estimated China’s growth in gross domestic product could be as low as 1.67% in 2018. Even those skeptical of the official data dismissed the presentation as unrealistic but despite being scrubbed from Chinese social media and the mainland Internet, the presentation has drawn a great deal of attention on YouTube.

The feeling is that Xiang's warnings are resonating with everyday Chinese consumers struggling with one of the worst-performing stock markets of 2018, a collapsing shadow lending sector, a crackdown on China's vast online peer-2-peer lending infrastructure, and a weakening currency. It seems falling investment cannot be offset by consumption yet there is little reason to invest when things are already overbuilt and debt has hamstrung its economy. When coupled with the overcapacity that developed as the country raced ahead on a wave of easy and cheap money China is in a situation similar to that which America faced in 1929 following a period of rapid growth and credit expansion. Time and time again history has shown that when an economy has overbuilt, over-leveraged, and overreaches a reset occurs.

The chart to the right shows how debt has soared from 150% of GDP in 2008 to around 300% at the end of 2017. Since that time the trend has continued and China has seen a dramatic rise in debt. Few countries have gone on borrowing binges of that magnitude without hitting a crisis. Adding to China's problem is a shadow banking system that is often misunderstood. Part of the issue is that much like the derivatives market shadow banking can be hard to define and how extensive it is can be blurred by this limitation. It is very possible China's debt problem is much larger than indicated because of the large role shadow banking plays in China's economy. Even local governments borrow from the shadow banking system, shadow banking is a slightly sinister name for trusts, leasing and insurance companies and other non-bank financial institutions which perform banking functions without a banking license.

No one really knows how big the shadow banking sector in China is because it is largely unregulated by the banking authority, but shadow loans are estimated to make up 20% of all loans. The shadow banking sector is so large that concerns exist about contagion and a domino series of defaults that might rack the economy as savers lose money. It is reported that 89% of households and 57% of firms have borrowed money from these groups, however, it is not just about size, it is how deep, and where the roots of this system run. Shadow bank loans can charge as much as 24-30% in interest and be for as short a period as just three to five days if someone really is in need of cash.

One shadow banker confessed that he charged interest rates of up to 100% and lent on average 6m yuan per month, which is around one million U.S. dollars. Many people see the shadow banking system as a channel to get money to solve business problems as it's efficient and quick even if the rate is much higher than the banks. These shadow banks have been selling wealth management products (WMPs), which offer returns that far outstrip the official deposit interest rate of 3%. A big problem is these unregulated products are riskier and reminiscent of some of the horrifyingly complicated products sold in the U.S. and Europe before the global financial crisis that started in 2007.

This is not just about writing off a few bad loans, it is important to remember the money fueling these loans come from Chinese savers who have taken on more risk to get a better yield on their savings, when loans go bad they are the losers when the smoke finally settles. One of China's most notorious shadow bankers is now in jail serving a life sentence but this does not help those who loaned this person money because of the high rates he paid. The "investors" become victims and often lose everything they have saved to retire on when a shadow bank goes bust. In some cases, people lend money to someone like their boss to earn more interest than the meager rate offered by the bank. During the global financial crisis the central government launched a spending program, however, rather than provide funding for this it left getting financing for projects up to local governments, the fact that some of them borrowed from the shadow banks is proof of just how extensive shadow banking is.

China’s debt mania, by this I mean madness, craziness, and frenzy is now the largest ever experienced in the postwar emerging world. As the China story unfolds it is clear the scope for a debt meltdown in China remains immense. China's banking sector is the biggest in the world, with assets of over $30 trillion and equivalent to 40% of global GDP. China’s four biggest banks are also the world’s four biggest. Its stock markets, even after the crash, are worth $6 trillion, second only to America’s, and its bond market, at $7.5 trillion, is the world’s third-biggest and growing. Keynes' theory was the government should create demand when the economy starts to contract and reverse when the economy recovered. Increase the debt to stimulate and decrease debt once the economy recovered. It appears China as in the U.S. has only followed half that theory and encouraged debt to stimulate the economy. Do not expect this to end well.
Posted by Bruce Wilds at 4:21 AM