The Magnitude Of One Billion Dollars Put In Perspective 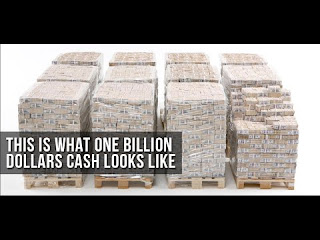 When we compare apples to oranges we are comparing two things that are very different. The same thing can be said about a million dollars and the much larger sum of one billion. While both numbers represent a sum of money the size is drastically different. So different that it is difficult to internalize. As our national debt rapidly approaches 23 trillion dollars nothing is as sobering as looking at the National Debt Clock. As I will show below every 1 billion dollars spent by our government represents an outlay of roughly $3 for every person in America. This means each 100 billion spent by our government represents or equals $300 per person or around $1,020 per family.


At one time a billion dollars was a massive amount of money and it still is. Considering how modern media and politicians throw the "B" word around most people no longer see this as the enormous sum it represents. On several occasions, I have heard a billion dollars accidentally confused with its much smaller sister the million marker. This drives me crazy and is an indication of just how difficult it is to get your head around these large sums of money. When someone misspeaks and says " the cleanup effort for super-storm Sandy may run as much as 60 million dollars."  With a billion dollars being a thousand times larger this confusion is undefendable.

Believe it or not, the little pile next to the man on the top left is $1 million dollars (100 packets of $10,000). You could stuff that into a grocery bag to walk around with it. Start talking about a $1 BILLION dollars as shown on the top right, now we're really getting somewhere...

Internalizing the magnitude of the difference is no easy task!

A million is a large number. To put it in perspective think in terms of someone working every year from the age of 20 until they are 60 making $25,000 a year. Their total income over their life would be one million dollars. The magnitude of the difference between billion and million is important. Another way this difference can be illustrated is with the example below that uses time as a scale or measuring stick:
Now back to our topic and "debt math primer."  Making the ugly math simple so we can understand how it interrelates with our debt is no easy task, but let's have a go at it. In an effort to keep this simple I have chosen to focus on America. A similar formula can be created for almost any country. To make things easy lets us do a bit of rounding off and work with easier to manage numbers. Not lying about the numbers to arrive at a clear picture of reality is important.

We will start by placing the population of the United States at 333 million people, (this number is reasonably close) and includes every man, woman, and child. What makes this important is that it includes infants, children, teenagers, the nonworking both self-sufficient and those on government assistance, the retired, and the elderly in nursing homes. How marvelously simple and convenient that this number goes into 1 Billion dollars roughly 3 times.

This means that every 1 billion dollars spent by our government represents an outlay of roughly $3 for every person in America!

Taking the number of people and placing them into other groups is more challenging. Those groups can include; households or families--- for ease we will call the average household  3.4 people. When we look at "workers" we are looking at according to government figures in 2008, 120 million people were employed out of an estimated 330 million citizens. However, unemployment increased after that date. Last but not least how many taxpayers exist in America? This is very complicated,  many taxpayers get back more in a refund than they pay in and there is a huge difference in the amount people pay, also do we consider a joint return as two payers? The fact is, nearly half of households do not pay taxes. Even worse, a great number of American households are subsidized by the government meaning the debt burden is really carried by a much smaller number of people. This we something we must remember!

Still, returning to simplicity: if we view all Americans as equal, this means, $100 billion represents or equals $300 per person and $1,020 per family.

Off to the right is another visual representation comparing different amounts of money, by clicking on it you can see in larger glory the point it is making. Unfortunately, we are not talking about only $100 billion dollars. The American government has been running massive budget deficits for years. Recently we saw several years where the deficits far exceeded one trillion dollars. One trillion dollars is ten times the $100 billion multiplied out above. That would represent a staggering $3,000 per person and $10,200 per family being spent each year, year after year, it adds up very fast! Again we must remember nearly half of American households do not pay taxes, and if they don't it means someone else must pay their share for them.

Sadly, this massive deficit is what is propelling the economy forward, and it is not sustainable. Please note; Massively compounding the problem is the realization that most people such as infants, children, the disabled or unemployed could not pay their share if their life depended on it. This transfers their burden to the remainder of society. The bottom-line is that it is far easier to spend or waste money than to pay it back and a billion dollars is a lot of money to repay. When you start talking about debt in multiples of thousands, tens of thousands, and even more the task becomes impossible.