Across America many buildings stand empty or under-leased. They once housed thriving businesses that provided Americans with good-paying jobs. Over the last several years retailers have been closing stores and as the carnage rapidly accelerates this will be back in the news bigger than ever. The impact of these store closings all across America will be huge and take a huge toll on communities with a great number of jobs being lost forever. Much of this is linked to small businesses having its clock cleaned when forced to shutdown because of Covid-19, however, a lot is related to paying higher wages, compiling with new government regulations, and being forced to compete with big businesses backed by Wall Street money.

Retail closures come with a hidden cost to society that the average person fails to internalize. Retail closings will result in lots of other small businesses closing their doors. Not only will the retail employees lose their jobs but these stores support many local businesses. People often forget that the brick and mortar stores suffer several expenses not fostered upon online companies. All these constitute a sort of tax on these stores which benefits the community in which they are located.

These costs rapidly add up and include such things as maintaining landscaping, ensuring safe ingress and egress, or providing a parking lot for customers. Staffing for longer hours, for the convenience of customers, often results in being open when foot traffic would indicate a store should be closed. Dealing with security and shoplifters is another expensive burden. Over the last few years, stores such as Target and Macy’s have even had to face a slew of dishonest shoppers trying to sneak defectives products purchased online back as exchanges and trading them for a fresh unbroken product. I have seen this costly abuse recommended by several online shoppers that see this as an "easy fix" on how to handle defective merchandise.

Large retailers as a group are collectively set to lock the doors for the last time at thousands of stores this year. In the past I have written about how we should think about what kind of community and world we wish to live in and how best to preserve the nature and quality of the life we seek. I have even gone as far as to suggest consideration be given to levying an online transaction fee to level the playing field. The revenue from such a fee would be sent to local governments in the area where the sale originated or goods are shipped. The ugly reality that store closures are a cancer will soon be clear to those that have rushed to buy from online retailers. All this flows into what we will soon witness as rents fall, mortgages go unpaid, commercial real estate values fall, and the local tax base shrinks away. Defaults on loans and bonds in conjunction with the reduced property taxes for local communities now appears in the cards.

Even before Covid-19 struck, Credit Suisse predicted 25 percent of shopping malls might have to shutter their doors by 2022 if shoppers continued to move online and mall traffic declined. Now, Bloomberg, reports that landlords have been sending out thousands of default notices to tenants. These businesses have experienced a collapse in foot traffic, sales and cash flow due to the COVID-19 pandemic are simply unable to pay their debt obligations.

Restaurants, department stores, apparel merchants and specialty chains have in some cases gone as long as three months without paying rent. With many traditional brick-and-mortar retailers having very heavy debt loads and looking at nearly $1 trillion of debt coming due over the next 3 to 5 years if the economy turns south these closings might only be the tip of the iceberg. We are about to see a slew of empty buildings blighting our landscape and driving down the value of properties across the nation. This is occurring while online retailing giant Amazon continues to acquire a more significant share of the consumption pie.

Sadly, most politicians have a poor grasp of business and are more interested in pandering for votes than trying to create more sustainable communities. Washington lawmakers have shown little interest in addressing the issue of how online shopping plays into the overall economy other than initially granting it some rather large advantages. This has been followed by state and local officials going over the top in competing for what they call new industries and jobs. This often results in special tax breaks, deals, or incentives for companies such as Amazon in exchange for investing or locating a facility in their area. In the long run, this hurts and weakens companies already located and competing in their market but that often gets brushed aside. 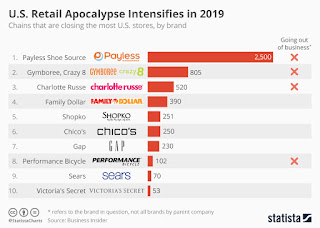 In the last few years, department stores like Kmart, Macy’s, Sears, and JCPenney, and retailers including Best Buy, Payless, BCBG, Abercrombie & Fitch, and Bebe have decided to close dozens of locations. Some have even slid into bankruptcy or vanished completely. The fall of the once massive Toys 'R' Us name in 2018, should have drawn more attention. With more than 700 U.S. stores the Toys “R” Us chain was a prime example of just how much retail has changed in just the last decade. When KKR & Co., Bain Capital, and Vornado Realty Trust took over the company in 2005, the buyers justified the $7.5 billion price, in large part based on the supposedly valuable properties that came with the deal. If current trends continue, the drop in the value of these properties has only started and in the future will have a gigantic effect on the economy.

Much of this space is located in the large shopping malls that once flourished in commercial zones of suburbia and many now sit empty and abandoned. While some of the empty storefronts will be re-purposed many will not. Sadly, America has created a bureaucratic obstacle course to rehabbing buildings by adding a great deal to the cost. This makes demolition more appealing. Between meeting new regulations and codes dealing with the Americans with Disabilities Act (ADA) and other issues building owners often choose to simply tear down the structure and rip up the parking lot which is also required as part of the demolition. This reduces the often huge tax burden while they try to recoup part of their investment by selling off the land.

US retail vacancy rates were at 10.2% in the fourth quarter of 2018, but are expected to go through the roof. America has far more retail space than it needs. The country now has roughly 24 square feet of retail space per capita, more than twice that of Australia and 5 times that of the UK. Much of it has been built in recent years using low-interest money as investors rushed to build malls and shopping centers under the premise that if they built it "they would come." The shift to buying from online retailers such as Amazon and overbuilding has broken retail's decade-old profit formula. The culling of unprofitable stores and bankruptcies has added to the number of empty storefronts and malls. Do not expect retail construction to recover anytime soon. 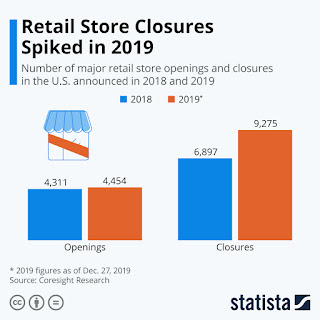 Last year more than 9,275 stores closed their doors while only 4,454 stores that opened in the same time period. While some people make the argument this is all part of "creative destruction"  where new technologies and better ways of doing things simply crowd out the old, something more sinister is going on here. Retail is in full-fledged liquidation mode as a result of being monkey hammered into submission by a wave of new reality sweeping across America. Not only have they been battered by online retailers such as Amazon but paying employees more so they can spend the money "elsewhere" simply does not work.

There are a number of trends at work behind America's retail apocalypse such as retailers taking on too much debt and our government giving online retailers special tax treatment. in the past, state and local governments have put packages together with special incentives to lure Amazon to build in their areas oblivious to the future damage this will cause. This is a company that often pays no taxes but sells billions of dollars worth of foreign-made goods and services to our government. Even the United States Postal Service has joined in this effort which destroys small local businesses by making deals to deliver goods at below their cost even on weekends. Add to this state and local governments that burden brick and mortar businesses with taxes and fees it is no wonder things are in such a sorry state.

Consumers might someday regret throwing their communities under the bus for the promise of free overnight shipping. The closing businesses, both large and small are often viewed as the bedrock of our communities and with the closing of each one, a little bit of us goes with them. Consider this post a reminder of the massive amount of real estate taxes these stores pay. This money flows directly into the support of local police and fire departments as well as maintaining roads and such is a big disservice to the companies that also employ our friends and neighbors. These stores are where we go when we need something fast or that has to fit just right. As a final argument as to why we should support local stores, remember, that we the people will be forced to pony up more dollars in local real estate taxes as their contributions drop and local services are cut.
Posted by Bruce Wilds at 7:20 PM