Ebola May Have Reached Critical Mass! 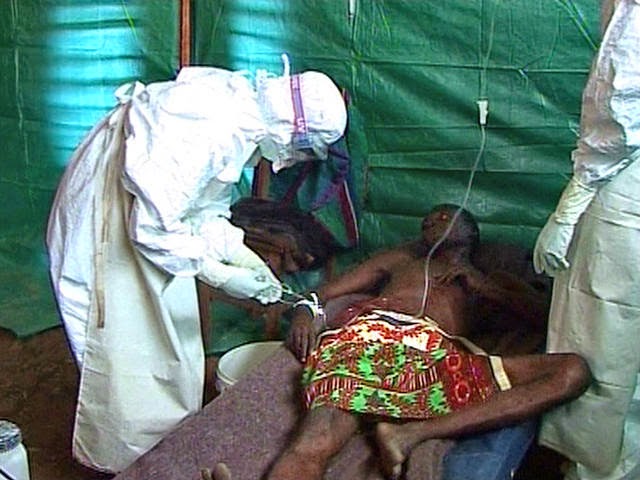 Americans ignored Ebola while thousands of people died in Africa, now that one person gets sick in America it has become an "Oh My God" moment. For weeks Americans have tried to drop this into the dustbin of also ran or nuisance stories that when kept at a distance is of little interest. Unfortunately this may soon change as the virus is picking up "critical mass."  In this instant I'm referring to the point where enough people are infected with the virus that it can sustain a chain reaction and expand out of control. The bad news is Ebola may have already reached critical mass and be impossible to contain.

As I watch the evening news I find myself fast-forwarding when the subject of Ebola comes up because it is always more of the same sad depressing stuff. We are told how more people have died and how more people have become infected. The talking heads then come on and tell us more about how it is getting worse. The Ebola outbreak in West Africa could spread to hundreds of thousands more people by the end of January, according to an estimate under development by the U.S. Centers for Disease Control and Prevention that now puts one worst-case scenario at 550,000 or more infections.

President Obama recently launched an unprecedented plan to fight the spread of the deadly Ebola virus, now afflicting countries mostly in West Africa. The president is dispatching 3,000 American troops on a comprehensive humanitarian mission to help in containing Ebola, these troops will take the lead in coordinating an international response, facilitate logistics and engineering. This will come at a price tag of up to $1.26 billion dollars, including $175 million already allocated. The U.S. troops will also help set up 17 field hospitals with 100 beds each and establish a headquarters in the nation of Liberia to coordinate relief efforts.

The military will rely on its training in bio-warfare to protect its personnel against Ebola and U.S. troops will have no direct contact with patients suffering from Ebola. Part of the mission will be to train as many as 500 health care workers per week in proper care and containment techniques while orchestrating a community messaging campaign about the disease, the White House said. The United States Public Health Service Commissioned Corps will also deploy 65 officers to Liberia –- including administrators, clinicians and support staff -- to manage and staff a previously announced Department of Defense hospital to care for any health care workers stricken by this ugly virus..

The following story brings a little reality as to what is happening on the ground in the stricken region. In a remote village in rural Guinea, a 9-year-old boy arrived at a clinic with his sick mother. Both had contracted Ebola -- she died on the way to the clinic -- but he managed to make it to the medical tent where doctors started treating him with antibiotics and fluid. "He was by himself in this treatment center being cared for by people in these 'spacesuits' and it was one of the most difficult things for me to see. Not just the disease … but the despair that was present, just from being alone."  recalled Dr. William Fischer, who worked in Guinea for three weeks.


A clinical instructor in pulmonary and critical medicine at the University of North Carolina Chapel Hill Medical Center, Fischer saw firsthand the daily struggle faced by doctors, health workers and patients as the worst Ebola outbreak ever seen ravages three countries in Africa. "You're [treating patients] through two layers of latex gloves. A lot of the things you normally do to convey empathy is impossible to do under all these things," said Fischer, describing the protective "spacesuit" designed to keep health workers from being infected.

Fischer said they managed to get the boy's pressure up by giving him fluids. He was even able to give him a pack of cookies. "I got a little bit of a smile out of him but he was in a tough spot," Fischer told ABC News. "Then we had to leave ... the amount of time we could stay in the isolation ward [was limited]. We left with this sliver of hope, or sliver of chance [for the boy]." The boy died that night."It portrayed how isolating Ebola can be," Fischer said. "He died without his family. You sit there and you tell yourself. ... The chances of us getting him through this is pretty low, but, man, it's miserable."

Below some reactions posted on the internet show how Americans are reacting;

* When they say "don't panic," its time to panic. I watched the movie Contagion again the other night. Scarier now than it was the first time I watched it. I don't think there's a magic vaccine coming to save us from Ebola.
* Why would you want to send 3,000 American military personnel who are not trained to deal with Ebola (people's sons and daughters) into a place where they could catch this deadly disease
*  This is a global concern. It's only a plane ride away from the rest of us. Like SARS and MERS. Remember the Spanish Flu pandemic in 1918-19 killed more people than died in all of WWI.
*We should use Ebola to fight ISIS by dropping the bodies of the dead on their fighters and watch it spread throughout their ranks. I will be the first to admit while flaws exist my idea is cleaver if only by half.

As I wrote at the beginning of this article I was surprised not to find a lot more breaking and developing news about Ebola, that is because the story is neither sexy or fast breaking. It just pounds away in an unsettling and disturbing way slowly building on itself. Americans can neither run or hide from this reality in our ever shrinking world. The bottom-line is we cannot wish Ebola away or ignore it and hope for the best. There could be  "profound and devastating implications" for the U.S. and the world even if there is no immediate threat of an outbreak on American soil.

If this virus continues to spread the economic cost as well as the humanitarian toll will be massive. It has the potential to end most travel and reduce human interaction everywhere. A worldwide Ebola pandemic would change everything. If Americans and people throughout the developed world think a bad strain of the flu is a reason to panic they had better get concerned. Anything we can do to halt or slow the spread of the Ebola virus is crucial and will allow us more time to develop vaccines or weapons to deal with Ebola down the road. We can only hope the virus does not morph or a mutant strain develop that spreads much easier or is even more dangerous and deadly.


Footnote; This post dovetails with many of my recent writings. Other related articles may be found in my blog archive, thanks for reading, your comments are encouraged. Below is an article written a while back making the case that the Federal government is often powerless and far less effective in a crisis than most people have been lead to believe.
http://brucewilds.blogspot.com/2014/07/government-pandering-in-disasters-great.html
Posted by Bruce Wilds at 4:37 AM