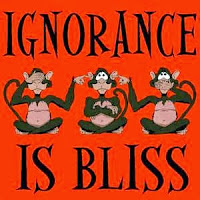 Ignorance is bliss! This is a tribute to all those cute little sayings and witticisms that lace their way through our culture and vocabulary. While I will only mention a few it should be noted that many exist and they and often the result of generations of tried and true lessons pounded into the collective heads of mankind. Now back to the title of this article, "Ignorance is bliss!"  The lyrics from a song that was popular years ago indicated that "things get a little easier once you understand." However, I find this is often not true.

Like many people, I often think about just giving up and chucking it all. Oh, how sweet it is not to know the truth and be so oblivious as to the dangers lurking around every corner that you awake each day to a world of calm serenity.  The chart to the left proves and shows without any doubt the scientific correlation between ignorance and happiness, this explains a lot about life and leaves little doubt as to the benefits of a lazy mind.


It is often hard to quantify just how intelligent the masses are but, it is safe to say many people could not qualify as a rocket scientist. I strongly suggest it is not by accident the phrase "an inconvenient truth" came about or that "da Nile" is not only a river in Egypt.  Denial is a place or state where many people live out much of their life. It is often not very reassuring to question what we are told and far easier to go with the flow or accept the general consensus that the person you are following actually knows where they are going.


Some of the drawbacks related to pursuing knowledge alluded to above may be only the tip of the iceberg in explaining why so many people choose the well-traveled path of being happy with what is, rather than thinking about what could be. I salute those who pick to live their life in a place where the color of the sky is of their choosing. The only problem with choosing the path of ignorance is the possibility that the illusion might collapse at any time if reality chooses to raise its ugly head.

In a world where Goldman Sachs is busy claiming to be doing God's work and a large swatch of mainstream media might claim to also stand upon the moral high ground, it is hard to find a good anchor. Nowhere to be seen on CNBC, Bloomberg, the WSJ, or any other status quo propaganda media outlet is much that resembles honest or thoughtful information. Their job is not to analyze or seek the truth. Their job is to keep their government patrons and Wall Street advertisers happy while keeping the masses sedated, misinformed, and pliable.

After years of economic propaganda, artificially inflated stock prices, dishonest accounting, laced with pandering and outright lies we find Washington and the media have hollowed out our culture lulling most unsuspecting Americans to sleep. The rest of the world has not fared any better. Few among us no matter how dumb or how dense think the world would not be better off if they were in charge and calling the shots as ruler supreme. One thing is very clear, the issues a person would make their priorities if they held such a station of power speaks volumes as to what they value and what they hold dear.

I must say this article has been in the works for longer than you might imagine. It takes a great deal of effort to put together such a profound piece of drivel and I hope I got the balance right. I find both solace and comfort in the idea that I'm not nearly as stupid as many of the people who occupy this world. Thank goodness the bar has been set so low because it creates a situation where it becomes much easier to compete. Sadly, this double edge sword leaves us living among people that are not too bright and unburdened by the worry of reality. I must admit it is rather ironic we who claim to see the bigger picture often envy their happiness?

As a final thought to ponder below is a link to; Always Look on the Bright Side of Life - Monty Python's Life of Brian
https://www.youtube.com/watch?v=WlBiLNN1NhQ