Both New York state and California are raising the bar and again the subject of increasing the minimum wage is back solidly in the news. Like many economists, I'm strongly against raising the minimum wage because it will make America less competitive and slow job growth. Also, the solution of mandating a higher minimum wage to address growing inequality sidesteps the core issues we face and in doing so creates more problems than it addresses. In March of 2014 an article I penned titled, "The Minimum Wage Will Go, Up Right Or Wrong!" attempted to shine a little light on why this solution viewed by many as an "easy answer" will fail to address the real pain being inflicted on society as a smaller and smaller percentage of our wealth goes to those languishing on the lower rungs of the economic ladder.

Those advocating we increase the minimum wage are often oblivious or are unaware of the unintended consequences it will usher in. We cannot circumvent economic reality, nothing is free and as wages move up we should expect prices will go in tandem  We should recognize that those on fixed incomes and savers in our current super low-interest rate environment will be directly impacted by the inflation caused by these wage increases. I concede the debate is destined to continue until it is raised and hereby state without a doubt, the minimum wage will go up! Polls show a majority of Americans support a higher minimum wage, but it is my feeling the many people that believe this will put more money into the consumers pocket and thus create economic growth fail to recognize it will also spark inflation and reduce opportunity. 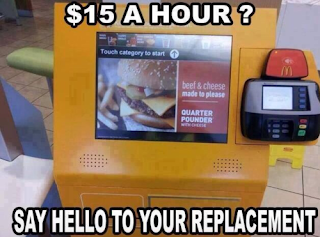 Unfortunately, much of the impact and pain of raising the minimum wage falls upon small business, the real creator of jobs and directly upon the heads of the very workers it is intended to help. Note big business will almost certainly benefit as they can afford and will replace workers with labor-saving machines and robots. Bottom-line the people at the lower end of the pay spectrum will soon find employers are simply doing away with many of the positions they hold. Many people fail to realize that raising wages will make entry-level jobs even more scarce and in many cases causes them to be eliminated or disappear.

I contend the minimum wage is more of a philological benchmark than a tool for solving issues of inequality. While the idea is considered politically popular raising it without considering the negative consequences that accompany it would be a mistake. Sadly, that is often the way Washington works. Like a tsunami, the huge crushing wall of water that washes away destroying everything in its path this force will not be stopped. This issue has been framed in a way that makes saying no difficult. Does any politician standing for re-election want to do the right thing and say "no" to "giving poor downtrodden hard working" Americans a raise? This attitude is what got us in the bind we find ourselves in today. Apparently, this trend is also still active in Europe and Britain. The reality is as long as people in other parts of the world will work for less we are shooting ourselves in the foot.

An article In the BBC a while back reported how the National Minimum Wage increase was handled and the new rates implemented to benefit a million workers. The UK Business Secretary said he had accepted the recommendation from the Low Pay Commission that the minimum wage should increase by 3%. The increase is higher than the consumer prices index (CPI) rate of inflation, at 1.9%. This means UK workers will be seeing the biggest cash increase in their take-home pay since 2008. However, what I found most interesting in the article, it went on to say the rate for workers between 18 and 20 years old wages will go up by 10p to £5.13 an hour, a 2% increase and the rate for those aged 16 and 17 will rise by 7p to £3.79, also a 2% rise.

This staggered minimum wage attempts not to stop the young from ever getting their foot in the door. Even more telling of this is that apprentices will earn an extra 5p an hour, taking their wages to at least £2.73. It appears the system in the UK at least makes an effort to keep the door open to younger and less skilled workers. The reason this should be important to America is that with so few Americans actually paid the minimum wage this will merely move the bar to block and eliminate entry and low-level jobs.

To some workers, a salary may represent what they as a person are worth, but in many ways, it reflects more on the value of our currency, what it will buy in society and whether a person should or needs to work. A major issue that many Americans and our government continue to ignore is how much the cost of living varies throughout the country. Raising wages in these high-cost areas will only exasperate the problem. It is common knowledge the cost of a house in California or along the coast is far more expensive than the same house in the Midwest, often demand in certain locations reflects a geographical preference. This should be reflected more in government social programs and they should be configured to encourage people to locate in less expensive areas rather than feed money into local economies already showing high demand. Current payouts from these programs remove the incentive for those receiving "generous" government payments to seek work in low-cost areas where it is much easier to make ends meet. In many ways, it is the government that has made it to easier to not work.

While the pictures I have used depict robots taking over America's most iconic fast food restaurant none of what I have written is directed as a slam on McDonald's. Consider this rather a glimmer of what we should soon expect throughout America and the world as robots gain new skills and become less expensive.  Through its safety net of social programs and subsidies, government has done unmeasurable long-term harm to the lower ranks of society by weakening the structures that supported our shrinking middle class. Inequality is not only an issue that separates the poor from being middle class, but much of it centers on how the elite and big business have high-jacked a majority of the economic pie. The fruit of our labor now flows to very few. Raising wages on the low end may make a few people feel better but when it comes to addressing the crux of our problem it is like putting lipstick on a pig as you take the animal to the butcher.
Posted by Bruce Wilds at 9:07 AM