"Brexit" The Choice And The Ramifications 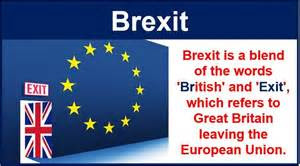 Britain faces an important decision as to whether it is time to "Brexit" from the European Union. Recently British Prime Minister, David Cameron won unanimous support from the European Union for concessions he sought from the bloc ahead of a referendum on Britain's continued membership in the group. Just a year ago the idea of Britain departing from the 28-nation alliance seemed remote. Now the odds have shifted with recent surveys showing things a bit up in the air. Britain's prime minister, David Cameron has set June 23rd as the date for a referendum. A key issue for many watching as the vote grows near is whether a Brexit would also make the UK more vulnerable to its own breakup.

Another issue concerning a Brexit is that it could cause a sharp and possibly destabilizing move in the currency markets.  BOJ officials are concerned such a move might cause money to be shifted out of both the pound and euro looking for a safe haven refuge in the yen. The yen only accounts for around 4% of official foreign exchange reserves, this constitutes a rather small float thus, any move out of these two currencies could cause the yen to strengthen which would compound Japan's economic problems by choking its export driven economy. It would also setback the BOJ's goal to generate 2% inflation and end decades of deflation. While I question the logic of wealth flowing from one troubled currency into another, concerns like these only underline how intertwined the world financial situation has become.

The fact that a difficult renegotiation of the current conditions of Britain’s membership at a summit in Brussels speaks volumes and sends a signal that Britain's continued membership is not a slam dunk. This is only one of  the several headwinds that threaten the very existence of the Euro-zone which appears totally dysfunctional and unable to address many social and economic problems that confront it. Polls show the British public is closely divided on the issue. Ironically, as we often see in the case of a bad marriage the area is bound together more out of the fear of what will happen if it dissolves rather than because the relationship is working well. In truth many Euro-zone members find those living in their home country have become disenchanted with the EU and its actions in recent years.

The forthcoming referendum has prompted government ministers to declare their backing for either the “remain” or “leave” campaigns. Mr. Cameron strongly believes in the benefits of continued EU membership, but other high-profile MPs, including Justice Secretary, Michael Gove, and London's Mayor Boris Johnson, have pledged support for the “out” campaigners.  Today largely because of Europe’s migration crisis and the interminable euro mess, the polls have narrowed. Some recent surveys even find a majority of Britons wanting to leave prompting American President Obama to weigh in on the issue. During a recent three day trip to London Obama urged Britain to remain in the union.

As a member of the EU Obama indicated Britain will help stabilize the region and allow the Britain to maximize even magnify its influence in the area as it struggles forward. After President, Barack Obama, reaffirming his preference for the country to remain part of the European Union in what many people saw as a veiled threat or outright blackmail he indicated an exclusively British trade deal with the U.S. could take as long as a decade to negotiate. “The U.K. would not be able to negotiate something with the United States faster than the EU,” Obama said in an interview with the BBC going on to state, “It could be five years from now, 10 years from now before we were able to actually get something done.”

Mr. Cameron is himself partly responsible for this issue having risen to this level. Although he has repeatedly urged his party to stop “banging on about Europe” many of his political cohorts are scared witless by the rise of Nigel Farage’s virulently anti-Euro-zone UK Independence Party (UKIP). As a result they have been relentless in hassling him to adopt a tougher line with Brussels. Years ago in an effort to appease this group he threw them the 2011 European Union Act, which requires any EU-wide treaty that passes substantive new powers to Brussels to be put to a British referendum. That sounded like a big concession, but no new treaties were then in prospect. In January 2013, Mr Cameron promised that, if the Tories were re-elected in May 2015, he would renegotiate Britain’s membership and hold an in-out referendum by the end of 2017.

As the vote grows near, BOE policy makers have said uncertainty is already weighing on the economy and that a vote to leave would prolong and deepen the impact. While many of the economic impacts of Brexit are unknown, jitters are already being felt both in the currency markets and by companies putting plans on hold while they await clarification as to Britain's direction. Where this could get even more dicey is that any change in the current "world order" might embolden a slew of  independence movements such as what we saw not long ago in Scotland. Portugal, Ireland, Greece, Italy and Spain have discovered that you cannot have full independence and share a currency. If the voters decide to break this tie will Wales and Northern Ireland move towards independence? If so, that might encourage similar movements in Catalonia, Belgium, Northern League in Italy, Basques, Cornish, and among the Poles. All this could take the Euro-zone down the road to a great deal of internal civil strife.
Posted by Bruce Wilds at 8:17 AM