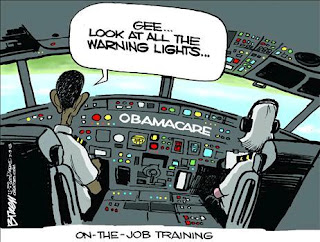 The evidence is rapidly mounting that Obamacare is moving towards failure. In a piece titled, "Unexpected cost increase could complicate future Medicaid expansion" the PBS Newshour reported the Centers for Medicare and Medicaid Services has notified Congress the cost of expanding Medicaid was $6,366 per person for 2015, this is about 49 percent higher than previously estimated. As time goes by it has become clear the Affordable Care Act has shifted consumer spending and is altering economic growth. Growth in the healthcare sector while driving the GDP higher has resulted in the illusion the American economy is faring far better than it really is. Healthcare has been growing rapidly, in 2015 spending in this sector ran about $4 trillion and accounts for almost 23% of the $17.4 trillion GDP.

This is big business at its worst, we must note, the cost of the two behemoth government programs, Medicare and Medicaid, even exceed the Pentagon's budget. Something seems very wrong with the realization that it is something that most people consider a big "negative," meaning the soaring cost of healthcare that has become such a big factor in pushing America's GDP higher. This healthcare spending has slipped into the false narrative that America is enjoying a "growing economy" spoken by people with a poor understanding of what constitutes real growth. Unlike manufacturing jobs that have long-term positive benefits such as building value that curbs imports and slows the flow of dollars away from America we find jobs in the healthcare sector often represent a transfer of wealth and growing debt that drains assets from more promising areas. The healthcare sector adds size to the economy but not the quality the numbers suggest.

Skyrocketing cost puts at risk the rational of the whole ACA healthcare program known as Obamacare, and while this issue has not been a big driver in the current presidential election it remains a deep-seated issue for most Americans. It appears the reason the campaigns are not more focused on healthcare is that it is a complex polarizing issue best left to be corrected by flowery promises rather than hard facts. Another reason may be Trump as the Republican candidate may not be strongly opposed to something resembling a single payer system. Healthcare remains one of the highest priorities for the average American family but during this bizarre political season, it seems to have been pushed aside by the antics of both candidates. The question as to the depth of Hillary's corruption and Trump's temperament dominate the media controlled airwaves. The media seems hell bent on not reporting about important issues such as the growing national debt, foreign policy, jobs, and healthcare.

Since the cost of expanding Medicaid to millions more low-income people has risen far faster than projections, this is putting President Barack Obama’s health care law under closer scrutiny. The new cost estimates could complicate any proposed extra incentive for states that have not yet expanded Medicaid and calls into question ideas such as giving them three years of full federal financing no matter when they start. The new estimates are also a warning of problems ahead for Democrat Hillary Clinton, who has promised that if elected president she would work to expand Medicaid in the remaining 19 states that have not done so. Higher costs will make it harder to sell any plan to finance the program to Congress. The ACA called for the federal government to pay the entire cost of the Medicaid expansion from 2014 through the end of this year. Under the law, people making up to about $16,390 for an individual and $33,530 for a family of four are eligible for Medicaid at little or no cost to them.

Another development causing concern is the recent collapse of an alternative to traditional insurance plans known as co-ops. Nearly half of them, which were created through the Affordable Care Act, have shut down because they have been unable to remain financially solvent. This has put roughly a half a million people in the ten co-ops out there again looking for plans, those that had been in these co-ops are now facing paying more and getting less. It should be pointed out that missing cost projections by nearly 50% is not that uncommon for government forecasters, in fact, even private forecasters have difficulty predicting the future. Government forecasters job, however, is often complicated and influenced by politics that causes them to massage numbers to fit growth scenarios that probably are already far too optimistic.

Regardless of what any politician might claim, the elephant in the room when it comes to healthcare remains, making it more affordable and in the end just who is responsible for paying the ever increasing cost. It is only because American has reached the point in the political game where people have adjusted to the horribly flawed ACA and politicians fear upsetting the apple cart by confronting the fact no easy replacement or fix exist that will please everyone that the issue is being placed on the back-burner. Ironically, with Washington picking up so much of healthcare cost and the full cost of the Medicaid expansion States have had little incentive to be cost-conscious up until this point. Many states are paying very high rates to benefit insurers, hospitals, and major local businesses, this only increases the cost and the potential for waste.

The long-term effects of Obamacare are slowly becoming apparent and by far the biggest problem is that it has driven healthcare costs through the roof. The nonpartisan experts at the CMS Office of the Actuary wrote in their report that they had been expecting per-person costs to decrease in 2015. But the opposite has happened in 2016 and is expected again in 2017. With these increases gone is the infamous promise Obama made on how the average family will save $2,500 a year on healthcare coverage. Many people think that since Obamacare  has been around for a while it is proof that the law works. The fact is Healthcare in America is still a broken system by any measure.  Americans spend more on healthcare than people in other developed countries with very poor results. The bottom-line remains that Obamacare is fatally flawed and each day moves closer to collapsing under its own weight.
Posted by Bruce Wilds at 7:57 PM