It is only logical that conflict will arise between different groups of our society concerning financial policy over entitlements. This means we should be prepared for a major clash in the near future when reality hits. Simply put the younger generation is concerned about their student loans and help raising children while many baby boomers and older Americans have already retired or are looking forward to kicking back and being taken care of. The myth that funds have been set aside to provide for the social security payments and the medical needs of older Americans will soon be laid bare and the bill for such things is about to be laid at the feet of today's youth. Call them what you want but Generation X, the Millennials and their younger "Generation Z" counterparts are in for a rude awakening when handed the bill for all that has been promised.

The siblings of “Generation Z” owe a great deal of their generational identity to Generation X. Born between 1960 and 1980 in the United States the Generation X is now between the ages of 34 and 54 years old. These are the people who laid the political, intellectual, social, creative and personal ground upon which the youth of today walk, talk and text. Sadly. they also did little to promote an environment of political reality while baby boomers were busy leveraging their clout into favorable policy that they will enjoy in later life. Our government slashed tax rates in the 1980s to revitalize the flagging economy just as boomers approached their prime earning years. The average federal tax rate for a median American household, including income and payroll taxes, dropped from more than 18% in 1981 to just over 11% in 2011.

This means nothing was set aside to pay out the generous benefits boomers have bestowed upon themselves, programs like a prescription drug benefit paired with inadequate premiums will cause deficits to explode. Today an American born in 1945 is receiving nearly $2.2m in lifetime net transfers from the "state" far more than they pay in, and far more than any previous group. A study by the International Monetary Fund in 2011 compared the tax bills of what different age citizens pay over their lifetime with the value of the benefits they are forecast to receive and found the boomers are leaving a huge bill. Those aged 65 in 2010 may receive $333 billion more in benefits than they pay in taxes. This is huge obligation the government must meet and constitutes a massive burden that younger generations are about to inherit.

For over 35 years, the Administration on Aging (AOA) has provided home and community-based services to millions of older persons through the programs funded under the OAA. These include but are not limited to transportation, adult day care, caregiver supports and health promotion programs. The Office of Nutrition and Health Promotion Programs (ONHPP) manages health, prevention, and wellness programs for older adults. This includes behavioral health information, chronic disease self-management education programs; diabetes self-management, disease prevention, and health promotion services ( “Title IIID”), falls prevention programs; HIV/AIDS education, nutrition services, and oral health promotion. All this cost money and this is only the tip of the iceberg when it comes to money being thrown at making the life of older Americans better. 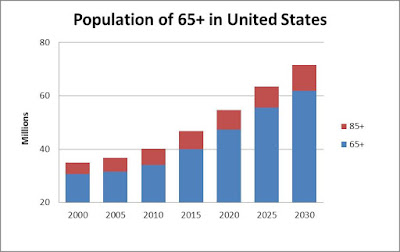 As senior citizens make up an ever-greater proportion of the U.S. population, a range of economic and social shifts will change American society. For example, total health care spending will rise significantly: In 2010 those 65 and older spent about $18,424 per person on personal health care, about three times more than the average working-age adult and about five times more than the average child. The cost of caring for elderly persons with dementia is also predicted to grow substantially in the coming decades, Alzheimer’s care alone may exceed $1 trillion annually. A report titled, 65+ in the United States paints a detailed picture of the over-65 demographic in the United States and this group is central to recent policy debates on the Affordable Care Act and even extending into the area of physician-assisted suicide.

One thing is clear, and that is as people age the cost of caring for them rises and this will create real problems for our budget. Sadly, arithmetic leaves few ways out of the mess, the numbers are ugly and much of it is only now becoming visible in our soaring National Debt. Faster growth would help, but the debt left by the boomers adds to the drag of slower labor-force growth. Carmen Reinhart and Kenneth Rogoff, two Harvard economists, estimate that public debt above 90% of GDP can reduce average growth rates by more than 1%. Meanwhile, the boomer era has seen falling levels of public investment in America. Annual spending on infrastructure as a share of GDP dropped from more than 3% in the early 1960s to roughly 1% in 2007.

Austerity is another option, but the consolidation needed would be large. Years ago the IMF estimated that fixing America’s fiscal imbalance would require a 35% cut in all transfer payments and a 35% rise in all taxes—too big a pill for our creaky political system to swallow. Fiscal imbalances rise with the share of the population over 65 growing and with partisan gridlock, this is troubling news for America, where the over-65 share of the voting-age population will rise from 17% now to 26% in 2030. As this voting block grows and strengthens it is unlikely they will loosen the noose.

This leaves the third possibility: inflation. A few years of 5% price rises could help households reduce their debts faster. Other economists, including two members of the Federal Reserve’s policy-making committee, now argue that with interest rates near zero, the Fed should tolerate a higher rate of inflation and try to speed up recovery. The generational divide makes this plan a hard sell. Younger workers are typically debtors, who benefit from inflation reducing real interest rates, older people with large savings dislike it for the same reason. A recent paper by the Federal Reserve Bank of St Louis suggests that as a country ages, its tolerance for inflation falls.

At a time when robots and automation are eliminating jobs, it could be argued that younger people are facing weakness in the labor market when it comes to wages. This means that people are having to price themselves into jobs and that there continues to be a cut in the "real value" of pay as inflation remains higher than pay increases. Youth unemployment is weak, many jobs are only part time, and workforce participation has dropped. In 2013 the Congressional Budget Office reviewed the implications of providing long-term services and support for older Americans, while the Pew Research Center looked at trends in caregiving, with an emphasis on the “sandwich generation” that is assisting both older children and aging parents. After a review of these reports, it is easy to arrive at the conclusion that the squeeze is on.
Posted by Bruce Wilds at 5:31 AM