Ten Reasons To Defriend A Friend! 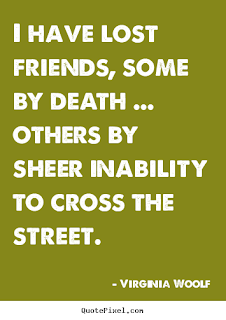 Has social media taken a toll on friends and families? In more than one case I would have to say yes. We should remember that people can be impulsive and fickle. Years ago I learned that putting something in writing often made it sound a bit harsh or more prone to being misinterpreted. It has been recommended that several topics are avoided and not introduced during dinner with family members you seldom dine with and the same type of discipline should probably extend to social media sites. While birds of a feather tend to flock together oil and water don't mix, however, in society today it is not uncommon for some people to abruptly end friendships that have existed for years with little thought.


The Ten best reasons to defriend a friend or kick an acquaintance to the curb are listed below.
1.    You simply do not like them
2.    They reveal too much information about you
3.    They reveal too much information about themselves
4.    Use contact with you as a form to push their agenda and make controversial statements
5.    They spy on you and transfer information to other sites
6.    They make you feel bad about yourself with snarky sharp-elbowed comments
7.    Having the person as a friend embarrasses you
8.    They have betrayed you
9.    They bring down or kill the mood of your other friends
10.  The person is a sociopath that will bring both law enforcement and the NSA to your door

As pointed out above many reasons exist for defriending someone and while many social media aficionados enjoy or even make a goal to collect friends bringing together feuding or opposing points of view can rapidly turn the discourse ugly. Certain formats that invite friends to comment later result in angry and hurtful comments that pit families against friends and test loyalties. This can result in a person "defriending" someone in a moment of anger that creates a rift that is later hard to bridge. While there are reasons for this action it is important to note that many people are deeply hurt when they are defriended on social media because unlike just avoiding them you are taking action to in effect cut them off from a relationship and they know it. 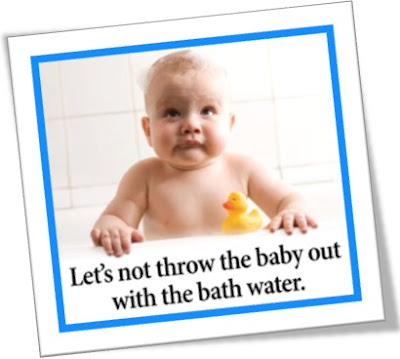 Values are interesting things and we all react differently to what we might interpret as an attack, it is not uncommon to see something very minor escalate into where the baby is thrown out with the bathwater meteorically speaking. "Throwing the baby out with the bath water" is an expression that implies that an entire idea, concept, practice or project doesn't need to be rejected if part of it is good. The baby, in this sense, represents the good part that can be preserved. The bath water, on the other hand, represents the part that needs to be discarded.

This is an old saying and some people think it might have been inspired by the relatively few baths taken by people in Europe before the 16th century. During that period baths were often thought to be unhealthy, and they were difficult to prepare because the bath water had to be drawn and heated. The difficulty of preparing bath water often meant that the same water might be used for a whole family’s bath, and the baby was frequently bathed last. At this point, the bath water might be quite dirty and might obscure the view of the baby. Clearly, a mother wouldn’t want to mistakenly discard the baby with the dirty, murky water

Over time more than one close friendship has been sacrificed and left for dead on the ground we call social media. It has been said that few people spend the last minutes of their life on their death bed pained by not spending more time devoted to work. In my particular case, I've grown less social over the years and I would say that in not necessarily a good thing. Taking to the view that most people reap what they sow and recognizing the misery people tend to needlessly heap upon each other I cannot help but think of the words spoken by Rodney King, an African-American taxi driver who became internationally known after being unjustly beaten by police,  "People, I just want to say, can we all get along? Can we get along?"

Living in a nation where politics have become very polarizing we often make little effort to see the world through the eyes of those who fail to echo our sentiments. We have allowed ourselves to be divided by petty little differences that one hundred years from now will matter naught. I want to make it clear that I'm in no way a touchy feely kind of guy, however, I do value most social customs that bind us together as a community. While pondering what I have written I'm reminded of something I read years ago about how it is best to tell those we care about how we feel while they are in our lives rather than to wait until they are gone then mourn the fact we waited too long.
Posted by Bruce Wilds at 3:17 AM