Pakistan Remains A Powder Keg In A Dangerous Region

Many Americans do not understand why the American government continues to give and pour money into Pakistan. The fact is most Americans know little about the Islamic Republic of Pakistan a sovereign country in South Asia with a population of over 180 million people. What makes Pakistan a very important player in its neighborhood is that it has nuclear weapons and is politically unstable. Trouble has been brewing in our relationship with Pakistan for years even though America has poured billions of dollars in aid into the country, it could be argued that we were buying their loyalty rather than driven by the desire to be their friend.

Years ago when the Pakistan government failed to control extremist elements in the country America began to use drones to attack within the country's border, this has stirred outrage and protest against America. It is only because of the money we have given Pakistan that we have been able to pursue such actions. Many reasons exist to be concerned about Pakistan going forward, for years the country has experienced internal violence and attacks from extremist groups within the country. With the government sometimes struggling to maintain order, and a military that sometimes threatens to take control over the country the political stability of Pakistan is often questioned. As the number of terrorist attacks have continued to rise over the years it sometimes appears the country is unfit for the many Pakistanis that want to live in peace. 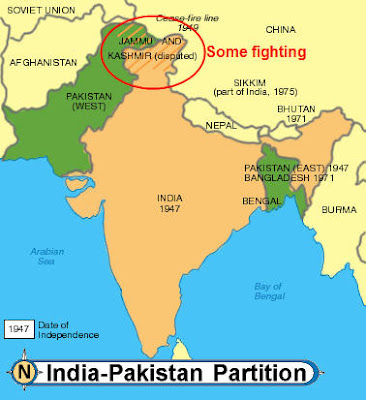 The fact that Pakistan, and India it's neighbor to the south both possess nuclear weapons and have a history of problems and tensions is a huge worry and concern for the region. Pakistan's motive for pursuing a nuclear weapons program was to counter the threat posed by its principal rival, India, which has superior conventional forces. The relationship went bad between India and Pakistan from the very moment Pakistan was created and has been affected by the seeds of discord in Kashmir. Despite being a new struggling state, the first Prime Minister of Pakistan launched an immediate war with India over Kashmir. That leader was assassinated and very soon Pakistan settled down under martial law. The military leader General Ayub Khan watched India lose the war with China in 1962 and decided to take advantage of the situation by launching another all-out war over Kashmir.

General Ayub Khan was replaced by Yahya Khan in 1969 and in just a span of two years conditions were created for the Bangladesh War of 1971. While Pakistan lost decisively and lost a huge amount of land in the form of Bangladesh little was done to resolve the bad feelings. Yahya lost office due to that debacle and gave way to Zulfikar Ali Bhutto and a whiff of democracy. If India thought that democracy would mean peace, they were sadly mistaken. Bhutto hated India and made the famous declaration: “Pakistan will fight, fight for a thousand years. If.. India builds the (Atom) bomb.... (Pakistan) will eat grass or (leaves), even go hungry, but we (Pakistan) will get one of our own (Atom bomb).... We (Pakistan) have no other Choice!...”  The bottom-line as to why Pakistan is important, it is in a position to start World War III.

One encouraging sign that things may improve is that in recent elections former Pakistani Prime Minister Nawaz Sharif has again been elected to lead the country. This is a remarkable comeback for the 67 year- old Sharif, who has twice served as the country's premier. Toppled in a military coup in 1999, he spent years in exile before returning to the country in 2007. Sharif has expressed a desire to work with all parties to solve the country's problems in a victory speech given to his supporters. "I appeal to all to come sit with me at the table so that this nation can get rid of this curse of power cuts, inflation, and unemployment," Sharif said. Despite a string of terrorist attacks, voter turnout was large, in the hope of pushing for a solution to the nation's woes in a historic election that marks the country's first democratic transition of power in its 66-year history.

There is hope on both sides of the border that Sharif will now take similarly bold steps to improve relations with India following his election victory, this would reduce the chance of a fourth major war between the nuclear-armed foes. The reason for this optimism is not only his track record of reaching out to India the last time he was prime minister but also his commitment to turning around Pakistan's mediocre economy. Closer ties with India would allow much greater trade between the two countries. Reducing the threat from India could also help Sharif accomplish another unspoken goal, reducing the clout of the Pakistani army, which has long used the potential for armed conflict to justify a huge defense budget. The army sabotaged Sharif's previous peace efforts in 1999 by secretly sending troops into India and eventually toppling him in a coup.

Prime Minister Muhammad Nawaz Sharif recently urged India to stop the bloodbath in the Occupied Jammu and Kashmir and allow the holding of a free and fair plebiscite, a type of direct vote in which the entire electorate is invited to accept or refuse a proposal bringing to an end this long-standing dispute. Speaking on Kashmir Solidarity Day the Prime Minister upped the ante, saying  Kashmir is the "core dispute" between India and Pakistan and the dream of peace and prosperity of the people of the region will remain elusive without resolving the issue." Kashmir's unfinished agenda of partition is one of the oldest disputes in the UN Security Council. Sharif said, "for the last seven decades India has denied the people of Kashmir the right to self-determination promised to them by the international community through numerous UN Security Council resolutions".

Still, the largest problem confronting the region is that while nuclear weapons can add to national security they also add layer upon layer of complexity to national defense, even efforts to deploy a missile defense system can be viewed as an offensive act. Indrani Bagchi, the Times of India's diplomatic editor wrote that India will retaliate massively even if Pakistan uses tactical nuclear weapons against it. India will protect its security interests by retaliating to a “smaller” tactical attack in exactly the same manner as it would respond to a “big” strategic attack. Yes, the reason Pakistan is important is that it has nuclear weapons and could be sucked into, or be the one to start a nuclear war. Adding to this concern is the fact Pakistan is ripe with jihadi organizations seeking a nuclear weapon or the fissile material needed to make one and both the military and the security services have been infiltrated by a number of jihad sympathizers.

The three key threats are a terrorist theft of a nuclear weapon, transfer of a nuclear weapon to another state like Iran and a takeover of nuclear weapons by a militant group during a period of instability. Pakistan is home to the harshest variants of Muslim Fundamentalism and headquarters of organizations that espouse extremist ideologies, these include Al Qaeda, the Haqqani network, and Lashkar-e-Tayiba. Nuclear bombs capable of destroying entire cities are transported in delivery vans on congested and dangerous roads. Sources say that since the American raid to kill Osama Bin Laden the Pakistanis have provoked anxiety inside the Pentagon by increasing the pace of these movements. Ironically the Pakistani government makes its nuclear weapons more vulnerable to theft by jihadis in an attempt to hide them from the United States that funds much of its military budget. Pakistan remains a powder keg but has been one for so long many people have discounted the risk.

Footnote; many of these points were written about in a similar article back on August 8, 2013. Sadly little progress had been made to stabilize Pakistan and India has recently been undergoing internal issues.
Posted by Bruce Wilds at 6:02 AM