E-Waste Disposal A Major Failure Of And By Government

For both political and economic reasons, poor recycling practices continue to haunt America and most of the world. The message that we should conserve our natural resources is vastly understated. It seems many environmentalists are asleep at the wheel and busy nibbling around the edges of the problem while massive abuses go unaddressed. While worrying about recycling things such as paper and plastic water-bottles they miss far more important areas. When we look at the amount of trash and rubbish created by developed nations an area where our failures are particularly glaring is in the recycling efforts, or better said, the lack of recycling efforts in the area of what is known as e-waste.  Both an increase in population, as well as the growth of electronic devices per-capita, has created a disposal issue that the world has yet to address.

While issues like global warming make headlines the quantity of e-waste being generated has been on the rise, the total amount of e-waste produced is expected to reach 50 million tons in 2018, nearly 50 percent more than in 2010. The discarded products collectively known as e-waste include cell phones, TVs, air conditioners, appliances, computers, and solar panels. The sad truth is most are not recycled. There are two interconnected aspects to this global problem: a lack of awareness among the general public for the need to recycle e-waste, and a scarcity of sustainable options to actually do so. 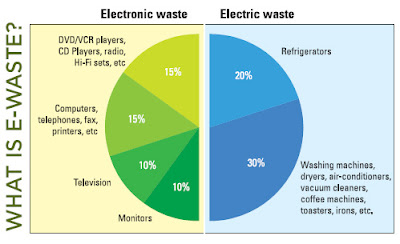 It is apparent America's EPA cares little about stopping the source of future pollution yet is willing to spend billions on the back end trying to clean it up after it occurs. E-waste products contain heavy metals and when improperly disposed of they can leak toxins into the environment and water supply or into the air, in the case of incineration. Ironically, it is often the laws that exist in countries like America that are designed to protect the environment that make it very difficult to legally breakdown and recycle e-waste items. In fact, government rules as to how e-waste is handled, disposed of, and recycled add to and greatly limit the amount that is recycled.

The bottom-line is nobody wants to get involved with recycling the hard to deal with items because the government has made it so difficult to legally recycle these products within its so-called "safe" parameters. This means that business steers clear of this market because of the massive liabilities. Because precise figures do not currently exist, we have no clear picture exactly where all these discarded items come to rest. Shipping records indicate West Africa is one of the regions harmed most by e-waste, shipping records indicate large quantities of e-waste from around the world are dumped there, often illegally. Shortsighted manufacturers, governments, and consumers have created and greatly added to the problem of properly dealing with e-waste. It is obvious much of this could be addressed by the EPA stepping in and passing a law protecting and directing recycling firms on how best to process obsolete units rather than insisting this problem be swept under a rug. Recycling these items in a good way, if it cannot be done in a perfect way, is far better than our current solution.

Granted, there are also toxic materials including lead and mercury in e-waste, that much processing and refining are necessary to extract the useful elements. But in aggregate and individually, the prize is very appealing. The report states that the gold content from e-waste in 2014 is roughly 300 tons, which represents 11% of the global gold production from mines in 2013. Still, the fact remains that many people simply don't care how they dispose of their e-waste so they slip it into the trash sending it to a landfill even though it is illegal in many states. This means it might be wise to increase efforts to collect e-waste and form massive holding areas where it can be stored until better recycling technology becomes available.


Footnote; Interestingly the link for more information on the company the EPA gave a grant to has recently turned into a dead end. I have over time written several articles on the subject of the environment and sustainability below is the link to one of the most popular. As usual, your comments are welcome and encouraged.
http://brucewilds.blogspot.com/2012/04/whats-in-footprint.html