While we have heard a great deal about how the EU wants to hit the UK with a steep bill for leaving, Britain is adamant it won’t pay. The Reste à Liquider is a fancy moniker for the EU's unfunded future liabilities or the amount yet to be settled, remains an issue of great debate. The forecast of
perhaps €60 billion seems to be the area where they are going, however, even if Britain would be insane enough to agree, the Euro-zone's problems are far from resolved. The area faces a slew of problems but in my eyes, two of the most pressing are that Italy is insolvent and Spain is coming apart with Catalan separatists defying Spanish Prime Minister Mariano Rajoy

Financially Italy is the Euro-zone's Achilles heel, not only is Italy insolvent (it’s not alone in that), but there’s a gigantic effort to hide the depth of its problems. According to the IMF, Italy’s non-performing loans levels were €356 billion at the end of June 2016 and only growing worse. This figure represents 18% of total loans for Italian banks, 20% of Italy’s GDP and one-third of total Eurozone NPLs. Intesa Sanpaolo an Italian banking group holds a nice chunk of that. The ugly reality is that Brussels and Frankfurt are being called to pump large amounts of money into Italy. In the end Draghi's pledge to do ‘Whatever it takes’ may become a very heavy burden for both Juncker and Merkel. 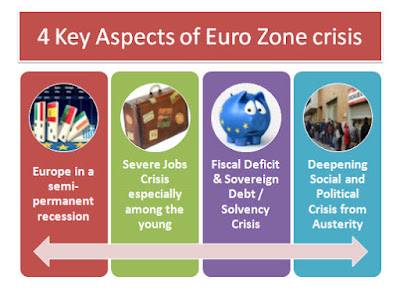 Italy the third largest economy of the Euro-zone after Germany and France, holds the largest public debt totaling over 2.3 trillion euros. It might be fair to say Italy is a debt bomb waiting to explode and the country is being held together only because of the direct intervention of the ECB which made over 102 billion euros of Italian bond purchases in 2011-2012 alone. This has continued since then and the sum has gotten much larger. Only through the LTRO have the finances of the Italian state been kept afloat. Almost everyone agrees that Italy’s public debt is unsustainable and needs an orderly restructuring to avert a default, but as usual in the Euro-zone no action is happening. In many ways for Euro-skeptics Italy remains the Achilles heel of Europe, these skeptics are quick to point out that, once foreign investors withdraw, Italy will crumble under the weight of its debt.

The problem of regions voting for independence pale next to the crushing debt several countries in the zone face, however, it should be pointed out that while most eyes are on Spain when it comes to political discontent it is also growing in other areas. The leaders of Italy's two wealthiest northern regions recently claimed victory in non-binding referendums, seeking greater autonomy from the central government in Rome. Voters in both the Lombardy region which includes the city of Milan and in Veneto overwhelmingly backed more regional control over tax revenues, immigration and education systems recently. More than 95 percent voted "yes" in both regions, according to the projections. This is not a small event in that Lombardy and Veneto accounts for 30 percent of Italy's GDP and around a quarter of Italy's population.

Many of these taxpayers in the north have come to resent subsiding the relatively poor southern regions of Italy. Veneto's capital is Venice, said there it is thought the result will give a popular mandate and empower the far-right party Northern League in advance of elections next year. This group argues that taxes the north sends to Rome are wasted by inefficient national bureaucracy. Even though secessionist sentiment in the two wealthy regions is restricted to what has been dubbed "fringe groups" with little following, the vote in favor of greater autonomy reflects pressures similar to those that resulted in Scotland's narrowly-defeated independence vote, Britain's decision to leave the EU and the current Catalan crisis. This opens Pandora's box and paves the way for even more areas to ponder if they should go off on their own.


Footnote; For a more recent update on the situation on Italy see the article below.
http://brucewilds.blogspot.com/2018/05/italy-update-how-italy-got-into-its.html
Posted by Bruce Wilds at 5:45 AM