France And The Euro-zone Continue To Unravel

It appears France and the Euro-zone are continuing to unravel as violent protesters have taken to the streets and many have engaged with the police directed to beat them into submission. The Yellow Vest protests which have gripped France for a fourth week have brought the country to a halt. This has even forced French President Emmanuel Macron to cancel his two-day trip to Serbia following the widely reported death of an 80-year-old woman trying to close a window in her apartment in the Southern France city of Marseille.  The elderly woman was fatally struck with a tear gas canister fired by police Saturday as demonstrations over fuel tax hikes raged outside her home, the BBC News reported she was taken to the hospital where she later died.

As an estimated 136,000 protesters marched in France yesterday. the BBC reported the Finance Minister Bruno Le Maire described the events taking place as an "economic catastrophe"  and called the situation "a crisis" for both democracy and society. With Paris security forces now deploying armored vehicles in anticipation of more extreme violence, it is difficult to say how long this will last. Adding to the mix and setting the internet abuzz was talk that the Macron administration had even deployed armored vehicles bearing the EU flag, this stoked concerns over whether it was the first sign of a much talked about EU Army. In early November, Macron told France's Europe 1 Radio that Europeans cannot be protected without a "true, European army."

A staggering 1,939 people were arrested on Saturday across France, including a few most likely very interested in getting the incident filmed and recorded to give them street creed as political reformers in coming years. Arrest in Paris alone stood at 1,082 at last count with 264 people injured as the anti-government protests turned ugly and widespread looting and violence marked the day. The 10,000 or so Yellow Vests who took to the streets of Paris on Saturday smashed windows, burned cars and looted shops. Most of the arrested were charged with acts of violence against a person in the custody of the public authority, "possession of explosive products," or "carrying weapons," 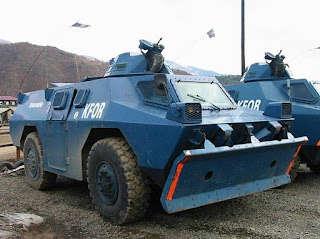 The photo on the left is an example of the type of formidable armored vehicles the Paris security forces are now deploying. The Berliet VXB-170, also known as a "VBRG" is being strategically deployed in parts of Paris most likely to suffer violence or vandalism. It was designed in the 1960s, the 12 ton, 19-foot-long vehicles with 7mm thick armor and are capable of firing tear gas grenades and can also be equipped with a 7.62mm machine gun, and either a 37mm or 40mm grenade launcher.

All this, of course, flows into concerns that the protests could lead to a big drop in tourism. Paris a top travel destination was visited by more than 40 million visitors in 2017, a new record, according to the Paris Tourism Office. One thing that is very clear and that is the damage to the economy has been severe and continues. Before the most recent protest, Mr. Le Maire said, that the restaurant trade had declined by between 20% and 50% and on Friday, the French retail federation told Reuters news agency that retailers had lost about 1bn euros ($1.1bn; £900m) since the protests first began on November 17th. In addition and the authorities in Paris say that riots have caused millions of pounds of damage.

These protest started when Macron raised diesel taxes to pay for the global warming reduction effort that he campaigned for. Today France has gained the unglamorous title of being the "Most Taxed Nation In The World."  Far-right leader Marine Le Pen has warned that Macron could become the first president to give the order to open fire on his own people in 50 years. She said he should scrap increases in fuel duty, lower gas and electricity prices and end a freeze on the minimum wage and minimum pension. It is difficult to predict what will happen next, these protest could simply run their course and melt away or if a spark is injected into the mix morph into a nationwide violent melee which ultimately forces French President Emmanuel Macron to resign.

It is difficult to appraise just how much the mainstream media is covering this and how they are spinning events but similar to the problems in France unrest is growing in several countries such as Italy and Spain both suffering from weak economies and reeling from the inflow of migrants. Add to this Anglea Merkel's declining power in Germany and now we are hearing reports that even the Dutch are concerned about the Islamization in the Netherlands where there has been several attempted jihadist terrorist attacks in recent months. From the start, the Euro-zone was destined to be tolerated and accepted by its citizens if they could feel and see tangible benefits in their daily lives in exchange for surrendering parts of their own decision-making powers, and the sovereignty of their nations to the new power forming in Brussels.


The Union is currently made up of 28 countries with Britain on a path to exit and it is important to realize many are hellbent on holding Britain's feet to the fire as a way to discourage other countries from moving in the same direction. Currently, Britain has looming before it a vote on a "dreadful exit package" which some people see as trapping the UK within the EU customs union indefinitely while giving them no say over the rules by which it must abide, this is a package they may reject which would put more pressure on all parties. Bringing all these different cultures and almost as many languages together and unify an area with such diversity has always been considered a challenge, it will be interesting to see whether it can endure the coming storms.
Posted by Bruce Wilds at 3:36 AM