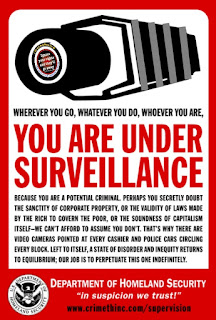 It is not uncommon for a government to keep an eye on its citizens, however, the growth of this sector of our government has been off the chart since 9-11. In response to the attack, Congress passed the USA PATRIOT Act which was signed into law by President George W. Bush on October 26, 2001. With its ten-letter abbreviation expanded, the Act's full title is "Uniting and Strengthening America by Providing Appropriate Tools Required to Intercept and Obstruct Terrorism Act of 2001." The attack gave America an excuse to reorganize its security agencies into a massive inclusive money eating monster. With both money and technology, this has allowed the government to collect and store far more data on each of us than it will ever need.

The Act with many provisions originally set to expire was renewed in 2006 and many provisions are now permanent under the renewed Act.
We have been told that all the above provisions have been enacted to protect us and pose no danger to the average citizen. The reason more people are not petrified by the government intruding so deeply into their lives is that they have been seduced by the idea it will help create a safer and better world and have accepted the illusion it will come at little cost to their freedom. This ignores the fact that man tends to be intolerant and often loves bending others to his will, this is why past efforts to create a utopian society have failed time and time again as we run into the reality that  independent thought breeds a number of ideas as to what will bring us happiness and how we might choose to live.

Totalitarian is defined as, relating to a system of government that is centralized and dictatorial and requires complete subservience to the state, sadly, it appears that is where we are headed. Man has been proven flawed and his intolerant nature has created a conundrum that has haunted mankind for thousands of years. The answer has been to create stupid laws oblivious to the reality that stupid laws spawn and create stupid decisions. clearly, all of us can't be chiefs, some of us are destined to only be Indians, that being said, living in the herd without great responsibilities upon your shoulders has its allure until you find that like the sheep lead to slaughter you are being sacrificed for the delight of others.

America was founded on the idea of freedom as our forefathers at great cost threw off the yoke of tyranny and freed themselves from English rule and being under the thumb of a distant monarch. This was done to establish a place where they could enjoy the benefits sovereignty bestows upon us. Today the foundation of these freedoms is slowly being chipped away, for example, free speech, the fact is, it is not free speech if you can only have the opinion but not say it. Not only is our every move being watched but censorship is on the rise as media claims the need to police the web and eliminate the "voices" it deems unsuitable.

A key issue is whether we have lost control of the giant part of our government that spies on us and spins out narratives that further it's agenda, another concern, is the monetary cost of this massive apparatus that added little to our quality of life. The thought of drones hovering in the sky above monitoring our every move should strike fear into the hearts of all who value their freedom and privacy. It is easy to imagine even drones zipping back and forth delivering goods being equipped with cameras storing away information on all that is occurring below but the issues go far beyond the obvious.

Confirmation of the expansion of surveillance creeping ever stronger is clear when we find out about taxpayer-funded government programs geared at watching our actions, the number of these has exploded. The TSA is running a wasteful ineffective surveillance program called "Quiet Skies" that involves monitoring people in airports who have not committed a crime or who are not on any watch list, but who are acting suspiciously. Even having yielded no evil doers the costly program that invades our privacy has continued. Now we find that those signs along the road that show you how fast you are driving may not only be there to remind you what the speed limit is but a part of a dystopian “Big Brother” spy network because even if you drive slowly and stop at every red light license plate readers and surveillance cameras are busy tracking your every move.

Today almost Orwellian technology enables the government to store and analyze data of every person in the United States beyond anything that we could have imagined. When coupled with the move towards a cashless society this gives those in control tremendous power over individuals. In the future, this sets the stage that if a massive number of people hit the streets in angry protest it is very likely that they will be beaten into submission for the greater good, possibly by robots that have little empathy but have been given the task to restore civil order. taking this one step farther, it also means those receiving assistance, guaranteed income or on the government dole may find they are at the mercy of a system where at any time benefits are canceled or cut.

In part-one of this series I wrote about China marrying Big Brother to Big Data and how going forward, every citizen will be watched and their behavior scored in the most ambitious and sophisticated system of social control in history. The system is currently far from being universally in place, however, the country's communist government has plans to rank all 1.4 billion citizens by 2020. Those who do not comply with the mores of the state risk becoming or declared persona non grata or disappearing into a re-education camp. An example of the power this yields is garnered from a report in The Telegraph that Chinese cities are launching a scoring system for dog owners where anyone found failing to care for their pets could be forced to pay a fine or even have their dog confiscated. This is already being enforced in the Chinese city of Jinan where people are permitted only one dog that must be registered with the police.

Over the last several years those watching us have gained the ability to monitor our conversations, read our Facebook posts, text messages, knows what you write, and know where we go. Fingerprint readers, eye scans, and voice recognition are no longer just the security methods of high-tech spy movies. Millions of mobile phone, bank, and investment customers now have these technologies at their fingertips. Schwab uses voice recognition, Apple uses fingerprints, Wells Fargo scans eyes, and biometric technology is rapidly growing as other companies are developing heartbeat or grip technology to verify user identity. What is lacking are laws protecting biometric information, thus far, the courts have done little to preserve our rights in the face of technologies and government programs that have little respect for privacy or freedom.

On a daily basis, we are relinquishing the most intimate details of who we are, our biological makeup, our genetic blueprints, and our biometrics (facial characteristics and structure, fingerprints, iris scans, etc.) to navigate an increasingly technologically-enabled world. Because of the government’s ongoing efforts to build massive databases Big Brother and his corporate partners in crime are becoming more invasive and intrusive. It is as if every dystopian sci-fi film and horror film ever made are suddenly converging into this present moment in a dangerous union between government, science and technology giving those in control the frightening ability to be all-seeing, all-knowing and all-powerful.

To those valuing the idea of freedom we live in frighting times, it seems that much of the world is moving towards becoming a totalitarian society in which the state apparatus is all-powerful. With each passing day. Big Brother with his corporate partners in crime keep getting more invasive, intrusive and controlling. When we look at all the ways "they" keep track of us it is easy to see freedom lovers are losing the war, every day 24/7 the government and its agents track, hunt, and adds to the data they have stored away. They know when we are sleeping, they know when we're awake, they know we are bad or good, so be careful for goodness sake because when push comes to shove it is checkmate and we have nowhere to hide.

To make matters worse every time we turn around we find the other chickens inviting the fox into the proverbial hen house rather than locking the door and standing united against the onslaught. The thought of drones hovering in the sky above monitoring our every move should strike fear into the hearts of all who value their freedom and privacy. It is easy to imagine even drones zipping back and forth delivering goods being equipped with cameras storing away information on all that is occurring below. The question we really face is whether we have lost control of the part of our government that spies on us and spins the narrative. Much of the problem we face centers around the growth in technology that enables the government to store and analyze the data of every phone and internet user, this has grown beyond anything that even Orwell could have imagined.


This blog is not written for money
or profit but as a way to share ideas
and thoughts. If you liked this post
feel free  to E-mail it to a friend
using  this link. E-mail to a friend

Footnote; This is part-two of a five-part series that delves into how we are slipping into a "One World Orwellian Society" that removes our freedoms and relegates the average person into being nothing more than the pawn of the elites. The links to both part-one and three can be found below.
https://Liberals And Conservatives Both Buy Into Orwellian Trend (Part-1).html

https://Propaganda Convinces Us It Is All For The Greater Good (part 3).html
Posted by Bruce Wilds at 4:31 AM