Modern Slavery And The Ugly Tale Of Human Trafficking 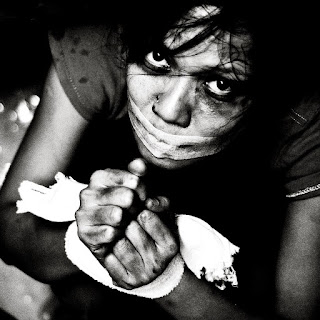 Modern slavery is an ugly topic that includes not only forced labor but enters into such things as sex trafficking. Unfortunately, slavery continues in many forms and even flourishes in many parts of the world. When a person is owned by another and considered by law as property or chattel they are deprived of the rights ordinarily free people have come to expect. This highly profitable enterprise still exist and most likely will expand as inequality grows because in many ways, whether society wants to admit it or not, the ultra-rich are often above the law.

The term, "human trafficking" is the modern polite replacement for the word slavery. It involves the trade of humans for forced labor, sexual slavery, or commercial sexual exploitation. This market is the trade of selling people, especially women and children but does not necessarily involve the movement of the person from one place to another. Human trafficking can occur within a country or across borders. It may encompass many things such as providing a spouse in the context of forced marriage or even the extraction of organs or tissues.  Human trafficking is a crime against humanity in that it violates the victim's rights of movement and centers on exploitation.

This all ties into the Jeffrey Epstein child molestation case which made big headlines and could link many rich and powerful politicians and Washington insiders to this unsavory activity. The fact that years ago Epstein was busted and possibly used his connections to stay out of jail certainly adds to the drama. Although many people can get photographed with celebrities who claim to be “friends” with them in this case, Epstein was, at the very least, a known associate and maybe even actual friend of Bill Clinton and Donald Trump as well as others in their circle. When someone who has abused large numbers of underage girls at his home is connected with US Presidents this raises eyebrows and shocks the public.

The trade of men, women, and children is occurring all over the globe and governments failing to enforce laws and victims unwilling or afraid to come forward adds to their plight. The subject is often blurred because at times these victims seem to have the freedom to move about within certain limits. Still, the sub-conscience effort to deny the existence of slavery allows the trade of human beings to continue. This activity had lurked in the shadows but is now being reinforced by new high-tech forms of tracking the whereabouts of people. The use of GPS chips and small identification tags which can be placed inside the body and hidden from sight increase the control the powerful and corrupt have over the oppressed.

Sadly, the public should not be shocked as there is a crisis of child abuse and rape throughout the halls of power in nations across the Western World. In Britain, Operation Hydrant a police investigation into cases of non-recent child sex abuse has over 2,200 open investigations unites together by the fact that the suspects, like Mr. Epstein, are all people of “public prominence.” This large scale operation formed to search for perverts and rapists in the UK elite appears not to be a unique phenomenon. The Inquiry into Child Sexual Abuse (IICSA) has been able to shed a lot of light onto numerous suspected pedophiles within Parliament and evaluate how the nation’s political parties have dealt with or refused to deal with accusations of this crime being thrown at their members. This investigation is one of many into different areas of British society including religious organizations as well as governmental bodies and delves into recent cases involving those currently active.

Slavery and human trafficking is a problem that plagues the world. In Brazil JBS, the world’s biggest meat producer, and other enterprises that can be found on Brazil’s ‘dirty list’ for slave labor donate money to top politicians.  Statista.com states that over 41 percent of all recipients receiving such money are part of the influential ruralist caucus, a congressional faction keen on revoking land rights of indigenous communities and limiting efforts to combat slavery. The leftist Workers’ Party of former presidents Dilma Roussef and Lula da Silva, who is currently facing imprisonment due to corruption, has received a stunning 20 percent of donations from companies on the dirty list. While such donations are not illegal in Brazil when the money received is from such dubious origin we have to question who the politicians are working for.

Few Americans feel women are treated well in Middle Eastern cultures where men are often held in higher esteem. Still, it is important to realize the degree and severity of oppression varies greatly in different situations. While some Americans are appalled at the treatment of women in the Middle East we should not forget varieties of this ugliness is on full display in many poor countries. In Asia, tens of thousands of North Korean women and girls are being actively trafficked into the Chinese sex trade by criminal organizations. Once there they and are often forced to endure "systematic rape, sex trafficking, sexual slavery, sexual abuse, prostitution, cybersex trafficking, forced marriage, and forced pregnancy." According to a report from The Korea Future Initiative, the victims commonly between 12-29 years old are often sold more than once and forced into at least one form of sexual slavery within a year of leaving their homeland. 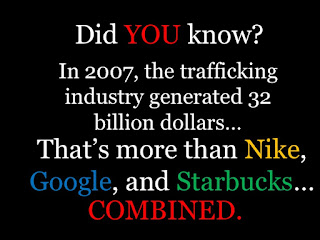 With China so large in the news today it very important to key in on the abuses happening there. According to the report, sex trafficking and exploitation is a $105,000,000 per year business for the Chinese underworld. Once in China the victims are prostituted for as little as $4 United States Dollars, sold as wives for just $146 United States Dollars, and trafficked into cybersex dens for exploitation by a global online audience. A shortage of marriageable Chinese women has created a market for foreign brides and sex workers. This demand is being filled in China's southern provinces by trafficking in victims from Vietnam, Laos, and Cambodia as well. Girls and women driven by desperation and fear unwittingly are sucked into this nightmare.

Returning to the situation here in America, it could be that we dramatically understate the magnitude of human trafficking taking place within our borders. The covert nature of these operations and our lack of awareness means statistics under-represent the scale of this problem. Adding to this is the opioid crisis because people suffering from drug addiction are particularly susceptible to being trafficked. The top five cities in America for human trafficking reports are Washington DC, Atlanta, Orlando, Miami, and Las Vegas. This is often driven by the prostitution industry.  While some prostitutes may work entirely on their own a significant number of them are working against their will. It should be noted that each of these locations are major tourist destinations with international airports. On a per-capita basis, Washington DC and Nevada have the most reports of human trafficking in the nation with rates as much as five times greater than in other areas.

The second major category of human trafficking is coerced labor. In heavy agricultural states trafficking reports are also very high. In America, a great deal about the history of slavery is centered upon the oppression of blacks but most people forget or never knew many of the Irish that came to America arrived as indentured servants. A case could be made that slavery is color blind and simply hones in on the most vulnerable of society with something the rich and powerful desire. When all the above is considered, it is not surprising that slavery often resides at the intersection of power and taboo. Cultural taboos whether social or religious prohibiting or forbidding a particular practice often have a strange allure. With this in mind, it seems those in power seem to get a real kick out of suppressing and dominating others. Allowing and accepting this diminishes all of us.

This blog is not written for money
or profit but as a way to share ideas
and thoughts. If you liked this post
feel free  to E-mail it to a friend
using  this link. E-mail to a friend


Footnote; A topic not addressed in this article is that of "state imposed forced labor." The link below delves into how China treats its millions of citizens that do not make an effort to march in step. The ruling Communist Party has built "re-education camps" in an attempt to bring these people into the “modern, civilized” world promote what the government calls “ethnic unity” but in simpler terms the apparent goal is to force detainees to embrace the Chinese communist party.
https://brucewilds.blogspot.com/2018/12/chinas-human-rights-abuse-ignored.html
Posted by Bruce Wilds at 10:37 AM