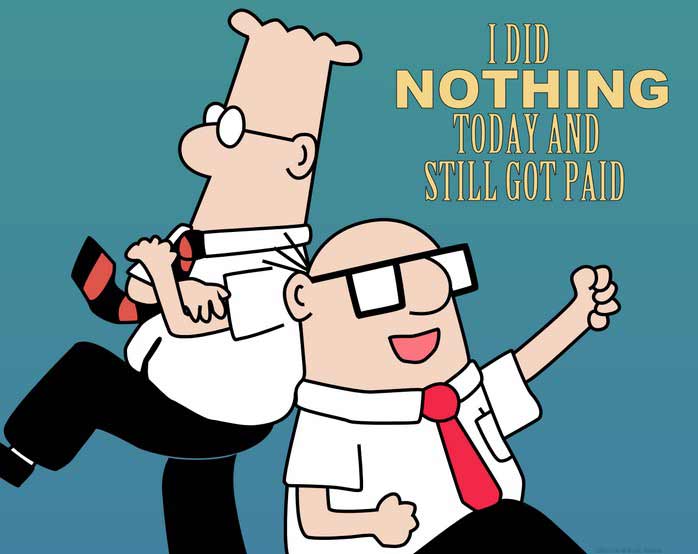 When observing a worker that is incompetent, slow, or just plain lazy it becomes obvious that productivity matters. While some workers move along with purpose others appear as motionless bumps on a log. This is why an employer will quickly tell you who is a "good worker" and who is not. The sad reality that many workers would like to deny is that they are more trouble than they are worth or that other employees are several times more productive than they are.

It seems Americans sitting at home during the pandemic and getting checks while not working has allowed the myth to grow that you can indeed get something for nothing. This may be why we are seeing many people embrace the idea of socialism and many of the theories associated with such systems. A lack of understanding on the part of workers concerning their role in the workplace seems to be on the rise.

Some workers feel that just by showing up they deserve to be paid and it is the obligation of the employer to make them happy. Sadly, this is not true, the economy suffers when workers are not productive. The fact John consistently and without error, performs three times the work Joe is able to output logically means he is worth far more to his employer and deserves and can demand a much higher wage.

This post is the result of watching an older city park employee go about his job on Saturday morning. It was almost like watching a sad comedy. This was not a case of him simply being over the hill it appeared he had never mastered the skill of being productive. Another thing society often ignores is whether a person is actually doing a task that needs to be done. A huge amount of labor is wasted on tasks that do not need to be done.

Some activities are a waste of time or even harmful to the overall health of the economy and environment. The government sector of our economy presents a great example of how labor can be diverted to uses that are non-productive. Since governments do not need to make a profit but can merely raise taxes to cover revenue shortfalls they tend to employ a lot of workers from which it demands little.

Several factors come into play when we are looking into the issue of productivity. Dependability sits high on this list. The ability to pound out a consistently good job is important. Mistakes cost money, sometimes lots of it. This means employees can be a curse as well as a blessing. Companies can be held liable for mistakes and problems flowing from the actions of employees. Often for years, even long after an employee has left a company is forced to pay for that worker's sins or inattention to detail.

Sadly, to many people profit has become a dirty word. These people don't understand that in a capitalist system profits are the lubricant that allows us to move forward. While some people are down on capitalism it remains the most responsive economic system because of its ability to rapidly adjust supply to demand. This is why such a system has a history of providing good products and services at the best price.

Businesses need productive employees that are dependable and productive. Productivity is particularly important to small businesses since they generally lack a lot of the expensive tools that their larger competitors can afford. The fact government regulations and mandates have added to the advantages big businesses have over their smaller competition. One of the biggest problems small employers face is that big competitors are constantly "poaching" their best workers simply because they can afford to pay them better.

While employers continue trying to find ways to reduce mistakes and errors, not every job can be "idiot proofed." The subject of "Productivity Matters" is important in that it dovetails with an article about the call for a mass strike all across America on Oct. 15th. The basis for such an event is the growing feeling that businesses and the U.S. government have failed to protect and properly serve workers over the decades. Those behind this strike say, "This demonstration serves to show your company, and our country as a whole, that you deserve basic human rights. Your labor is a bargaining tool, and you are worth more than what society is offering you."

If this so-called general strike garners enough support to bring a large part of the economy to a standstill it would be a real eyeopener and possibly be a watershed event. The backing of organized labor unions would add a great deal of kick towards making this a success. What those promoting this strike want is significant, their goals are listed below.

Below is a list of their demands which could be difficult to bring about:

At this point, America is in the grasp of a labor shortage flowing from several factors. These include not only people feeling they are not getting paid enough but the idea they have enough money that they don't need to work to get by. While those people that have made an effort to take full advantage of the safety net society offers claim "it ain't enough," it seems more than generous enough to meet their basic needs and allow them to get by.

Those proposing this display of laborer's dissatisfaction with the status quo say this demonstration will make the statement to your company, and our country as a whole, that workers deserve basic human rights. A worker's labor is a bargaining tool but in the end, what it is worth is related to their ability to be productive. While  many of the participants of such a movement are correct that some members of society are getting far more from the system than they put in, this is happening both at the top and the bottom. I contend that when all is said and done, the reality is many people don't understand that productivity matters.