I often forget that what may seem familiar to me or even many Americans is not always common knowledge, sometimes it is just a fact that has been drilled into me over and over. To those who are unfamiliar with the term Ponzi Scheme or just would like to know more about where it originated and such please read on. 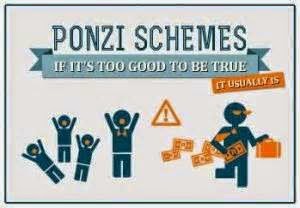 The Ponzi Scheme is a fraudulent investment operation that pays returns to its investors from their own money or the money paid by subsequent investors and not  from profits it earns. The Ponzi scheme usually entices new investors by offering higher returns than other investments. The perpetuation of the high returns requires an ever-increasing flow of money from new investors to keep the scheme going. The system is destined to collapse because the earnings, if any, are less than the payments to investors.  The scheme is named after Charles Ponzi who became notorious for using the technique in 1920. While Ponzi did not invent the scheme that was described in novels as far back as the 1850s his operation took in so much money that it gained massive notoriety. Usually, the scheme is interrupted by legal authorities before it collapses because as more investors become involved,  the likelihood of authorities taking notice increases.

Born in Italy Charles Ponzi arrived in Boston aboard the S.S. Vancouver,On November 15, 1903, he had $2.51 in his pocket, having gambled away the rest of his life savings during the voyage. "I landed in this country with $2.50 in cash and $1 million in hopes, and those hopes never left me," he later told The New York Times. He quickly learned English and spent the next few years doing odd jobs along the East Coast, eventually taking a job as a dishwasher in a restaurant, where he slept on the floor. He managed to work his way up to the position of waiter but was fired for shortchanging the customers and theft. For the next few months, he worked at a number of businesses, including his father-in-law's grocery, before hitting upon an idea to sell advertising in a large business listing to be sent to various businesses. Ponzi was unable to sell this idea to businesses, and his company failed soon after.

A few weeks later, Ponzi received a letter from a company in Spain asking about the catalog. Inside the envelope was an international reply coupon (IRC), the purpose of the postal reply coupon was to allow someone in one country to send it to a correspondent in another country, who could use it to pay the postage of a reply. He asked about it and found a weakness in the system which would, in theory, allow him to make money. IRCs were priced at the cost of postage in the country of purchase, but could be exchanged for stamps to cover the cost of postage in the country where redeemed; if these values were different, there was a potential profit. Inflation after World War I had greatly decreased the cost of postage in Italy expressed in U.S. dollars so that an IRC could be bought cheaply in Italy and exchanged for U.S. stamps of higher value, which could then be sold. Ponzi claimed that the net profit on these transactions, after expenses and exchange rates, was in excess of 400%. He would legally profit by buying an asset at a lower price in one market and immediately selling it in a market where the price is higher.

Ponzi borrowed money and sent it back to relatives in Italy with instructions to buy postal coupons and send them to him. However, when he tried to redeem them, he ran into an avalanche of red tape. Undaunted, Ponzi went to several of his friends in Boston and promised a 50% profit within 45 days, or 100% profit within 90 days, by buying discounted postal reply coupons in other countries and redeeming them at face value in the United States. Some people invested and were paid off as promised, receiving $750 interest on initial investments of $1,250. Soon afterward, Ponzi started his own company, the "Securities Exchange Company," to promote the scheme. As word spread, investors came in at an ever-increasing rate. Ponzi was able to hire agents and paid them generous commissions for every dollar they brought in.

By February 1920, Ponzi's total take was US$5,000, (approximately US$54,000 in 2010 dollars). By March, he had made $30,000 ($324,000 in 2010 terms). A frenzy was building, and Ponzi began to hire more agents to take in money from all over New England and New Jersey. At that time, investors were being paid impressive rates, encouraging others to invest. By May 1920, he had made $420,000 ($4.53 million in 2010 terms). He began depositing the money in a small bank, the Hanover Trust Bank of Boston in the hope that once his account was large enough he could impose his will on the bank or even be made its president; he bought a controlling interest in the bank through himself and several friends after depositing $3 million. By July 1920, he had made millions. People were mortgaging their homes and investing their life savings. Most did not take their profits but reinvested.

Ponzi was bringing in cash at a fantastic rate, but the simplest financial analysis would have shown that the operation was running at a large loss. As long as money kept flowing in, existing investors could be paid with the new money. This was the only way Ponzi had to pay off those investors, as he made no effort to generate legitimate profits. Ponzi lived luxuriously: he bought a mansion in Lexington, Massachusetts, with air conditioning and a heated swimming pool. He maintained accounts in several banks across New England besides Hanover Trust. He also brought his mother from Italy in a first-class stateroom on an ocean liner. When a Boston financial writer suggested there was no way Ponzi could legally deliver such high returns in a short period of time, Ponzi sued for libel and won $500,000 in damages. Libel law in those days placed the burden of proof on the writer and the paper, his win neutralized any serious probes into his dealings.

Still signs of his eventual ruin remained, Joseph Daniels, a Boston furniture dealer who had given Ponzi furniture earlier when he could not afford to pay for it sued Ponzi, it started people asking how Ponzi could have gone from being penniless to being a millionaire in so short a time. On July 24, 1920, the Boston Post printed a favorable article on Ponzi and his scheme that brought in investors faster than ever. At that time, Ponzi was making $250,000 a day. Ponzi's good fortune was increased by the fact that just below this favorable article, which seemed to imply that Ponzi was indeed returning 50% return on investment after only 45 days, was a bank advertisement that stated that the bank was paying 5% returns annually. The next business day after this article was published, Ponzi arrived at his office to find thousands of Bostonians waiting to invest.

On July 26, the Post started a series of articles that asked hard questions about the operation of Ponzi's money machine. The Post contacted Clarence Barron, the financial analyst who published Barron's financial paper, to examine Ponzi's scheme, he then noted that to cover the investments made with the Securities Exchange Company, 160 million postal reply coupons would have to be in circulation. However, only about 27,000 actually were. The United States Post Office stated that postal reply coupons were not being bought in quantity at home or abroad. The gross profit margin in percent on buying and selling each IRC was colossal, but the overhead required to handle the purchase and redemption of these items, which were of extremely low cost and were sold individually, would have exceeded the gross profit.

The stories caused a panic run, Ponzi paid out $2 million in three days to a wild crowd outside his office. He canvassed the crowd, passed out coffee and donuts and cheerfully told them they had nothing to worry about. Many changed their minds and left their money with him. However, this attracted the attention of the United States Attorney for the District of Massachusetts who commissioned Edwin Pride to audit the Securities Exchange Company's books, an effort made difficult by the fact his bookkeeping system consisted merely of index cards with investors' names. In the meantime, Ponzi had hired a publicity agent, William McMasters, he later described Ponzi as a "financial idiot". Finding several highly incriminating documents that indicated Ponzi was merely robbing Peter to pay Paul, he went to his former employer a paper that offered him $5,000 for the story. On August 2, 1920, McMasters wrote an article for the Post declaring Ponzi hopelessly insolvent. It claimed that while Ponzi claimed $7 million in liquid funds, he was actually at least $2 million in debt. With interest factored in, Ponzi was as much as $4.5 million in the red.

The story touched off a massive run on August 11, it all came crashing down for Ponzi. First, the Post came out with a front-page story about his activities in Montreal years earlier, including his forgery conviction and his role at Zarossi's scandal-ridden bank. That afternoon, Bank Commissioner Allen seized Hanover Trust after finding numerous irregularities in its books. This move foiled Ponzi's last-ditch plan to "borrow" funds from the bank vaults after all other efforts to obtain funds failed. With reports that he was due to be arrested, Ponzi surrendered to federal authorities on August 12 and was charged with mail fraud for sending letters to his marks telling them their notes had matured. He was originally released on $25,000 bail, but the bail bondsman withdrew the bail due to concerns he might be a flight risk.

The news brought down five other banks in addition to Hanover Trust. His investors received less than 30 cents to the dollar. His investors lost about $20 million in 1920 dollars ($225 million in 2011 dollars). As a comparison, Bernie Madoff's similar scheme that collapsed in 2008 cost his investors about $13 billion, 53 times the losses of Ponzi's scheme. Ponzi spent the last years of his life in poverty. His health suffered, a heart attack in 1941 left him considerably weakened, his eyesight began failing, and by 1948, he was almost completely blind. A brain hemorrhage paralyzed his right leg and arm. He died in a charity hospital in Rio de Janeiro, in early 1949. In one last interview to an American reporter, Ponzi said, "Even if they never got anything for it, it was cheap at that price. Without malice aforethought, I had given them the best show that was ever staged in their territory since the landing of the Pilgrims! It was easily worth fifteen million bucks to watch me put the thing over.

So, there it is, a cautionary tail, and a note to be careful out there. Caveat emptor - buyer beware!


Footnote; The post below deals with the changing value of an item, hope you find it interesting.
http://brucewilds.blogspot.com/2012/11/what-is-something-worth.html
Posted by Bruce Wilds at 4:23 AM