Something seems very wrong with the fact that soaring healthcare costs are a big factor in pushing America's GDP higher. This healthcare spending has slipped into the false narrative of a "growing economy" spoken by people with a poor understanding of what constitutes real growth. All this money being spent on healthcare feeds the illusion of growth, however, what we are really seeing is a transfer of wealth from one sector of the economy to another, then it is simply being recycled back into the system. Many people have seen large increases in their health insurance payments as a result of  Obamacare requirements. As it created a boom in the healthcare sector it has siphoned money away from other areas of the economy.

Over the last several years we have witnessed a shift in consumer spending. In many ways, the ACA often referred to as Obamacare feels like a tax on middle-class families and many businesses that have seen insurance cost rise. This started in the fourth quarter of 2013 as consumers rushed to beat projected increases in co-pays and premiums spurred on by Obamacare. While millions of people have gained insurance because of the Affordable Care Act, this has come at a cost, and it has also unleashed pent-up demand for medical procedures that have been delayed sometimes for years. All this has resulted in boosting out-of-pocket household spending on co-payments and soaring prescription costs. Americans spend more on healthcare than people in other developed countries with very poor results.

Part of the problem is that over the last several decades doctors, hospitals, and the healthcare industry has undergone tremendous change. Government policies were a huge driver in the trend towards consolidation in what was to yield higher efficiency and lower cost. Construction of expensive new hospitals over the last decade is resulting in higher bills for consumers. We should remember after the building ends so do the jobs in construction. Today we see hospitals backed by big government involved in a lot of activities in communities that extend far beyond their role as healthcare providers. In my community, it extends to sponsorship of the baseball stadium, ads on the side of buses, and a barrage of self-promotional "so-called" public service messages.

The BLS reported 71,000 new jobs in the general area often defined as health, education and social service, including state and local education jobs during May. We should be careful this does not give us a false sense that all is well.  This means the reported number of new jobs in this sector was close to double the net jobs gain of 38,000 jobs for the entire non-farm payroll. It is difficult to argue that low-interest rates or anything else the Fed is doing has anything to do with jobs growth in either of these sectors but rather a direct result of the government sector’s $3.5 trillion annual funding of medical entitlements and education, including the tax-driven provision of employer-funded health benefits to 160 million Americans. While these programs are all adding to our GDP they do not signal robust private sector expansion. 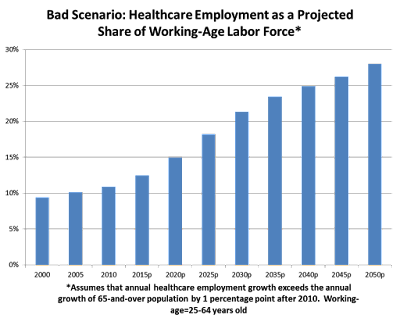 All the money spent by the pharmaceutical companies, hospitals, and insurers on things like advertising and promotion does indeed feedback into the GDP, but it also allows these companies to raise prices while adding little or questionable real value to the economy. Unlike manufacturing jobs that have long-term positive benefits such as building value that curbs imports and the flow of dollars away from America we find jobs in the healthcare sector often represent a transfer of wealth that drains assets from more promising areas. Also, adding to our concerns should be the trend that in future years more of the workforce will be herded into the health sector and the fact that many of these jobs are low paying. To make matters worse robots are being created to eliminate even these jobs. 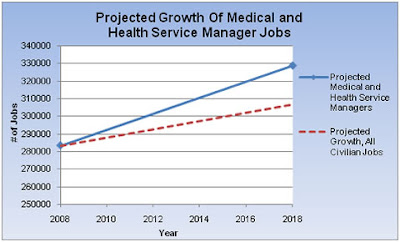 Last year an article titled "GDP Number Is A Master Illusion" explored how the GDP number was in truth a very poor reflection of true economic growth or its quality. A slew of fancy commercials and ads that urge and encourage consumers to see their doctors to inquire whether an expensive new drug with side effects that will have dubious benefits if any highlights the fact we are on a slippery slope. The long-term effects of Obamacare are slowly becoming apparent and by far the biggest problem is that it has driven healthcare cost through the roof for many Americans. The promise that this law would give the average family better coverage at a lower price has vanished into thin air. Much of the spending we see is driven by a huge and growing national deficit that lurks in the future.

The goal of this article is to highlight and make it clear healthcare spending that appears as growth, in reality, can mask a great deal of wasteful wheel-spinning, rather than a force that propels the economy forward to make America more competitive as a nation. The truth is that within an economy, how money is spent, what is being bought, and where the money comes from greatly influences the final economic outcome and defines the resulting wealth effect. Like a man paid to dig a hole then refill it with dirt, again and again, little of value is produced other than physical exercise. Americans should not become too exuberant about jobs being created in the healthcare sector if in the long-run we are forced to pay for them on the back end. We only gain if these jobs make us more productive, produce "real economic growth" or substantially improves both the health of the economy and Americans overall.


Footnote; Thanks for reading, your comments are encouraged. This post dovetails with several other recent writings. Related articles may be found in my blog archive. Below are two posts that you might find interesting. The first deals with the fact that healthcare in America is still a broken system and explores why Obamacare is destined to collapse under its own weight. The second argues that not all economic growth is created equal and that when you spend money but afterward have little to show for it, you have wasted it. When we look at government spending it becomes clear a lot of our problems come from the poor quality of growth.
http://brucewilds.blogspot.com/2015/11/healthcare-is-still-broken-system.html http://brucewilds.blogspot.com/2013/08/the-wrong-kind-of-growth.html
Posted by Bruce Wilds at 6:39 PM