The Financial System Isn't The Economy - Mind The Gap 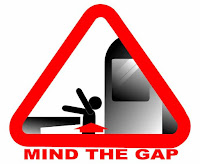 The financial system is not the economy even though many people do not recognize the distinction. This means the gigantic efforts by the world's central banks and governments to essentially "bail-out" both will prove somewhat ineffective. Covid-19 has become the catalyst for a major reset of both the financial sector and the Main Street economy, this article will attempt to give some clarity as to what we might find still standing on the other side of this crisis. Note the use of the word crisis, anyone who does not view the covid-19 now as a watershed event is oblivious to the world around them

Originally the title to this piece was "Mind The Lag-Time Gap - The Worst Is Yet To Come." You may call me Captain Obvious if you hone in on the later part of this title but the first portion is the most important part. We should make a real effort to remember to mind the gap between events appearing on the radar and when they actually impact day to day life. There is such a thing as lag-time, everything is not immediate in our fast-moving world, some events take time to play out. The covid-19 crisis is greatly complicated because we have no real idea of how long it will persist. Hints have been made, possibly to ready the population, that this could or will likely continue for months.

The scale, scope, and speed at which world markets have sold off and lost value as investors try to get in front of this thing has been dramatic. Global stock and bond markets have seen an estimated $25 trillion of 'paper' wealth erased in the last month. This has erased all the gains from the December 2018 crash lows with more of the impact focused on stocks than bonds. In its wake, the sell-off has stripped many people of their savings and jeopardized the future existence of many businesses and financial institutions.

On the flip-side of the carnage is the ramping up of promises that a flood of money and aid is forthcoming. All options are on the table to get money into the hands that need it, some of it in the way of adding liquidity, some of it as a gift to anyone with their hand out. The specifics are spotty at best but one thing we can be sure of is that those lobbying hardest will get the most. The questions that remain to be answered are, how well this will work and will this infusion of cash be enough?

As the world faces the biggest financial bailout in history it is now being reported in the news the US, in conjunction with the Federal Reserve, will now lend up to $4 trillion to businesses affected by the coronavirus pandemic. "Working with the Federal Reserve - we’ll have up to $4 trillion of liquidity that we can use to support the economy," Treasury Secretary Steven Mnuchin. told Fox News on Sunday. What Mnuchin, a former Goldman Sachs executive, did not talk about is how dangerous these volatile  markets are for the average investor.

Unfortunately, as with most programs unleashed by the "Financial-Political Complex," we can expect much of the money to rapidly flow to enriching those atop the wealth pyramid. Another certainty is that when all is said and done those in charge will rapidly claim things would have been far worse if they had not taken such draconian actions. People have shown they have a very short memory when it comes to the truth.  Many Americans also have a difficult time understanding a large reason for the rapid growth of inequality is because the wealthy one-tenth of one percent of the population controls and shapes the nation's policy to their advantage.

So far covid-19 is a new entry on to the scene. The reality of how it will affect the economy has yet to be realized and will trickle down to society. What I deem the Financial-Political Complex will protect its own with a massive bailout under the guise of "the greater good." This extension of crony capitalism will throw just enough to the masses to silence their outrage. Large businesses will be the winners while the big losers again will be the middle-class, small businesses, and social mobility.

A few of the things that may change society are detailed below. Many people think the impact on labor force participation will remain mild with workers viewing all this as transitory. As the impact of COVID-19 take root and if activity fails to rapidly normalize, it is possible more workers may reevaluate their life and decide to exit the labor force altogether. The same will happen with many small business owners that come to the conclusion this is a sign to close their doors and retire. Covid-19 has fed fear and insecurity, these are not feelings that increase investors' desire or take on new risks.

While you hear about the massive aid package the Financial-Political Complex is concocting to prop up this mess we should not forget they are responsible for much of the damage flowing from this crisis. For years they ignored the growing weakness on Main Street and focused on rising GDP numbers that were driven by government deficit spending. Addressing this now is like trying to turn a battleship around in a lake the size of a bathtub, nearly impossible. If it can be done it will take a long time. No matter how much money they throw at this the economy will not turn around on a dime or spring back. Regardless of how the financial sector fares the economy is destined to feel a great deal of pain.

We are in the second inning of a long game. It is only as this lingers that we begin to feel the full power of the lag-time effect. Anyone that thinks next month will be a return to business as usual and fails to mind the gap between expectations and reality is primed for disappointment. Too big to fail has become deeply embedded in our crony capitalist society and a key part of the Financial-Political Complex now running the show. If you are not part of this group I suggest you prepare to be thrown under the bus for "the greater good."
Posted by Bruce Wilds at 8:40 AM