Getting Good And Accurate Economic News Is Not Easy 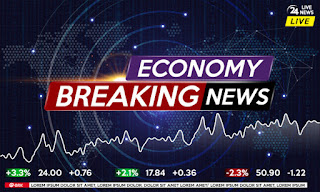 Obtaining good and accurate economic news is a huge challenge. The information flowing from the media or analyst is often so corrupted by bias or agendas that it can't be trusted. Another barrier to decent information is that these people tend to be so misinformed or lazy that they produce rubbish without conscience or effort. This is the reason we are given such silly explanations each day to justify market moves. This is also apparent in the way stock analysts at companies we have never heard of are given credit for moving markets.

Much of the lack of quality economic news stems from a general ignorance when it comes to economics and the fact in today's fast-moving manipulated markets it is impossible to come up with accurate details to account for what is happening. At times it is only by removing or evening out the peaks and valleys of a market move we can get a better picture of what is happening. Even looking back a consensus of why something occurred or who is to blame cannot be determined. It is often a case of too many cooks in the kitchen creating a stew that is uneatable with no sure culprit to hold accountable.

An example of unsound economic news can be seen in the way the media tends to overuse the "bad news is good news" line to explain why markets are moving in an illogical way. Things like running the same numbers for days when tallying the toll of those infected with covid-19 or simply contributing the market soaring to rumors is often a sign of  lazy stupid reporting. Taking the opinion of this or that source and claiming it accurately portrays what is happening occurs far too often. Still, if history is any indication, by the time these talking heads excitingly spew forth their lines with great conviction and a few of the latest buzz phrases, we are hooked.

Another problem is that investors wishing to be out front of the market listen to lying or overly optimistic politicians making statements about a bill intended to do this or that. Often these so-called bills are not likely to pass as portrayed or have not even been written. To top this off, many of the numbers they put out make little sense. This "bungling of numbers" is seldom questioned but can further muddle a confusing or misleading situation. It is best to remain skeptical and withhold trusting these clowns.

Years ago I stumbled upon a book by Jay and David Levy titled, "Profits And The future Of American Society." It presented a dramatic new perspective on capitalism by focusing on profit and how economic growth flowed from people and companies making money. At the time it was written little did anyone think the profit stream would be drastically altered by the financial sector exploding in size. The fact this happened at the same time the government increased its share of the economy and deficit spending soared has obliterated price discovery and how we value things. Another factor skewing valuations was that tax laws were changed to make investments in intangible schemes such as stocks more enticing.

Leasing to many businesses and also backing a few start-ups over the years has allowed me to see first hand how, why, and what makes an economy tick. It is frightening how many people go into business clueless as to how money is made but focused on the perks and glamour of success. Realistically, the value of a company should be based on real profits. While things like growth potential and how a company is taxed should factor into its valuation, the issue of its real worth should be solidly rooted in the profits its operation is able to earn. A lack of understanding in economics and the capitalist system has allowed the financial system to become a far greater part of the economy than it should be.

Over the last several years low-interest rates have allowed debt to increase at around two and a half times faster than the GDP. This trend coupled with savings flowing into stocks and other forms of paper promises has caused the value of these intangible assets to soar. This translates into a great deal of what people view as wealth being attributed to the value of intangible assets rather than linked to concrete and visible items such as factories, real estate or gold. The intrinsic value of intangible assets is simply what people are willing to pay for them based on the buyer's faith and little more. Simply put, the way we value assets both tangible and intangible is very different.

The appearance of covid-19 has brought a bit of common sense back into market valuations. Even with the Feds massive injection of liquidity and emergency rate cuts investors are being forced to reconsider stock valuations. The global supply chain was already under pressure because of the US-China trade war but covid-19 has not simply added an additional strain and large disruptions in product flows but it has blown it apart. Even a bigger issue is that large areas across the world are now being put under quarantine or regulations that are closing or limiting the hours businesses can be open.

The importance of the current reset may be under-reported in the news. Many businesses, especially smaller ones, will have a difficult time getting a loan. This means they will immediately begin to slow payments to creditors and vendors creating a liquidity crisis. Another issue is many businesses are deeply in debt or lack sufficient funds to survive tough times. Ramping up the central banks' printing presses and adding to what is known as government or public debt may not bring about the hearty long-term growth we seek, instead, it may simply add to inequality. If anything this action highlights the economy has become far too dependent on deficit spending by the government. Add the recent 2,5 trillion dollars now slated for covid-19 relief to the chart above and this becomes very clear.

The mainstream financial media has a very strong bias to positive news and tends to spin what is before them to reflect the news as an opportunity for investors. In what appears an effort to stay in the good grace of the Financial-Political Complex they seldom question Modern Monetary Theory or bring up the subject of our ballooning national deficit in a serious way. This is not suggesting that quality economic news is easy to generate but the bar has been set far to low and few so-called reporters of economic news are willing to make an effort to raise it. The one thing we can all be sure of is that getting real and well thought out reports and opinions will continue to take a backseat to feel good fluff pieces cranked out for the general public and those eager to put their money at risk.
Posted by Bruce Wilds at 5:01 AM