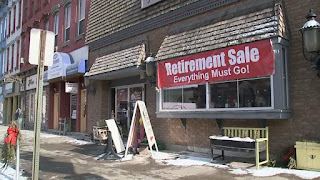 The massive 2,2 trillion dollar bill that was signed into law fails most small businesses but the devil is well hidden in the details. There is so much disinformation and bullshit floating around about this program that it is difficult to get the details. As a landlord and small business owner, I can tell you that as of Thursday morning the way the program is structured it will be of little help to most small businesses. While the government continues to slam expensive legislation through it seems they have no idea of the damage they are doing and how it is causing hundreds of thousands of businesses to close their doors forever. Washington has become so attuned to dealing with lobbyist from mega-companies it has lost sight of the fact small is small, and when this comes to business, this means usually under twenty employees, not hundreds.

It now looks like this bill will allow for a rapid maximum loan amount of two and a half times a company’s average monthly payroll expense over the past 12 months. This loan would turn into a grant and be forgiven if they keep their employees on. This fails to take into consideration that not all small businesses are labor or payroll intense. Some businesses with large or expensive showrooms are getting hammered by rent, others by inventory, or things like taxes, utilities, or even by having to toss products due to spoilage.

This bill also fails to address the issue of what are these employees going to do while the company has no customers because their cities are going into semi if not complete lock-down measures due to quarantine efforts. They also ignore the fact that by keeping these employees on the payroll a generous employer is left open to the harsh mandates laid out in the previous bill passed just weeks ago. And last but not least, many small business owners take little in the way of a paycheck and pump most of their earnings back into their company so it will grow faster. It appears little is being done for these companies and they are set to remain in dire straights.

With so many tenants looking at foregoing rent small landlords that don't have deep pockets also face huge problems. We have our heads in the sand if we think companies that exist on events where people gather will overnight regain their luster. It is not like someone can simply flick a switch and things will return to normal. Reality undercuts the idea of the “V-shaped recovery” theory and the idea after the economy has come to a dead stop it can quickly reboot and be back at full speed in a few months. Washington also seems oblivious to how much it can cost a community when a business fails. This extension of crony capitalism throws just enough to the masses to silence their outrage. Large businesses with access to cheap capital will again be the winners and the big losers are the middle-class, small businesses, and social mobility.

Even with governments pouring money into their economies and central banks adding massive liquidity animal spirits have taken a beating. Much of this can be blamed on the hastily drawn up 110-page federal covid-19 economic rescue package, which Trump fully supported. It dealt a hard blow to small business. The two major reasons existed for strongly objecting to the bill, first, we had no idea what it would cost and second, it totally missed its target while dealing a crushing blow to small businesses across America. Still, the measure sailed through the House with an overwhelming 363-40 vote in less than an hour after the text was released.

Prior to its approval, the National Federation of Independent Business (NFIB) pointed out many struggling businesses with two to twenty workers don't have the resources to weather the storm that it creates. The NFIB said in their letter of opposition, "The bill would impose potentially unsustainable mandates on small businesses' hurting not helping the backbone of our local economies." At the time they are experiencing increasingly slower sales is not the time to hit small businesses with a new mandate. Unlike government agencies, small business owners cannot turn to taxpayers when they can't pay their bills. For a small business this is a disaster, the bill requires;

As expected, this measure,  named "Families First Coronavirus Response Act." resulted in millions of workers to suddenly lose their jobs. Ironically, it was held before the voters as proof lawmakers could work together during a crisis.  By framing the poorly crafted pork-packed bill this way promoters positioned themselves to demonize those unwilling to support it. Remember, this bill is was in addition to the $8.3 billion emergency spending bill already approved to curb the spread of covid-19.

As for the President, many political pundits see Trump's declaration of a national emergency 15 minutes before the market closed on Friday a contrived stunt to rally stocks. In addition, his endorsement of this package is seen as an effort to mitigate damage from his administration's initially weak response to the crisis. Still, while we are told his job approval is rising many of us view what is flowing out of Washington as ill-conceived. Why will anyone want to work, especially government workers when they can get paid to stay home? How do you staff healthcare facilities when nobody comes to work?

President Trump may not understand at what point a small business becomes a medium or large business or simply doesn't care. Ironically, the members of the NFIB, mostly small business owners of privately-owned companies with fewer than 20 employees, strongly supported this same President that is throwing them under the bus.

By framing these pork-packed bills as bipartisan their promoters imply they are fair and balanced. This is not true, small business is the big loser and hundreds of thousands will soon have to close. The Covid-19 Rescue plan crucified our small businesses and the 2,2 trillion dollar bill that followed is a costly boondoggle mainly for the rich. Let me be clear, this is not about wanting more money for small business, it is about government not being able to clean us the mess it creates by simply throwing money at it. Please just stop!
Posted by Bruce Wilds at 4:56 AM