Trade Deficit Again Growing, Now It's Bigger Than Ever 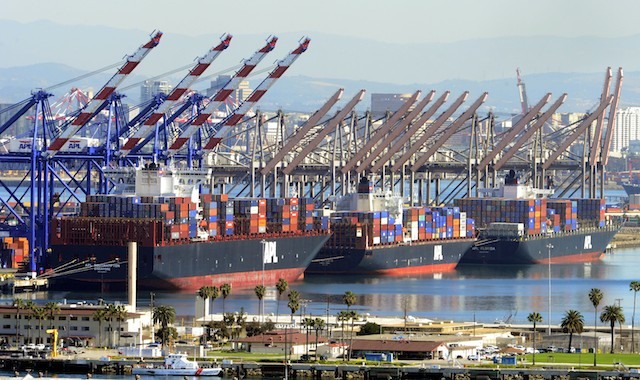 The trade deficit with China continues to weaken America and strengthen our rival. For all the ruckus it created, the trade war failed to bring down the trade deficit. Even while unusual circumstances continue to cloud the picture it appears that America's trade picture is in worse shape today than when it started. This is evidenced by the number of container ships from Asia lined up at American ports. The trade talks started in early 2017 and have dragged on with promises of a deal always around the corner. Looking back, we were told, they were always moving forward or nearing completion but such announcements generally proved premature.

Today, the trade deficit is growing and is bigger than ever. Those familiar with China and how it negotiates knew the Chinese would never agree to, or more importantly, honor any deal not strongly tilted in their favor. The events that unfolded and overshadowed the trade talks not only surrounded Covid-19 but more importantly how governments and central banks reacted to the pandemic. Here in America, a tsunami of freshly printed money was unleashed upon the masses creating the oddest recession in history. To be blunt, Americans saw their incomes soar while locked away in their homes and unable to attend work.

This of course resulted in consumers buying goods, many of them imported from China, rather than doing the right thing and paying obligations such as rent or mortgage payments. In fact, our government with little thought to the long-term ramifications, added fuel to this buying binge when it rapidly imposed a moratorium on evictions and foreclosures. This means we should expect the controversy over just how much trade contributes to America's economic growth to again rise as growth slows. Trade between countries is given far too much credit for being a big driver of our economy than it deserves and can actually become a drag.

The fact is if John needs to buy a wheelbarrow for work it does not matter where it is built. John needs and will buy a wheelbarrow. Where trade does fit into this has to do with what country employs workers to make that wheelbarrow and how much it will cost. While John may save money if the wheelbarrow was produced in a low-wage country trade has more to do with who benefits from commerce and should not be seen as a force driving us forward.

In many ways, trade should be seen as a way to increase access to a greater variety of goods at a better price but this only works over a long time if it is balanced. A county that constantly enjoys a trade surplus at the expense of its trade partners often reaches a position to exploit the weaker countries and generally does so. Throughout history, trade policies have had massive long-term ramifications on the strength of a nation's economy. 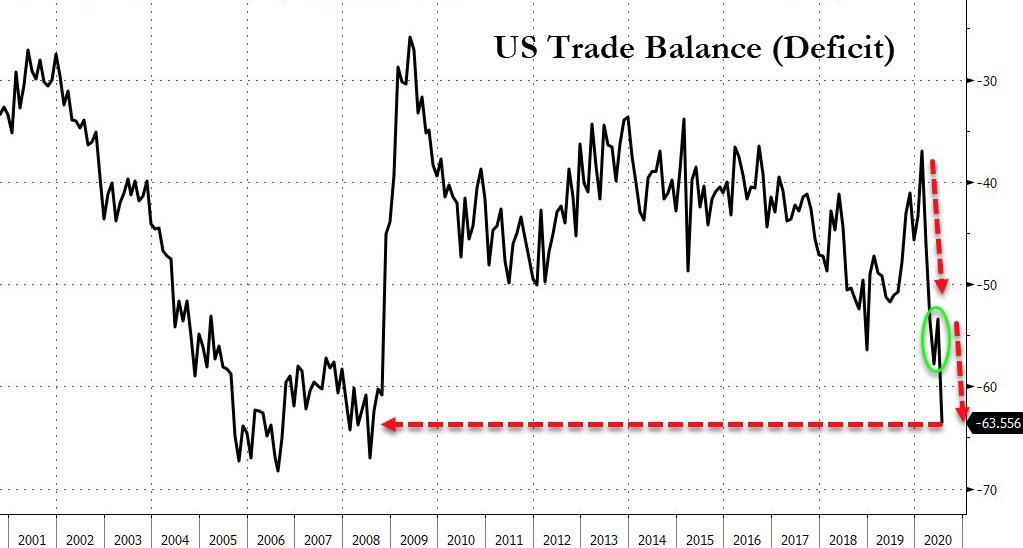 With this in mind, Americans should be concerned the U.S. trade deficit jumped 18.9% in July of 2020 due  to a leap in imports. The trade gap increased to $63.6 billion from $53.5 billion in the prior month. Imports shot up 10.9% while exports advanced 8.1%. Because people tend to forget or brush aside the fact that for years America has imported far more than it exports, this is not good news.

The increase in both imports and exports was at the time promoted as a good sign saying it pointed to stronger consumer spending at home and increased demand for American-made goods abroad. In the shall we say, excitement, what few people wanted to talk about was that according to Commerce Department this number was notably worse than the expected deficit of $58 billion and is the widest trade deficit since 2008 when Americas pulled back on spending and fell into a funk.

Critics of America's existing trade policy say trade deals over the years have failed to deliver on what they promised. Instead, they have added to environmental problems across the world and exacerbated economic inequality within many economies as manufacturing jobs have been outsourced to low-wage countries. Some activists also claim these deals can curb freedom of speech on the internet and other detractors say it incentivizes currency manipulation. 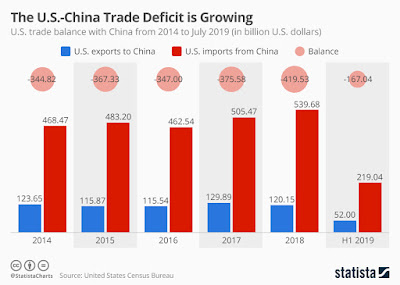 When viewing the global economy we should consider that much of the "free trade" movement has been fueled by the mega-companies desire for larger markets and greed. The desire of big businesses to both develop and control future rules has caused them to lobby governments into giving up control and becoming subservient to corporate “efficiency.”

The promise that increased trade will create new jobs has turned out to be largely a myth. History has shown that trade agreements with low-wage nations are not the great job creators we have been told. The idea trade is a huge benefit to the masses flows from large multinational companies that have the most to gain. It is difficult to deny that in our modern world these large companies already have more power than most nations and their power continues to grow at an alarming rate.

It would be fair to say that not everyone was a fan of Trump's trade war strategy or that it was well executed. This included many of America's mega-companies that moved production overseas years ago to exploit cheap labor. Several of these mega-companies opposed any policy that would  harm their profits. Putting their interest before America, such companies and their lobbyists mounted a well-funded propaganda campaign against the trade talks based on the idea consumers will be forced to pay higher prices which would hurt the poor.

Trade is not a big driver of the economy as often claimed, instead, it can greatly weaken a country sapping its strength. Trade benefits multinational companies. The money they wield has hijacked the conversation about how much benefit trade creates. I contend that trade shifts growth and jobs from one country to another rather than simply adding to growth in a substantial way. In many ways, the global economy has become an ill-regulated business model tilted to favor big businesses and giant conglomerates. This translates into the companies and their owners or shareholders benefiting far more than the economy in general. It is not difficult to make the argument this has been harmful to the smaller domestic companies that generate many jobs here in America, Apple is a prime example of this.

Circling back to the example of John and his wheelbarrow used at the beginning of this article, it is wise to remember that the economic cycle is rooted in reality.

John only needs so many wheelbarrows, when he has enough, he stops buying them until they are worn out and he needs more. Low-interest rates, super sales, and easy credit can only stimulate growth in these sales so much, and often it is at the cost of future sales.

As the economy slows and trade tensions rise expect more fingers to point at sagging trade as the culprit. The fact is, no matter what we have been told by those with an agenda, trade between countries is only a win-win if it is balanced. Also, it is not a big factor in producing quality and sustainable economic growth. Still, we hear the narrative spun by politicians playing the "fear card" with statements such as "We can’t let countries like China write the rules of the global economy.” This implies we will lose the power to control our own fate if we stand firm and refuse to embrace the wishes of large companies.

I am not alone in recognizing China's reliance on an age-old and tested Asian negotiation technique, call it a tactic or style if you like, but it is deeply rooted in wearing down your opponent over time. China intends to exploit the advantages a state-driven economy has over free enterprise while expanding its military armed with a slew of modern cutting-edge weapons. China is a state-run economy based on a business model that is geared to expand by crushing the competition. Subsidizing those companies working within its system in a multitude of ways helps it achieve this goal. China's practice of exporting goods at slightly below cost in exchange for manufacturing jobs is not stupid, it's predatory and we are its prey.