The CPI Revisited And Its Failure To Reflect True Inflation

The cost of living numbers prepared by the Bureau of Labor Statistics are highly misleading. Currently, the government understates inflation by using a formula based on the concept of a “constant level of satisfaction” that evolved during the first half of the 20th century in academia. This extended into the BLS re-weightings sales outlets such as discount or mass merchandisers with Main Street shops. Those promoting this change claimed it was simply another way to measure inflation and it still reflected the true cost of living.
The fact is, politicians and those behind this system created it as a way to reduce the cost of living adjustments for government payments to Social Security recipients, etc. By moving to a substitution-based index and weakening other constant-standard-of-living ties those reporting inflation have muddied the water as to just how much we are being impacted by inflation. The general argument used to promote this change was that changing relative costs of goods results in consumers substituting less-expensive goods for more expensive goods.
Allowing for a substitution of goods within the formerly "fixed-basket" supposedly allows the consumer flexibility in obtaining a “constant level of satisfaction." This adjustment to the inflation measure was touted as more appropriate for the GDP concept in measuring shifting demand and weighting actual consumption. Other tricks were also used to give the illusion of less inflation. In cases where the quality of the product are deemed by the government to be "improved" prices in the CPI, calculations are now adjusted lower to offset the higher quality. Extending this idea the Baskin Commission Report, December 4, 1996, actually used steak and chicken for its substitution example.
The purpose of the consumer price index (CPI) is touted to reflect just how much inflation is eating into both our incomes and our savings. Consumer inflation has been estimated since the 1700s, by measuring price changes in a fixed-weight basket of goods. This method was seen as a way of measuring the cost of maintaining a constant standard of living. In the last 30 years, a growing gap has become obvious between government reporting of inflation, as measured by the CPI, and the perception of actual inflation held by the general public.
A clearer indication of inflation can be witnessed during a shopping trip to a grocery store or stores such as Walmart. Sadly, what we see is the type of inflation that directly impacts many of the consumers that can least afford it. Recently product manufacturers like Coca-Cola, Pepsi, and Procter & Gamble all started raising prices across the board, which means that "something has to give." Retailers can only absorb so much of these increases before being forced to pass them on to consumers. Walmart values low prices and it is a key part of their marketing strategy but higher wages, transportation costs, and e-commerce investments have all pressured Walmart to bump many prices higher. 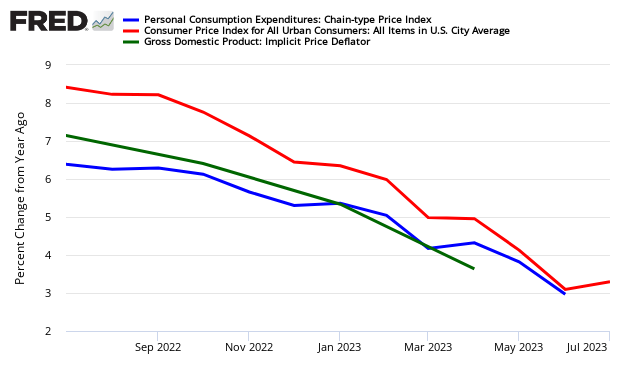 Many smaller specialty retailers like O’Reilly Automotive and Tractor Supply Company have also been hiking prices. Many of these hikes have been blamed on the trade war, supply chain disruptions, or shortages but the economic reality for what is occurring goes much deeper. When it comes to assessing real-world inflation that is having a direct impact on consumers, the Fed has been conspicuously absent from this important conversation.
For years consumer prices have been held down by America importing goods from countries with cheap labor. This has a hidden cost which is the loss of manufacturing jobs. Another issue is that inflation varies drastically from one sector of the economy to another. Still, the day-to-day increases in prices we see add credence to the informal evidence and occasional surveys that indicate the general public believes inflation is running well above official reporting. The numbers government pumps out today are politically motivated and the result of changes made in the 1990s when Washington moved to change the nature of the CPI.

These changes were promoted under the cover of academic theories and the sinister move was masked by the contention was that the CPI overstated inflation. Katharine G. Abraham, then commissioner of the Bureau of Labor Statistics, laid out her recollections in an August 1996 paper: “Back in the early winter of 1995, Federal Reserve Board Chairman, Alan Greenspan testified before the Congress that he thought the CPI substantially overstated the rate of growth in the cost of living.  Greenspan's testimony generated a considerable amount of discussion but the general public paid little if any attention. In truth, the cuts in reported inflation were part of an effort to reduce the federal deficit without anyone in Congress having to do the politically impossible which was to register a vote that would harm the image of Social Security.

While the substitution-related alterations to inflation methodologies were made beginning in the mid-1990s the introduction of major changes to concepts geared towards making us feel better about things began in the 1980s. The aggregate impact of the reporting changes since 1980 has been to reduce the reported level of annual CPI inflation by roughly seven percentage points meaning there is no question as to the understatement of inflation. If the methodological changes did not reduce CPI inflation reporting significantly, the politicians would not have pushed the changes through. The important issue is that without these changes, Social Security checks would be more than double what they are today.

A big factor in our "false cost of living" is that the purchasing consumer is not given a choice when paying out-of-pocket the full price for a product declared to have quality improvements they do not want or need. An example of this is the government-mandated use of a gasoline formulation that was to improve auto emissions. It added ten cents per gallon to gasoline costs, but that cost was excluded from CPI calculations even though the person filling his or her gas tank suffered the actual out-of-pocket expense. This is also clearly seen in new phones, computers, and televisions. New features are deemed quality improvements resulting in downside price adjustments to the CPI even when the consumer may not use or want them. Also absent from this formula is recognition of how housing prices vary so greatly across the nation.

To understand how just how large the impact has been on the CPI it is important to note that 24.0% of the total current CPI-U (the CPI for all urban consumers) is rooted in the category of “homeowners’ equivalent rent of residences.” This means that instead of reflecting some measure of home prices, as was the case before 1983, the BLS estimates the cost of housing based on what homeowners theoretically would pay to rent their own homes from themselves. The BLS then estimates how much homeowners raise the rent on themselves each month. Starting in 1989, the BLS skewed these estimates further by beginning to adjust that imaginary series for quality adjustments that would make the consumer feel good or better enjoy their residence.

Years ago when America was experiencing what the late Allen Meltzer described as "The Great Inflation" his take was that inflation generally was not considered a major problem until it rose into the double-digit area. I maintain the manipulation of data to artificially lower the official rate of inflation feeds into the illusion of economic stability. This helps both politicians and central banks sell the idea that inflation is not and will not become a problem. This false information is then used by individuals to plan and make decisions concerning their investments and retirement needs. I further contend that inflation would be much greater if more money was flowing into tangible goods rather than paper investments and promises. For proof as to the real cost of inflation just look at the surging replacement cost resulting from recent storms and natural disasters. Beware, if you are taking the CPI numbers being reported to heart you will pay dearly in the coming years.
(Republishing of this article welcomed with reference to Bruce Wilds/AdvancingTime Blog)
Posted by Bruce Wilds at 8:47 AM