The EU Is At Risk Of Becoming Subservient To China

The EU is taking the path of strengthening its ties to China in the hope it will spark an economic renaissance. The Euro-Zone was already in deep trouble before CoVid-19 hit. Argue as you may but the bout of economic weakness that started in 2017 never ended. The latest scheme cooked up by Brussels seems more of its policy to extend and pretend all is well. The EU abandoned all structural reforms in 2014 when the ECB started its quantitative easing program (QE) and expanded the balance sheet to record-levels. Playing into Europe's problems is that in 2019, almost 22% of the Euro Zone GDP gross added value came from Travel & Leisure, a sector that will unlikely come back anytime soon.

To avoid the union coming apart at the seams the European Commission last year unveiled an unprecedented  €750BN CoVid-19 recovery plan. It consisted of €500 billion in grants to member states and €250 billion in loans. This means those in Brussels are seeking a major extension of their power to where they can borrow money under the premise it will aid in ending the worst recession in European history and at the same time shore up Italy. This would result in transforming the EU’s governing body in Brussels by allowing it to raise unprecedented sums on the capital markets to shore up hard-pressed EU countries.

Roughly 80% of the Euro-Zone's real economy is financed by a banking sector that carries more than 600 billion euro in non-performing loans. Unemployment is also a problem, almost 30% of the Euro Zone labor force is expected to be under some form of unemployment scheme for years. France, Spain, and Italy, with important rules and tax burdens on job creation, may suffer large unemployment for even longer. As of 2017, not a single European company ranked among the top fifteen technology companies in the world and only four of the top 50 global technology companies are European. This is why skeptics are concern that if the politically directed "Green New Deal" agenda doesn't boost growth or reduce debt the Euro-Zone will remain economically stagnate. 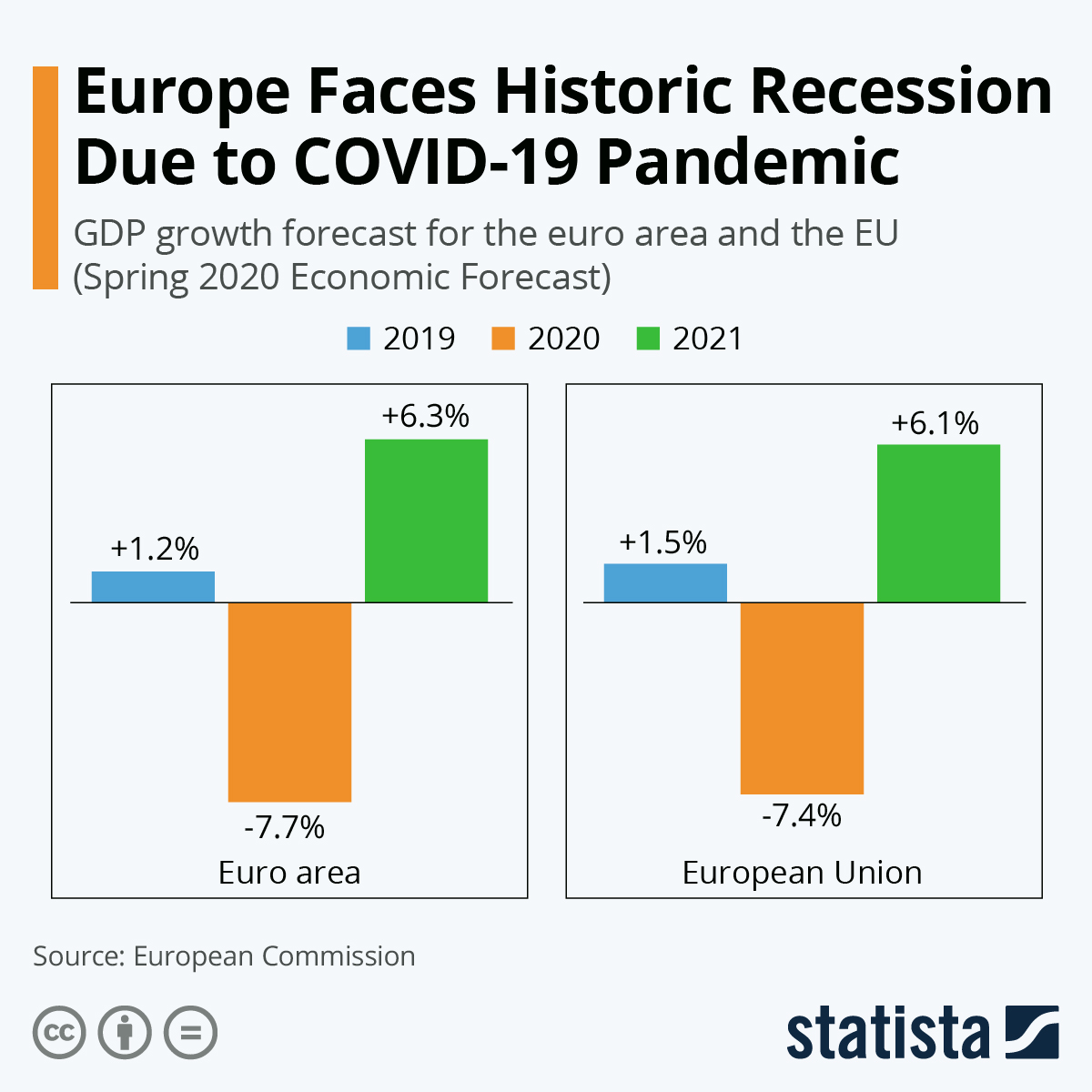 The elephant in the room is that the Euro-zone region simply isn't competitive. The EU lacks technological and intellectual property and is falling further behind the U.S. and China. Germany, the regions manufacturing powerhouse continues to skirt along narrowly escaping recession while France, Spain, and Italy face years of large unemployment levels. It was clear that the EU was struggling in the spring of 2020 when the European Commission sharply revised lower its economic growth forecast for the area due to Covid-19. So far, the European Commission's expectations its economy would rapidly rebound have been dashed by a second wave of the pandemic.

To generate the impression of hope the EU's leaders in Brussels are trying to pull a rabbit out of the hat by strengthening ties with China. The Guardian recently reported that China and the EU now appear to have resolved their differences over protecting labor rights in China and are set to sign a long-delayed investment agreement. This would strengthen ties between them and make the economies of the two blocs more interdependent. The investment talks address opening up Chinese markets for European investment, as well as addressing Chinese practices opposed by the EU concerning industrial subsidies, state control of enterprises, and forced technology transfers.

A sticking point for the talks launched in 2013, has been the treatment of Uighur Muslims, and the systematic suppression of free speech in Hong Kong. At the heart of these talks has been the EU's concern about these issues and how to enforce and arbitrate other parts of the agreement. It must be noted the same members of the European parliament have in the recent past passed resolutions condemning the use of forced labor in China must ratify the agreement. Also, America and the incoming Biden administration are far from happy about the EU-China comprehensive investment agreement which signifies a significant shift in EU policy towards Asia.

The proposed deal dovetails with Beijing's "One Belt, One Road" (OBOR) initiative and follows the signing of an agreement made with Italy which is viewed by many as bankrupt. Last year, in what might be considered a bold move the Italian Prime Minister signed a historic memorandum of understanding with Chinese President Xi Jinping in Rome. The agreement made Italy the first founding EU  member, and the first G-7 nation, to officially sign on to OBOR in hopes it would shore up its weak prospects. The ramifications flowing from Italy's deal with China may, in the end, prove to be a deal with the devil.

The key motivation behind China working to reach a deal with poor, weak, but lovable Italy was its desire to exploit Italy and use it as a backdoor into the broader Euro-Zone market. The deal China and Italy inked contained development deals covering everything from port management, science and technology, e-commerce, and even soccer. The reality is that China is eager for control of entry points into the European Union that can be lawfully expanded upon. This does not bode well for the region.

While in the past, Europe has enjoyed a trade surplus with America year after year this has not been the case when it comes to China. According to data from Eurostat, the EU had a 153 billion euro ($180.3 billion) surplus with the U.S. (meaning it exported more to the U.S. than it imported) in 2019. The European Union is China's second-largest trading partner but imports far more from China than it imports. These sort of numbers are not outliers but certification of a trend that has been growing for years. Simply put America has been carrying Europe on its back and the money and wealth that flows from America to Europe quickly finds its way to Asia.

Below are the import and export figures with China from 2018 in billions of US dollars.