Reassurance from central banks is only emboldening investors to add to their risks. Regardless of what he says Fed Chair Powell has confirmed the Fed plans to continue its role as the great enabler. Every time the Fed signals more easing or that it will keep rates low it boosts the ability of other central banks to do the same and governments to add to their stimulus packages. This is why those demonizing the dollar may be wrong, if anything all fiat currencies that are under pressure from this expansion of the money supply.

Central banks across the globe have been able to lower their rates or do additional stimulus without causing concerns their currency would crater. The fact that so many loans across the world are based and loaned in dollars means countries and businesses must buy dollars to repay their obligations. This puts a bit of a foundation under the dollar going forward. It could be argued the reason several countries have reduced their US Treasury holdings is not that the dollar is slated to fall but is more related to the fact they have problems at home and need dollars in order to service their debt obligations.

Adding to the complexity of money flows is that America's stimulus packages are simply putting more icing on China's cake and the other countries that enjoy a trade surplus with America. We are carrying the world on our shoulders. Rather than paying rent or making mortgage payments, it seems from the exploding trade deficit that Americans are taking much of the money they get from Uncle Sam and buying imported goods.

When Powell attempts to explain his continued actions, many of us who pay attention to such things cry "Bullshit." Not only is the current Fed policy uncalled for but it does little to strengthen the economy or address our problems. What it will do is continue to prop up asset prices and encourage risk-taking and malinvestment. This is a big deal and will result in more negative interest rates across the world. Due to the artificially low cost of credit and an unsustainable increase in the money supply bubbles are forming everywhere.

The suggestion that the global financial system was in big trouble even before Covid-19 entered the picture and the pandemic has been used to shift blame and focus away from the governments and central banks that have failed us is full of merit. The situation we are witnessing is not from a failure of injecting enough liquidity into the system but that liquidity is being diverted from where it is needed. The idea more liquidity can make up for a solvency problem is unrealistic and turned failing companies into zombies.

The market has reached the point where profits are no longer required to generate a return on investment. Bubbles represent a major disconnect from reality. Companies borrow money extremely cheaply by issuing corporate bonds, use it for stock buybacks and shareholder dividends. thus furthering the disconnect between the value of stocks and the economy on Main Street.

While Nasdaq is banging out a new record high and Bitcoin also hitting all-time highs, much of the world remains locked-down due to the covid pandemic. Much of what is happening on Main Street is being ignored. Much of bitcoin's surge is attributed to growing inflation expectations based on the debasement of currencies. The rise in stocks is also coupled to the expected future economic relief packages that will soon roll out of Congress.

Adding to our future economic woes is that the Feds easy policy strongly favors big business. This results in the destruction of many small and medium-sized concerns. This has caused inequality to surge during the rash of lock-downs. We are yet to see the massive toll people working from home will take on office buildings or the total devastation online shopping has unleashed upon retail property. The fact that many businesses cannot pay their rent or mortgage payments is a "lag time event " that will only show up over time.

Investors hope to see a big pop in consumer spending due to another round of checks being put into the hands of individuals. This expected bounce in spending may fall short of expectations. Where the massive package passed last spring caused the bizarre situation of incomes rising during a recession this is more a scaled back continuation of expiring programs. It would be wise to remember what we are witnessing is constructed on a foundation of growing debt. This is made clear in the chart below which shows the change in Debt-to-GDP from Q42019 through Q3 of 2020. 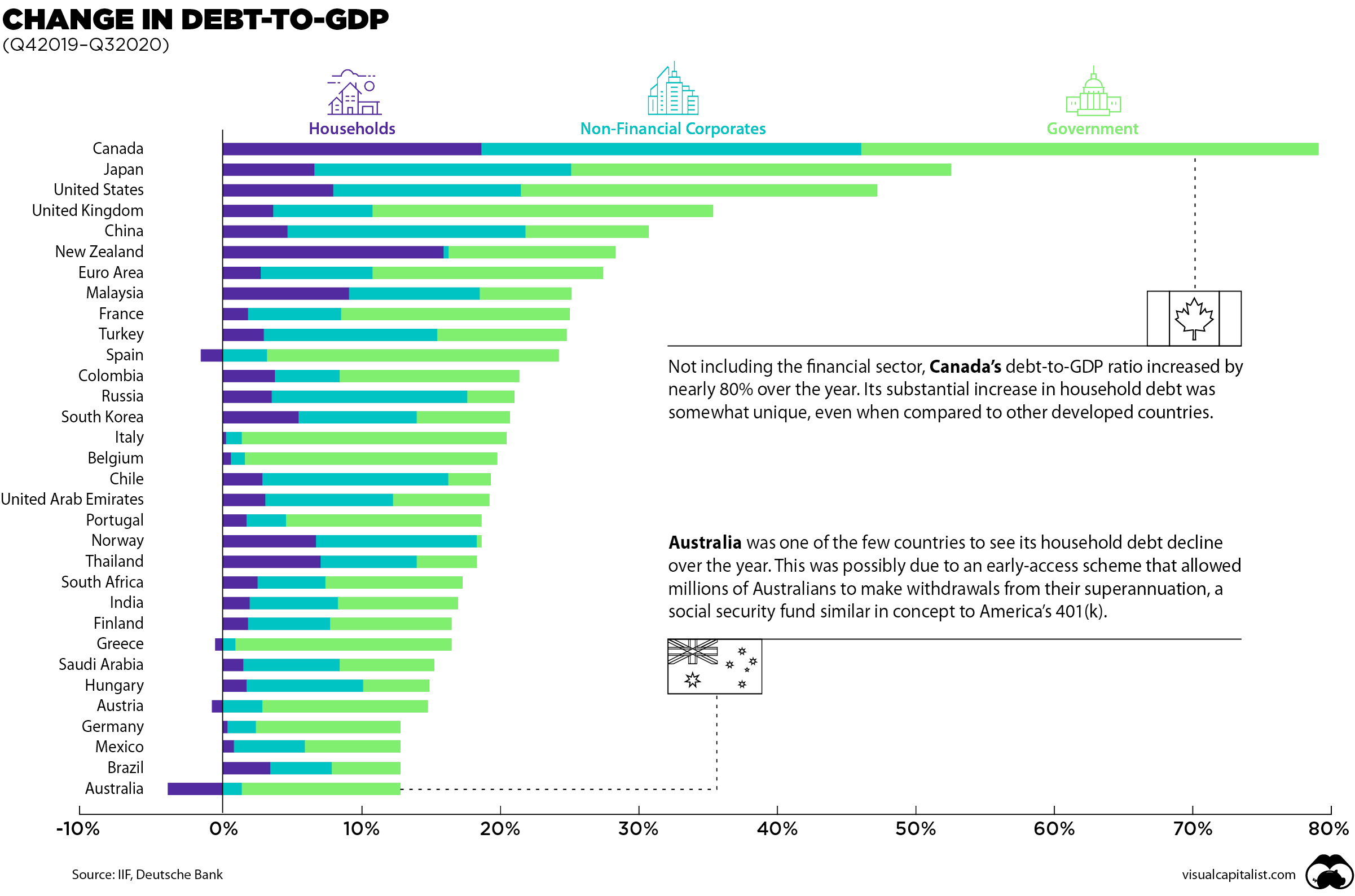 In the Austrian business cycle theory, malinvestments are badly allocated business investments, A strong case can be made that we already suffer from far too much leverage in our markets and this rate cut only encourages savers suffering from low-interest rates to take on more risk in search of higher yields. It has been pointed out on many occasions that low-interest rates do not extend down to low-income individuals with poor credit and many people fall into this category. Instead, over time these rates fuel inequality and punish the poor. Unfortunately, the concept that a rising tide floats all boats or trickle-down economics tends to heavily favor the rich.

We see this in housing where few of the new apartment construction funds are generated locally and much of the building is no-longer based on real need but centered around the whims of huge real estate companies. This is part of the reason roughly 80% of new apartment construction is now for the high-end luxury market. Again the government and Wall Street money is driving this train. While retailers close and large buildings go empty across the land new buildings are being put up on speculation and bogus public-private partnerships are plowing vast sums of money into projects geared to compete with those that already exist. the fact is all across America the Fed is putting the small guy out of business.


The stock market and not the economy. People that point to the market as proof that all is well put stocks in front of the real indicator of our economic strength which is the middle and lower class. The disconnect between the working people and the financial community is apparent in the difficulty people with small businesses have getting loans or financing a project while big business is fed billions of dollars by the banks and Wall Street. If anyone is losing confidence in the system it is these people. This is not a problem Biden or any politician can solve with government social programs.

At some point to reestablish true price discovery it will be necessary to break the well-ingrained habit of "buy the dip." This method of trading has worked since October 19th, 1987 when the Dow Jones Industrial Average (DJIA) dropped 22.6 percent in a single trading session. That is the day the actions by Fed Chairman Greenspan galvanized the mantras "buy the dip" and "don't fight the Fed." Greenspan did this by affirming the Federal reserve would be there "to serve as a source of liquidity to support the economic and financial system."

The trading patterns flowing from investors buying the dip are now ingrained in the algorithms embedded deep inside the computers that drive much of the stock market's action. As noted earlier, to the chagrin of those with a negative view of the Fed, Powell has confirmed the Fed plans to continue as the great enabler. The rapid expansion of debt and credit during the last decade could not have occurred without the Fed being complicit. When things move too far in one direction adjustments do occur. Do not be surprised if the dollar again jumps higher as the reality sets in that many countries will do far worse than America in the coming months. For now, we watch and wait while the market again tries to discover its true value both here in America and across the world.