For those professing a preference for one type of government over another, an ugly reality is they all cut from the same cloth. Whether we are talking about Democracy, Communism, Socialism, or Fascism the strong link they share is one of dominance and a desire to control. While seen as vastly different systems with distinct goals, each is rooted in the promise people should sacrifice as needed for "the greater good." The main flaw in a democracy is that it allows a simple majority to force their desires upon others. This is why our forefathers set checks and balances in the Constitution, however, even these do not guarantee freedom will remain.

Today, the burden of risk and the amount of "skin in the game" is not equally shared by all of society. Over time our financial system and institutions have been corrupted by crony capitalism and a political system that panders to the masses by exchanging favors for baubles. It could be argued that those in power don't have to take away our freedom by force if we are willing to surrender it or trade it for a few paid weeks off work. Nor do they have to be fair in how they go about this if they simply get a majority of the populace to go along with their plan.

The suspicion governments are self-serving creatures is apparent in the old school British imperial definition of “commerce” which used free trade as a cover for the military dominance of weak nations. Those put in a position of being exploited often saw this as simply a ruse promoted by those wishing to abuse them. In short, opening borders and turning off protectionism simply makes it easier to rob countries of their wealth. America, a wayward child of England, has been accused of following this same path. In my last article titled, "The first Global Inflationary Depression Is Possible" a case was made that the world was headed towards an economic crisis due to several factors. The problem is that such a scenario encompasses all aspects of life, from food and energy, to supply chains, geopolitics, and possibly even war. This article is an effort to offer up some ideas on how governments might respond to such an event based on current trends and some of the events that have occurred during the covid-19 pandemic. If we accept the idea that governments are self-serving and that a huge majority of the people suffer during an economic depression, we should expect frictions to develop as the populace seeks solutions to ease their pain.

Sadly, governments across the world have overreached and crushed the rights of individuals during the pandemic. People have been denied the ability to travel, locked in their homes, followed by drones, and even been jailed. This may have been just a taste of what we might expect if governments are put under pressure to perform. Many people have pointed to the fact that in the past "war has been the go-to answer" often used to take our eyes off of problems. Hopefully, that will not be the case, however, many of the other options possible in the age of almost total surveillance do not seem much better.

It is wise to remember that when all is said and done, those in power will not be kind to us but they will rapidly throw us under the bus without a thought. Silencing dissidents or those that protest or disagree by limiting free speech is only a start. Lock-downs and curfews take on a whole new meaning when harshly enforced. They can include things like house arrest, cutting power, links to the internet and communication, and even water to areas where unrest gets out of hand. You can expect governments to remove anything that gives us the power to control our fate.


The topic of our future and culture always circles back to and is directly linked to the issue of jobs vanishing as automation and an army of robots march into our workplace. This can result in a future that takes on a very grim dystopian appearance. The fear of being replaced by a robot or seeing your job being outsourced or eliminated is on the rise. Do not be surprised if in the end those displaced from the job market are only given enough to ensure they remain docile and behave. If and when this becomes an issue conflict and violence will arise.

While some people credit Rahm Emanuel with the saying, Winston Churchill was the first to say, “Never let a good crisis go to waste.” He said it in the mid-1940s as we were approaching the end of World War II, and history indicates those in government have taken heed. The one thing we can count on is that when things crumble, the old, "we should have done more" or the "it would have been far worse" lines always flow forth from those in charge. Under this logic, we should be prepared to be subjected to massive abuse by those with strong agendas.

Possibly, one of the most dire threats we face flows from the combination of big tech and those in pursuit of the highly touted one-world agenda. This brings together a slew of organizations, governments, companies, wealthy, individuals, and bankers with the goal of expanding their power. The gathering in Davos of the World Economic Forum is not for our benefit but more for plutocrats like Facebook's Mark Zuckerberg and Amazon's Jeff Bezos that desire to "break the world" with their ruthless agendas to bring more political power into their hands. Recently a great deal of attention has been given to some of the ideas and vision the WEF has floated. One of the most powerful became visible when WEF public relations released a video entitled: “8 Predictions for the World in 2030. Its 2030 agenda offers a telling glimpse into what the technocratic elite has in store for the rest of us. It promotes the idea that  by 2030 "You will own nothing. And you'll be happy.

How do you begin to fight or turn back a force that has even incorporated and leveraged the ever-present smartphone as an ultra-powerful surveillance device? By developing programs to organize phone data so that it provides real-time intelligence on every citizen, and using it to guide and influence our actions the power of the state has been deeply enhanced. The digital age has made it far easier for government to seize our computers and records to shape a case against anyone by massaging the data as they see fit. The reason we hear so little criticism of these actions from our government may be that we are next in line to have our freedom culled. Governments are not the friend of the average man. Orwell wrote about how governments could take on a life of their own and criticized totalitarianism throughout his writings. 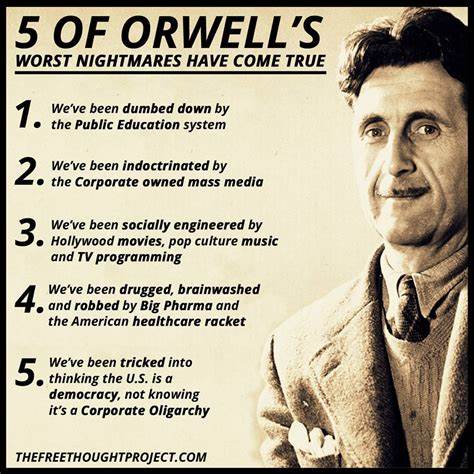 Totalitarianism, the most extreme and complete form of authoritarianism is a political concept that defines a mode of government, which prohibits opposition parties, restricts individual opposition to the state and its claims, and exercises an extremely high degree of control over public and private life. Political power in totalitarian states is generally pushed by those on the far left or right with strong agendas and an all-encompassing propaganda campaign, which is disseminated through mass media. Signs of its growth are often marked by political repression, growing control over the economy, restriction of speech, and mass surveillance.

Of course, a huge step in individuals losing control over their lives would be the adoption of a single world currency. Those in charge of our financial machinery have indicated to the public their desire for more power. This means creating a truly global centralized economic system and a highly controlled world currency framework dominated by a select cult of banking oligarchs. This would, in effect makes the rest of the human race their slaves. The banking elites are positioning themselves to avoid blame for a disaster in which all fiat currencies fall in value by selling us on an elaborate recovery con-game which includes converting to a new worldwide currency. Remember, this is conceived and perpetuated by those with the most to gain.


For years the IMF has been discussing replacing the dollar with the SDR as the world reserve currency. It would require governments to borrow from the world central banking authority, rather than printing currency to finance their infrastructure programs. With governments floating the idea of going cashless and to digital currencies, this would give them even greater control over our lives. To be clear, the elites are positioned and merely waiting for a geopolitical disaster or catastrophe so overwhelming that when the time arrives they can portray themselves as our saviors by carrying out this plan.

This is all part of the New World Order and globalization idea pushed by many of the rich elite and world leaders. It contends that larger, more cooperative governments under one financial unit will benefit us all. The fact is Americans have a great deal to lose if the dollar is dethroned and declines in value. Those who will be crucified are the middle-class Americans whose wealth is locked into or are holding long-term USD bonds thinking they are a safe investment.  To Americans, the fate of dollar-dominated assets and their value when the dust finally settles should be a huge concern but most Americans fail to grasp the implications.

The transition to a world currency would take a far greater toll on paper assets than tangible goods. While recognizing the flaws of the dollar and our current system I have come to believe the other fiat currencies such as the euro and yen hold even less merit. This includes cryptocurrencies such as bitcoin. Regardless, in the end, we should expect to be told and not given an option as to what is coming. If events unfold in the way those promoting a one-world currency hope, they will be able to portray cleaning up a financial mess as a blessing. The truth is, they will benefit greatly from putting a dagger in the heart of freedom. This is not written to frighten or as a prediction of doom but to dampen any illusions those at the top value those below them.

Footnote: Below are several links to previous articles related to topics mentioned in this post.