Destroying The Dollar Is Not The Solution To Trade Issues

The dollars recent tumble has moved far past where many of us predicted, of course, much of this has to do with President Trumps rather unorthodox take on "Making America Great Again."  While people can agree on a goal that does not mean their plan of how to accomplish it will take the same pathway. This was proven when none other than the U.S. Treasury Secretary Steven Mnuchin "broke with tradition" of supporting the U.S. currency on Wednesday when he told reporters at the World Economic Boondoggle in Davos that he endorsed the dollar’s decline as a benefit to the U.S. economy. "Obviously a weaker dollar is good for us as it relates to trade and opportunities,” Mnuchin said.

Mnuchin clarified the statement by saying "But again I think longer term the strength of the dollar is a reflection of the strength of the U.S. economy and the fact that it is and will continue to be the primary currency in terms of the reserve currency." Mnuchin shocked Davos participants because while it echoed Trump's own doubts about the desire for a strong currency, the Treasury Secretary's "mini QE" came as U.S. officials confront the global elite with their "America First" agenda, Mnuchin continued this line on Thursday in a panel appearance at Davos, where he mostly repeated his previous comment, stating that "a weaker dollar is good for us as it relates to trade and opportunities," and in terms of trade imbalances.

While it is still unclear if this has become the new U.S. policy Mnuchin's comments crashed the sagging dollar bringing it to a new three year low. This made many of us suspicious as to whether this government filled with Wall Street insiders made a fortune by being tipped off in advance about his intentions to trash the dollar. It also is another signal that not only is the Trump administration militarily aggressive but also willing to engage in heating up the currency wars. This comes after several years where behind the curtain central bankers seemed busy manipulating currencies to trade in a narrow range that would create stability and not rock the boat. Over the years countries have become very adept at coordinating policy and using currency swaps. It appears this has even extended to include investing in stocks. 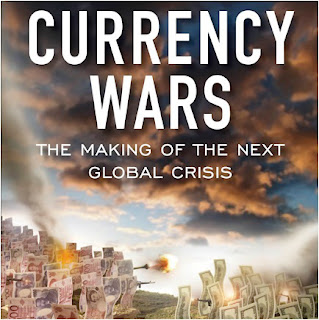 We cannot, of course, underestimate the important role currency valuations play in the global economy. When the dollar began to soar back in late 2014 the fear index began to rise and concerns were heard about the stress it was causing in countries that owed a great deal of debt that would have to be paid back in dollars rather than their own currency. Considering just how destabilizing currency swings can be it is easy to see how a strong dollar could obliterate the global economy and the emergence of bitcoin and cryptocurrencies have become a new wild card to the landscape. IMF Managing Director, Christine Lagarde, noted the dollar is a "floating currency" where value is determined by markets and geared by the fundamentals of U.S. policy is determined by the market. Lagarde suggested that Mnuchin should explain his comments which appeared to back a weak dollar, adding that U.S. tax cuts will probably cause the world’s reserve currency to rally.

The bottom-line is currencies are being promoted to play a bigger role in the trade wars and this is dangerous. Currencies should be viewed as an economic tool and using them as a toy or a weapon raises the risk of an economic misstep that will bring down a global economy dependent upon stable relationships between its various parts. Derivatives and the carry trade are often highly leveraged and can implode if stressed too much, in such a case the contagion can rapidly spread causing massive defaults. Fighting a trade war with currency as a weapon can bring about some rather self-defeating results and is akin to "Cutting off the nose to spite the face" is an expression used to describe a needlessly self-destructive over-reaction to a problem. This is a warning against the stupidity of pursuing revenge in a way that damages America and its wealth more than the object of our anger.


Footnote; Below is an article delves into the complex world of currencies and how the failure of any of the world's four major reserve currencies will destroy the myth that major currencies are immune to the same fate that has haunted so many currencies throughout history. It also reinforces how we must not underestimate the advantage the dollar has as the world's reserve currency or the size of debt floating across the globe comprised in dollar-based agreements.
http://Currencies Are Trading In A False Paradigm.html