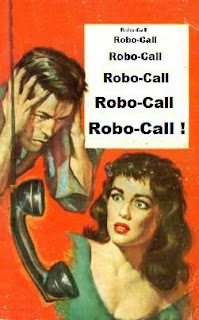 Recent legislation to halt unwanted robocalls may be the best thing to come out of Washington in over a decade. This is providing it proves effective in stopping or at least substantially reducing those annoying calls that cause our phones to ring several times a week. The House of Representatives approved the Telephone Robocall Abuse Criminal Enforcement and Deterrence Act, or the TRACED Act, earlier this month. Now with the Senate voting unanimously to pass it, the bill is on its way to President Donald Trump's desk for a signature.

The TRACED Act (Telephone Robocall Abuse Criminal Enforcement and Deterrence Act)was sponsored by Senators John Thune (R-SD), Ed Markey (D-MA), and Roger Wicker (R-MS). Its purpose is to combat robocalls with stronger deterrents. As the volume of illegal calls has increased, so has the attention of regulators. They are especially concerned about calls from scammers who target vulnerable people, such as the elderly, to steal their personal information.

In a piece titled; "Nobody Wants Your Robocall, Louie! - Stop Calling Me!" published in the middle of 2017 I bashed Washington for not taking action to end the robocall assault on the American people. Like many people, after being constantly bothered by nuisance calls and machine-generated messages I was past angry. Even a lying politician would have difficulty presenting an argument giving any merit to allowing people's lives to be disrupted by such calls. Adding injury to insult is the fact is that we are paying for this intrusion into our lives every time we pay our phone bill.

This legislation placing as much $10,000 per call.fine upon those behind what are obviously unwanted robocalls will reduce the incentive for companies to widely cast upon society their self-serving agenda. Before I declare this a significant win for consumers I want to see whether the Federal Communications Commission will or can actually enforce this law and get the job done.

The TRACED Act requires phone companies to block robocalls at no charge to customers. They must also adopt call authentication technologies so carriers can verify that incoming calls are legitimate before they reach consumers’ phones. This builds on preventative measures taken by the FCC under Chairman Ajit Pai, who recently announced that the commission would move to criminalize international robocalls and spam texts.

You would think that even a few high profile convictions would reduce the number of unwanted calls generated by machines. These calls are designed not to inform but to benefit a few at the expense of the many. Like many Americans, I have found that even being registered on the "no-call list" has proven ineffective in halting this intrusion into my life. I sill continue to get annoying recordings from Heather, Sara, or Rachael claiming she represents a credit card service center or inquiring about my student loan that doesn't exist.

After spending hundreds of billions of dollar on agencies such as the NSA it is difficult to think America does not have in place the expertise and apparatus to track down and identify the perpetrators of these calls.  Considering Washington is filled with elected officials that do little but annoy, debate, pander, and suck the blood out of us, trying to stop these calls is the least they can do. We should remember that both politicians and those who support them have used robocalls as a way to get their message to a public who they see as only a phone call away. Here, I'm referring to the calls during elections that sport political campaign messages.

I find little comfort in knowing I'm not the only person suffering this barrage of unwanted calls. On average, about 167 million robocalls per day were made from January to November of this year, according to the YouMail Robocall Index. That totals more than 50 billion robocalls. Sen. John Thune (R-S.D.) said, “This bill represents a unique legislative effort that is not only bipartisan at its core, but it’s nearly unanimously supported in Congress.” Please forgive me if I remain dubious of whether anything will change. I will consider this legislation successful only after the calls have stopped. My question is why in the hell did it take so long to write such legislation and get it passed?
Posted by Bruce Wilds at 5:57 AM