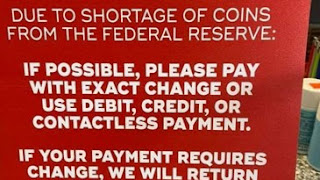 A shortage of coins is appearing across America due to the covid‐19 pandemic significantly disrupting the supply chain and normal circulation patterns for U.S. coins. The U.S. Mint halted production due to covid-19 which has caused Fed Chair Powell to admit to lawmakers the Fed will be rationing coins until the problem is resolved. Powell said; "What's happened is that with the partial closure of the economy, the flow of coins through the economy ... it's kind of stopped." He went on to say the shortage which is expected to be temporary is due to the business closures that prevented people from spending their coins, as well as a lack of places that are open where people can trade coins for paper bills.

We can only hope that this will cause more people to question the usefulness of the penny which is a blemish on the face of America. It is costly to produce, no friend to the environment and it wastes America’s resources while sapping our productivity. It cost our country billions of dollars, year after year. According to the “citizens to retire the penny” it cost the Country one hundred million dollars a year to produce the penny, and more than $15 billion dollars annually is wasted just in handling it. Coins are designed by the government to be a simple and efficient medium for the exchange of goods and services. For many years there have been discussions about discontinuing the penny which has become obsolete because of its minuscule purchasing value. The penny is a perfect example of our government's inefficiency and waste, and the cost is a burden carried by business. If an employee is paid $12.00 an hour they receive twenty cents per minute. Businesses simply cannot afford to pay an employee to handle and count pennies, the cost of the labor exceeds their value.

In March of 2012 Canada made the decision to do away with its puny penny coin, loved by some but an annoyance to many, it was withdrawn from circulation because it costs too much to make and had become a pecuniary pest. Ottawa said the penny retained only one-twentieth of its original purchasing power. Because it costs 1.6 cents to produce each one-cent coin stamped out, discontinuing the penny was expected to save around $11 million a year.

"It was just one of those no-brainer slam dunks. It's a place where we can save money," said legislator Pat Martin, who has long campaigned for the penny to be abolished. In the middle of 2014 the Toronto Sun reported that since circulation of the penny was discontinued on Feb. 4, 2013, more than four billion of the copper coins had been recovered, equivalent to a face value of approximately $40 million. The Royal Canadian Mint at the time estimated that approximately 6 billion pennies were in circulation when production of the coin ceased in 2012. I suspect the number has dropped substantially since then and its use has become non-existent. Once the distribution of the coin ceased vendors were no longer expected to return pennies as change for cash purchases and were encouraged to round purchases to the nearest five cents.

As for the issue of the American penny, simply put, the American penny doesn't make sense! Let it be decreed that the penny when weighed and measured is found lacking. Other nations have either ceased to produce or have removed low denomination coins the list includes Australia, Brazil, Finland, Israel, the Netherlands, New Zealand, Norway, Sweden, Switzerland, Britain, and as stated above Canada. By the time it was discontinued many Canadians considered the penny more of a nuisance than a useful coin. They often stored them in jars, threw them away in water fountains, or refuse them as change. Financial institutions faced increasing costs for handling, storing, and transporting pennies, and over time the penny had become a burden to the economy.

To many people the penny is simply a horrible little thing with no redeeming value that destroys vacuum cleaners when they accidentally suck one up.  Still, we find that not only does the government continue making the penny but over the years it has even made new versions of the penny. Voters need to remind Washington that it is not the job of the well-paid employees of the treasury to create collectibles or to pander to small segments of the population by designing coins commemorating or recognizing minor events.

The debate against continuing the penny is overwhelming, anyone still supporting it most likely has not given the subject much thought or is simply resistant to change, “the penny doesn't make sense".  From an environmental standpoint, the penny is also a disaster when you consider all the energy used to make, transport, and distribute this useless coin. Currently, it costs the U.S. Mint 1.66 cents to make each one-cent coin, meaning that taxpayers are losing 0.66 of a cent for each one of the 9.1 billion pennies the Mint produces each year. That is a loss of $60,181,440 to produce pennies in 2016. The U.S. Mint makes an average of  21 million pennies per day which adds up to around nine billion pennies annually. If we just get rid of the penny, the U.S. Mint would cut its work in half. This figure does not include the time, fuel, expense, and hassle of carting all of those pennies around to the banks, merchants, etc.

If we stop making pennies we would also save all this cost associated with it. Remember the penny coin, has almost no purchasing power today and the cost of making the pennies is higher than face value. The melt value of pennies ranges from more than two cents for the pre-1982 copper pennies, to nearly a full cent for the zinc pennies. Logically, sooner or later the penny is destined to the dustbin of history. Ditching the penny would cost literally nothing and with a flourish of the executive pen create huge annual savings for business but such a move remains fiercely opposed by metal alloy industries and Coinstar, which makes millions each year by helping people get rid of their unwanted change.

According to the folks at RetireThePenny.org, the average American wastes 2.4 hours a year handling pennies or waiting for people who handle them. This statistic is the result of compiling several penny-handling related events. These events include the ubiquitous 30 second period we sometimes spend waiting for someone who has to dig through their pockets or purse to find that last cent so they can pay for something with exact change. They probably do this, so they don't get stuck with any more pennies. Still, we should not expect the government to take action anytime soon in our country so focused on pandering to those who fear change. It seems we may need some kind of push to bring about the penny’s final demise, because if we wait for those in charge of such things to do the logical thing we may be waiting until the end of time. Small things matter, if our politicians can’t get this right how can they ever deal with the more important issues facing our nation?


Footnote; Please feel free to reprint this article and share it with friends or the White House, thanks.
Posted by Bruce Wilds at 5:52 AM