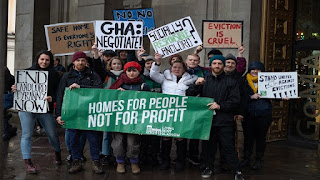 The Federal CARES ACT passed in March protects renters living in properties with government-backed mortgages from eviction until July 25. While the intent of lawmakers might be to protect what they consider the most vulnerable in our society this sends a grave signal to landlords. Halting evictions cuts away at the very fabric of contracts to lease property and undermines the rights of owners. Ironically in the end this will most likely put more pressure on low-income tenants and result in higher rents.

In the same way, rent controls have proven detrimental to controlling housing markets governments efforts to protect renters from eviction may result in unintended consequences. What seems by many a noble pursuit will cause many landlords to exit the business or take rental units offline. The government's action of halting evictions could be seen as an extension of current policies that sidestep dealing with the problem that society is creating a growing number of irresponsible tenants. The ugly fact is that government housing cherry-picks the best of the low-income renters providing them with very low rents and nice apartments. The rest they dump on the private sector.

Now that the eviction moratorium has expired, the covid pandemic predicts a wave of evictions is about to take place. The Urban Institute estimates the with the expiration of the eviction moratorium more than 12.3 million or 28 percent of America's 43.8 million renters are at risk of losing their homes. Landlords that have had enough have begun an unsavory part of their job filing eviction paperwork for tenants who haven't paid rent for 30 days or in many cases, months. This, of course, comes just as some 25 million Americans are about to lose the generous weekly $600 federal unemployment checks.

Unfortunately, the clowns in Washington are busy playing politics with this. In remarks outside of the White House on Wednesday, Trump and Treasury Secretary Mnuchin acknowledged that while the administration and Democrats remain far apart on any kind of deal. This resulted in them pushing for the extensions of both programs. Trump emphasized that halting evictions and keeping people in their homes has become a priority. A big part of the problem is that letting people remain in the property without paying rent does not stop the bills a landlord must pay from coming due. This rapidly makes being a landlord a money-losing proposition.
This all adds to the feeling everything is a bit off. It seems reality is starting to hit home as soaring rental costs collide with the fact overall disposable incomes have rapidly eroded for the middle class. The main driver of soaring rents seem to be following new building costs, in particular, land, material, and hard costs mostly driven by labor make it harder to build new buildings at a reasonable cost. This has resulted in some investors moving away from new construction and into remodeling older units which also raises the rents on current tenants ever higher.

Ultimately higher costs for taxes, local fees, utilities, insurance, maintenance cost, general labor, and just about everything will be passed on to the renter. While the market has responded to rental housing needs for higher-income households, there are alarming trends that suggest a growing inability or desire to supply housing that is affordable for middle- and working-class renters this becomes very noticeable when we look at the population with very low incomes. Developers have displayed little interest in, or they simply can't afford to add anything but luxury units.

There's a huge unhealthy disparity in high-end rents versus low-end rents across the country and with building cost being similar between constructing high-end versus low-income units why would anyone want to deal with the low end of the market and all the trash that comes with it when you consider that;
The government holds huge responsibility for a rising share of our housing problems in low-income situations because its policies ignore the reality many tenants are simply irresponsible. The main reasons for most evictions center around people not following the rules, damaging an apartment, or not paying their rent. By making anyone with an eviction on their record "ineligible" for most housing programs the government shrewdly and cleverly has sidestepped having to deal with these people. Even with close to half (47%) of all renter households (21 million) pay more than 30 percent of their income for housing, including 11 million households paying more than 50 percent of their income for housing, it is not enough when we are talking about "low incomes" and the amount of damage and grief they dump upon their landlords.

The unintended consequences of government policy which sidesteps responsibility for America's dysfunctional poor over time have added a great deal to our housing woes by driving up the cost of renting for everyone else. Many people do not realize that over the years government in many areas of the country have put massive disincentives in place for those interested in renting housing. Those include competing with them on many levels. Private landlords are forced to pay taxes that go to subsidize government-backed competitors that reject the least desirable tenants then ask the private sector to provide them with shelter. This allows government-backed projects to provide a better product at a lower price which often results in such projects being poorly run.

By bending over backward in an attempt to "protect the consumer" the government and courts are creating an army of irresponsible people who go through life exploiting "the system." We have even have gone to where tax money is being used to pay the legal fees of tenants wanting to fight the very landlords they have wronged. The government has even made it much harder to check the credit of someone wanting to rent claiming it is to protect the potential tenant's privacy. This ignores the fact those renting an expensive piece of property are putting themselves at great financial risk.
Landlord claims are usually pursued and disputed in the small claims division of the court where getting an eviction or judgment against a bad tenant has become increasingly time-consuming and expensive. Adding to this ugly reality are limits that often allow only a fraction of a landlord's loss to be covered, these can be as low as $1,500. It is not difficult for unpaid rents and damages to greatly exceed this amount. It must be noted that getting a judgment in your favor does not mean it will ever be paid and that these people continue to move from place to place causing havoc wherever they go.

Stories that delve into what is happening in our communities are important, I consider them as "micro-economic" images of what is occurring in many places across America. A show on Netflix titled "Renters" looks into the misadventures of property managers and their troublesome renters in New Zealand. It reveals similar housing problems exist in many countries. My attitude may be skewed by living in one of if not the lowest rent areas in America. A ZeroHedge article stated that "attractive rents" are a relative term as the monthly dues for a tiny studio apartment in NYC will still run you $2,681, or $64.92 per sq. ft. we're pretty sure that implies the average studio is roughly 495 square feet...or about the size of the average living room in all those "fly-over states" that elitist New Yorkers love to look down upon. The fact is, rents in my area are often as little as $650 a month for a two-bedroom one-bath 950 sq. ft. apartment. This is far less for essentially the same product.


Footnote;  I may have understated how much regulations also add to higher rents. In some states, the government is even debating putting the burden and responsibility for keeping occupied units clean upon the landlord. Also, it is not possible to evict someone during the Christmas Holidays in my area for any reason, you can file but no action will be taken until after the holidays are over. One way to address or level the playing field would be to move away from public housing and give those needing housing aid "rent only vouchers" that could be used with any landlord rather than putting these people into a quasi-government ran project. More on the subject of evictions in the article below.
https://brucewilds.blogspot.com/2016/05/evictions-in-america-plight-of-poor.html
Posted by Bruce Wilds at 5:27 AM