Going into the holidays a slew of "feel-good ads" from Amazon now hitting the airways is intended to mask the miserable truth about this company. Amazon has many critics on both the political left and right. While praised and pushed forward by politicians such as former President Obama as a job creator it has drawn ire from progressive heavyweights like Bernie Sanders for how it treats its workers. Now that stores are closing all across America and jobs are being lost much of the myth of Amazon being a positive force has vanished. Also debatable is the claim Amazon is not harmful to the environment, not only does it's delivery system and cloud use a great deal of energy but it has been documented that a huge percentage of products sold online get returned and end up in landfills.

In early October an article published on Viable Opposition took a strong look at the findings of the national non-profit organization Public Citizen. It delved into how Amazon benefited from the COVID-19 pandemic by gouging customers on what it sold. The fact that more shutdowns now appear in our future as tests show increasing numbers of cases makes this extremely important. Amazon's pathetic effort to distance itself from its sins with a PR campaign does not erase them.

The key findings of the Citizen Prime Gouging report are

This took place at a time when many bricks and mortar stores throughout the United States had been ordered shuttered as a result of the pandemic. With stay-at-home orders issued by state-level governments, many American consumers turned to shopping online for goods they needed during the pandemic. Below are some examples of price gouging by third-party sellers on items that were considered necessities for consumers: 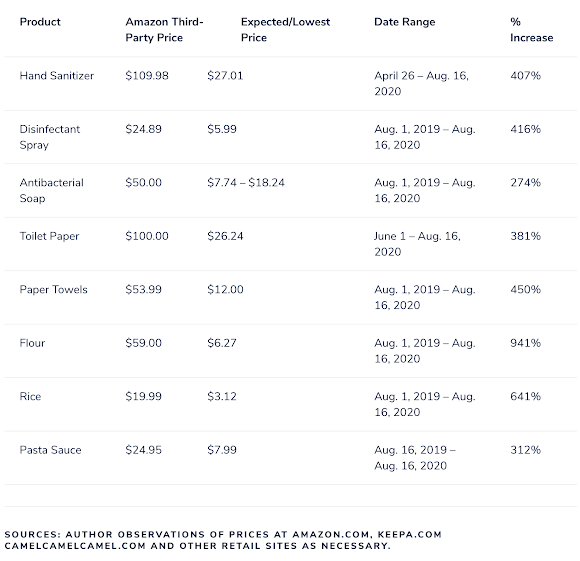 The chart below gives examples of price gouging on products sold directly by Amazon. Many of these items are considered to be essential components of PPE while other food products were in higher demand as households turned to home-cooked meals because they were ordered to shelter-in-place: 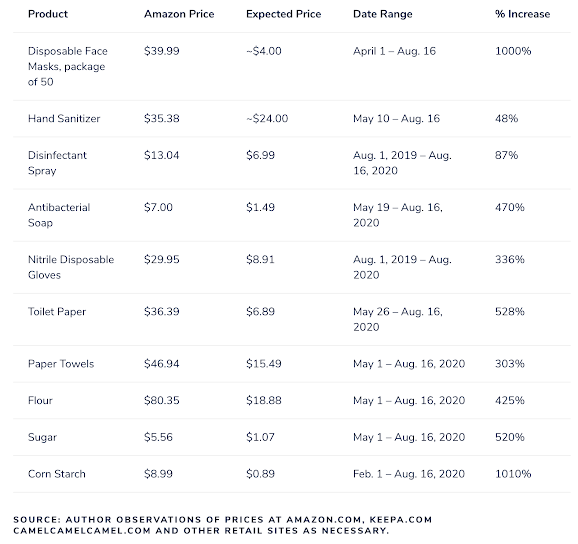 Of course, Amazon's response was to distance itself from price gouging in March 2020: 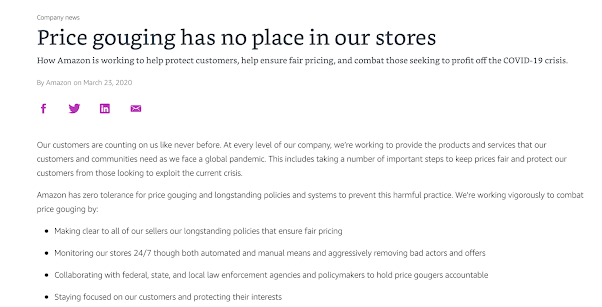 Longtime readers of AdvancingTime blog know this is not the first time Amazon abused its relationship with Americans while they were suffering. In an article titled, "Walmart Gave, Target Gave, Amazon Gouged!" in 2017, I detailed how Amazon.com increased prices on basic supplies ahead of Hurricane Irma’s landfall in Florida. At the time, Kate Taylor of Business Insider reported that customers took to Twitter to share screenshots of water from various brands — for example, Aquafina and Nestlé — priced roughly between $20 and $25 per case. Usually, the same cases of water sell for between $4 and $8, this means that the screenshots demonstrate Amazon was gouging customers for about 500 to 625 percent.

Amazon is a self-promoting hype machine that is far from transparent and while many politicians fall over themselves to be in its shadow it is not our friend. Because of its massive advertising budget and other ties to Amazon, we find the media often seems to be in bed with Amazon and continually portrays the company as both the flavor of the day and the future of commerce.  This means you seldom hear anything bad about the retail behemoth turning the articles put before us into nothing more than free advertising. These so-called "news articles" are often spun to place Amazon in the most flattering light. This explains why the issue of price gouging remains an under-reported story.
On a lighter note, or shall we say, in a rather strange reflection of how some people are reacting to technological changes, the term "technosexuals" has been coined. A new study commissioned by WeVibe, a sex toy company, found loneliness and anxiety during the virus-induced lockdowns has likely resulted in some people becoming sexually attracted to machinery, robots, and even smart-speakers. As bizarre as it might seem, WeVibe surveyed 1,000 men and discovered 14% of respondents confessed their Amazon smart-speaker sexually aroused them.

To these people, Amazon's smart-speaker, also known as "Alexa," has extended its role from just fulfilling questions about the daily weather or telling jokes but the Chinese-made device is fueling their sexual fantasies. Lucy Beresford, a U.K.-based psychologist, wrote in The Telegraph that the number of technosexuals is increasing and that society is sleepwalking into an epidemic due to loneliness and a growing fear of intimacy. All this has left me wondering if this is another part, or arrow, in Amazon's plan to shape the future and our opinions by extending its hold over individuals.

Due to its strong ties to America's government, Amazon has been allowed to create a persona or facade that far outshines reality. Amazon has adopted a full-on engulf and devour strategy to weasel its way into our lives. It is difficult to quantify all the damage Amazon has done to America as it has burrowed its way into the fabric of society. Amazon is the destroyer of the stores that provide valuable jobs and has exploited communities by continually telling consumers it is the answer to a "better America" while feeding at the government teat.

No federal price-gouging law exists in the United States but it is illegal in about 35 states. This means the free market is often considered the final arbitrator on pricing. Americans can shop online from any state which makes state laws against price gouging ineffective. This does not mean steps to prevent such actions by companies could not be put in place or that consumers cannot retaliate by taking their business elsewhere if they are aware they are being abused. Sadly, "feel-good ads" intended to create the illusion a company cares about its customers tend to massage away the truth.

This brings us to one last point. There is no denying that one person who has benefited from all the misery flowing from Covid-19 is Jeff Bezos. Thanks in large part to the significant increase in sales volumes and the price gouging noted above as a result of the government-imposed lockdowns Amazon has benefited greatly. According to Inequality.org, this has boosted the personal wealth of Jeff Bezos. It rose from $133 billion on March 18, 2020, to $206.4 billion on September 4, 2020, an increase of 55.2 percent. Maybe a hefty massive fine by the federal government over "price gouging" would take the snicker off his face.