CoVid-19 Not As Deadly As We Thought But Now What? 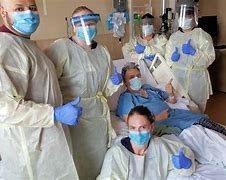 In some ways, much of the election became about the handling of Covid-19. One thing we have learned since this monster out of China has spread across the world is that Covid-19 is not nearly as deadly as we once thought. Because of how things were handled in China fear exploded. This resulted in many people getting the image of Covid-19 hitting on the level of the black plague. We were presented with the idea trucks might roll down our streets with loudspeakers blaring, "Bring out your Dead!".

On March first of this year, I published my fifth article on Covid-19. It seems I was early to the table claiming it had the potential to be a big deal. At the time some of those reading my articles criticized me for writing about a disease that didn't exist. Like many people, I never would have predicted much of what has unfolded since. Whether it is because Covid-19 has become so politicized or because those in the scientific and medical community simply cannot agree as to the answers, so far many questions about Covid-19 have not been fully addressed.

Back in March, I put forth the following questions stating," What we really need to know about the corona-virus is how it will affect us as individuals. At the time, the picture presented by governments was sketchy at best. Driven by agendas such as preventing panic and spinning the ramifications to lessen their toll on financial markets made what we were told unreliable. The big issue facing those interested at the time was what to expect and how to prepare. Below is a list of what I saw as the five most five crucial issues before us.


In the minds of the public several concerns and issues remain unresolved. Whether it is because Covid-19 has become so politicized or because those in the scientific and medical community simply cannot agree on the answers the fact is many of these questions have not been fully addressed. Today, with it clear Covid-19 is not the "get it you die" killer we thought, the questions above have been replaced with several others. Most of us are not panicked but slowly becoming resolved to the fact we are living in a world that will never be the same. Our lifestyles have undergone some rapid social adjustments as the concerns of being stalked by such a virus have unsettled in.

The public has good reason to be skeptical of what we are being told when the so-called experts can't agree on how long a person should be quarantined and continue changing how long the virus can live on different surfaces. In truth, we have no idea how far this virus has spread. Remember, not everyone that has been infected has been tested. Many countries have few health care facilities and still suffer from a shortage of test kits. While this virus is particularly dangerous because many carriers of the infection show no symptoms the big question is whether it merits such stringent measures as to locking down the movement of people in large areas to stop its spread.

Other issues revolve around when and how a vaccine will be received.  Most vaccines have very long study periods that most likely won’t be done before a vaccine is hastily rushed through development. This has led to growing questions and fear about whether it will be safe or how it effective it will be mean many Americans are not enthusiastically ready to be vaccinated. Talk about it being required or mandated does not sit well with a large part of the population. Of course, the bill for all of this will be massive and we the taxpayers will get stuck with all of it. All of this is truly an incoherent mess in which both social media and a bias media with an agenda have worked extremely hard to spin and politicize.

The mainstream narrative is that  Covid-19 remains a quite deadly and novel disease and there are no effective treatments. This means that society must do all it can to help the brave health authorities that care about saving lives including surrendering our liberties and shutting down the economy. with a second and possibly third wave ramping up across the U.S. and Europe and there’s nothing we can do to limit it except shut down businesses and halt the ability to travel and gather. Much of this narrative and hype is based on the idea every life is precious and equal. It discounts the fact quality of life matters. Keeping a ninety-five-year-old person with Covid-19 alive could be seen as not saving a life but merely extending it at great cost.

Some covid skeptics might go as far as to argue this has become just as much about money as health, and we are talking trillions of dollars. Slow-moving incompetent overpaid bureaucrats within governments with strong agendas generate and control both the data and the narrative. Whether the goal of a government is to limit panic, deflect criticism from its failings, or simply generate the impression they have control of the situation we pay the price. When we step back and look at what has so far occurred we find that perhaps locking down societies doesn’t do much to combat the disease while it does do a lot to ruin people’s lives and livelihoods?

The alternative narrative is very different. it is based on the idea that while covid-19 is a dangerous disease, it is not novel. Some people argue a combination of mostly OTC supplements could reasonably be expected to drop the severity of illness and the already low mortality rate by 90% or more. Common sense an assortment of very effective, inexpensive widely-available methods of preventatives exist that lessening its impact. Still, we are told health authorities have shown either zero interest in the results of such studies mainly conducted in poorer nations or they have actively run studies indicating these cheap, effective therapies could be dismissed.

It appears someone is bending the truth when we hear or are told that in Sweden, where virtually nobody outside hospital settings uses masks, the 7-days rolling deaths per capita has been lower than in the U.S. for months. It is also lower than in the U.K. which is in a mask-wielding and lockdown craze. Even Germany is said to have more people dying with Covid-19 than Sweden does. Infection rates and spread trends since the height of summer now are beginning to look similar if you’re a massively mask-wearing country or not. In many ways, the ramifications of the media, big tech, and Orwellian governments using this virus to increase their control over a docile populace is even more threatening than the pandemic itself.

Today, just like months ago the long and short-term economic consequences of Covid-19 remain uncertain. Certain sectors of the economy are destined to continue taking it squarely on the chin. Businesses involved in things where people gather or move about remains in peril. The disruption of production and deliveries will continue to have a massive effect on business. Many small businesses without the financial resources to absorb losses and weather this storm have already failed and as this rolls on jobs will be lost and inequality will grow. Expect companies to continue shortening and reducing the weakest links in their supply chains. It is impossible to deny these long-term consequences will stay with as the threat of Covid-20 and 21 linger in the shadows just out of sight.

This is the link to that March first article; https://brucewilds.blogspot.com/2020/03/coronavirus-five-things-we-need-to-know.html