Living With An Older Parent Suffering From Dementia

Living with an older parent suffering from dementia is no cakewalk. It also will make a person rapidly aware of the fact these people need constant supervision and attention. While this is off topic from the economic issues I usually write about it is important, Today, dealing with the declining health of a parent is happening to a lot of people just as they are looking forward to retirement. To be clear, dementia is not a specific disease but is rather a general term for the loss of cognitive functioning, thinking, remembering, and reasoning to such an extent that it interferes with a person's daily life and activities. In short, often a person with dementia will not know where they are or much of anything else. At other times they may seem rational and sound. 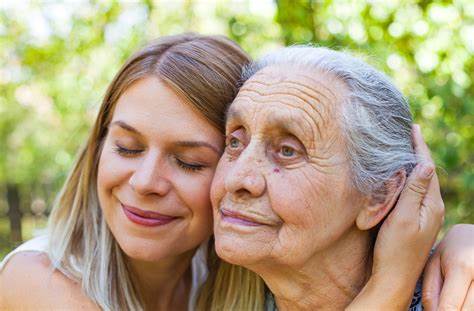 This doesn't mean all dementia suffers are always sad or completely out of it but it does mean they can come across as bat-shit crazy and appear delusional, mistaking those around them as being someone other than who they are. This can lead to them becoming agitated or even combative. Convincing someone suffering from dementia they are home at 2 AM when they think otherwise is no easy task.

When you add in the issue of fragility that comes from old age and how even a fall can be disastrous the problems are compounded. This means "child-proofing" your house and then doing it again. Everything becomes a potential danger point. Caring for a person with dementia or Alzheimer's disease is akin to full-time babysitting without the luxury of being able to put them in a crib where they are contained. A side bonus to all this is that you can expect to hear the same story time and time again when they slip into their "halfway out of it" grove.

Recently my ninety-three-year-old mother-in-law came to live with us and to say it has been challenging is an understatement. This happened after the man she married about ten years ago died. He had been taking care of her even though he was sick, this worked for them in that it seemed to give them both purpose. Near the end of his life, she had to have a so-called caregiver brought in at $26 an hour which is considered very reasonable for such care. What some people forget is that this is not for just during the day but 24/7.

If you are looking for someone to come into the home and watch over them, the math becomes very ugly very fast. An hourly rate comes to around $625 a day, $4,375 a week, or round it off at about $13,500 a month. Also, you still have all the other living expenses that most of us have such as food utilities, and more. Another huge concern is the quality of care, it is difficult to convince me that all the people sent to her home were hard-working compassionate souls that made her their top priority.

It is easy to envision them sitting on their asses playing games on their phone or pigging out on the food you have purchased. You must remember the agency hiring them takes a big chunk of that $26 fee and often hires people for as little as possible. Dementia suffers with multiple caregivers passing through their doors are open to all kinds of abuse. Just like the elderly placed in a home, it is not uncommon for their possessions to be pilfered through and valuables to come up missing.

In a nutshell, no easy answer exists as to how society can make a person whole again after they have lost such a huge part of themself. Sadly, this affliction is a growing problem in modern society and one of the reasons I feel people should have the right to request ending their life with dignity rather than moving forward mentally impaired. This is particularly a problem for those with no love ones or family, many of these people end up living on the street. In the future expect the issue of euthanasia to be discussed and argued in great depth.

Circling back to the focus of this article, anyone having a parent suffering from dementia brought into their home should expect their life to be totally disrupted and a massive loss of freedom. They will most likely find the huge majority of family members bailing out of taking any responsibility for the care of their parents.

Expect the excuses of I'm too busy or not trained for such care to role forth. (spill out of their mouth) Still, even more annoying is their pathetic suggestion they slide by for a short visit thinking it might be fun and as a bonus eliminate their guilt. Yes, coming by for a "party" and a good time may make you a hero and saint in your eyes but it is a bit like taking credit for doing nothing. They best pray that as they age they are not also afflicted by the same disease, after all, it does run in families.

Footnote; Following is the link to an article many people may disagree with. It appeared on AdvancingTime concerning the issue of euthanasia.   https://brucewilds.blogspot.com/2017/04/euthanasia-opens-path-to-dignified-death.html