Canada May Be On The Verge Of A Political Revolution

Canada like many other countries may be on the cusp of a political revolution. To the chagrin of the mainstream media in Canada, Pierre Poilievre has been elected the leader of Canada's Conservative opposition party. As a result of his win, attacks on Poilievre have dramatically increased. He has been declared as "dangerous" and even reckless. In short, Canadian media is busy painting him as a mini Donald Trump.

In what is seen as a move to appease many of his critics Prime Minister Justin Trudeau recently declared an end to Canada's vaccine mandate. This includes the policy of requiring travelers entering Canada to provide their vaccine passports and a slew of other restrictions and requirements. This took effect on September 30th and was considered partly in response to the growing threat of the populist sentiment popping up in Canada. Many Canadians had come to view Trudeau's vaccine dictate as overtly authoritarian, it reeked of government overreach and Gestapo-style tactics. 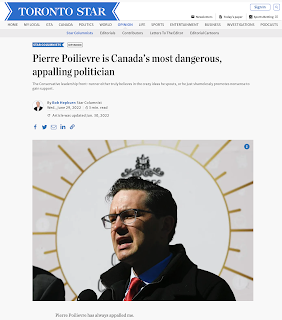 The Poilievre surge has resulted in Canada's mainstream media ramping up the fear factor by declaring Poilievre's recent win as dangerous. Some of the recent headlines, such as the one to the left put out by the Toronto Star, leave little question as to the color of paint they wish to use. The headline in the Tyee was also unkind, it read, "Pierre Poilievre Is a Symptom of the Conservative's Sickness"

The surge in Canada is occurring at the same time the populist movement is strengthening in several other countries. For instance, in Italy, Giorgia Meloni's right-wing bloc is celebrating a historic victory and its clear majority. Meloni's victory came despite European Commission chief Ursula von der Leyen threatening to bring the EU mechanism to bear against Italy if Italian voters placed Giorgia Meloni in power.

Even after the threat, the latest election in Italy resulted in a landslide win for the conservative coalition and Italy's first woman prime minister. Following her win, Georgia Meloni, gave a rousing victory speech that directly exposed the far-left invasion of western nations, globalism, and the poisonous collusion with woke corporations to silence dissent. Meloni called for a return to freedom, and the response from the media was to call her a “fascist.”

A two-minute video of a Meloni speech went viral as the votes in Italy were being counted. In it, the new Italian Prime Minister eloquently describes that Italians and human beings, in general, are not mere identity-less consumers and economic playthings of the ivory tower technocrat class. Apparently, her attitude resonated with voters that have simply had enough.

Meloni's win is just a small part of an ongoing trend. It should also be noted that in this year’s municipal elections in the Czech Republic the populist ANO party, led by former Prime Minister Andrej Babiš, came in first in eight of 13 regional capitals. Babiš, considered a close ally of Hungarian Prime Minister Viktor Orbán, narrowly lost the Czech national elections in 2021. These latest numbers indicate that his party is clawing back voters due to a souring economy and growing cost-of-living crisis.

Opinion polls, controlled by the mainstream media, often understate the strength of right-wing candidates. Another place where the same populist dynamic has flared up is Brazil. On Sunday, President Jair Bolsonaro's numbers far exceeded pollsters' consensus. Heading into the election a major poll pointed to former left-wing President Luiz Inacio Lula da Silva winning by a 14% margin. In the end, Lula only received 48.4% of the votes forcing the two men into a run-off election on Oct 30. At this point, it seems that momentum is on Bolsanaro's side.

While political leaders like Justin Trudeau and Joe Biden strut around on the media stage accusing ideological opponents of being "enemies of democracy and dangerous," their mostly conservative rivals talk about restoring power to the people. What could be more democratic than that? We can only hope enough of those people that feel their country is headed down the wrong path wake up and question what they are being told.

The one thing Poilievre, Meloni, and most of the politicians spouting populist or conservative messages have in common is that they are hated and branded as dangerous by the mainstream media. It could be argued that much of this is rooted in the fact these politicians denounce all notions the globalist elites should be allowed to expand their power and rule. In short, they are willing to swim against the tide.