Most Americans have no idea about just how explosive the Ukraine war has become. Unlike the prior conflicts in the Middle East, this has the potential to rapidly expand into World War III. Still, a group of warmongers in Washington seems hellbent on pursuing the destruction of Russia no matter what the cost or risk. Sadly, the mainstream media continues to crank out the narrative that America should continue to support what has essentially become a proxy war.

The Nord Stream gas pipelines that were meant to deliver gas to Europe were severally damaged overnight on Monday and it appears it was intentional. Since then, other leaks are being reported. A video of President Joe Biden on February 7, saying that he would "end" the Nord Stream 2 gas pipeline quickly resurfaced after the attack on Nord Stream 1 and 2. At the time, a journalist asked Biden how he could do that since Germany was in control of the project,  and the president replied: "I promise you: We will be able to do it."

The type of officials familiar with such things have not been shy in calling this a deliberate act of sabotage. Considering the thickness of the pipe that is the only explanation for the leaks. This event weakens Germany and Europe at the same time it straightens America's sales of natural gas to the region. The damage or demise of this gas delivery system will most likely guarantee a long cold winter of suffering for many Europeans. This coupled with the economic trauma of higher energy prices adds to the woes of a falling euro. 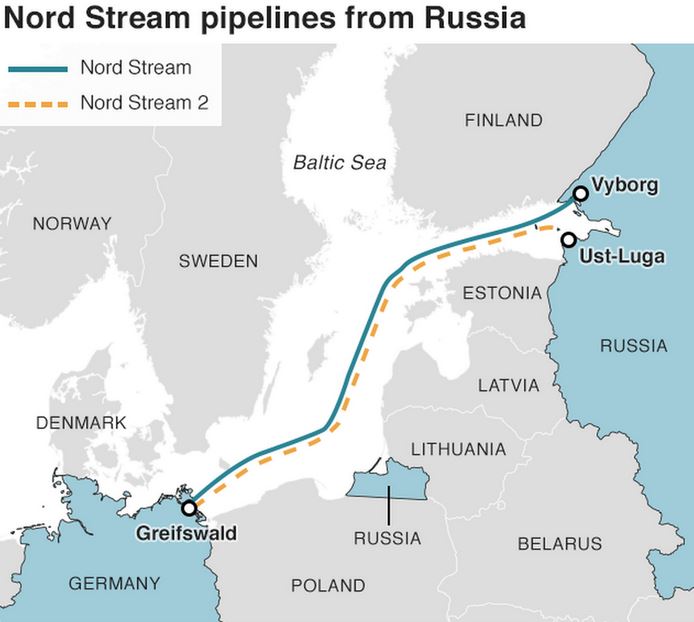 The Nord Stream 2 project represents a major investment. A great deal of energy was used to make and lay the pipe. The 1,234-kilometre-long (767 mi) 48-inch diameter natural gas pipeline from Russia to Germany runs on the bottom of the Baltic Sea and was financed by Gazprom and several European energy companies. It required around 200,000 coated steel pipes with a concrete coating. Each measured 12 meters long and weighed around 24 tonnes.

It should be noted that this incident took place the day after thousands of German protesters took to the streets and demanded the opening of the Nord Stream 2 pipeline. Never turned on but filled with natural gas there is absolutely no reason for Russia to destroy the delivery system it paid to construct. It could be argued that as long as it was not being used, there was no reason for anyone to destroy it.

The environmental damage this attack caused is a slap in the face of all those concerned about global warming. The destruction of these pipelines that would efficiently move this rather clean energy source to where it is desperately needed underscores the hypocrisy of people like Biden and his administration that carry on about global warming. We can only imagine how much natural gas was lost when the pipeline was destroyed. The massive disconnect between the policies of these so-called environmentally concerned individuals and doing what is best for creating a sustainable world boggles the mind.