The face of America is growing less friendly, years ago Dale Carnegie wrote a book titled; How to Win Friends and Influence People. It was first published in 1936 and it became a massive bestseller. Carnegie was an early proponent of what is now called responsibility assumption, one of the core ideas in his books is that it is possible to change other people's behavior by changing one's reaction to them.

If Carnegie was alive today he would most likely be shocked at how many people approach others with a scowl and distrust. This feeling, or reality, has spread across the globe making the world a Hindenburg In Search of a spark. Time may prove that we as a society have become far too complacent to the rising threats growing up around us.

For a majority of people, thoughts of what the future holds are bracketed by a general feeling it will be more of the same. This means not necessarily better but certainly not much much worse. The opinions and assumptions people form are heavily swayed by mainstream media and big tech's hold over how we get information.

This information is often shaped to distract rather than inform. The stuff and fluff presented as news by mainstream media generally omit many of the important events occurring across the world. In short, most people never hear about the protests, killings, and governments failing to protect the rights of their people. Most people never hear the things the media intentionally excludes from its coverage. Overall we, as a society, are poorly informed.

The future is uncertain, however, the following list below contains the 10 largest and most explosive issues before us. With this in mind, protecting your savings and capital should be job one. Some of us have been predicting a storm is coming, and it now appears it has arrived.

How will things in China play out? - will Xi survive - cities are locked down - people are protesting - and more. China with its "ghost cities" is not the well-oiled machine many people think it to be.

If China moves on Taiwan how will that be resolved? Most likely, not well, it is difficult to see anything good flowing from such a confrontation.

Will the European Union and the euro survive? Putin is going tit for tat and holds the cards when it comes to energy. America's Military Industrial Complex has never found a war it did not like, there is big money to be made blowing things up. With Biden enthusiastically sending American dollars and weapons to Ukraine, we have the potential to light up Europe and the world with a nuclear glow.

Energy Conundrum, across the world energy has become a big deal. Because the world is convinced mankind is causing the climate to change and soon we will be up to our ankles from rising tides and unable to grow food because plants will bake in the fields. This means we should turn off the lights, live in the dark, and eat bugs.

EV Stupidity, with the energy crisis in mind the answer is to use more electricity to power cars rather than design a world where we drive less or use more efficient vehicles.

Is Globalization Dead? We can only hope. When you join mega-global corporations and big dumb governments together and throw in massive social unrest, what could go wrong?

Fiat Currencies, the financial sector, and contagion - Ha, no fraud going on there, no deck of cards ready to fall, I assure you everything is built on a foundation of stone.

Inflation, deflation, or stagflation, stability is gone. What does this mean for us as we plan ahead? It means most of us are screwed.

Growing inequality! This is our only real success. We have proven we can grow inequality and make Jeff Bezos rich. By buying things online and putting the local stores where our neighbors work out of business we can make ourselves poorer. As a bonus Amazon will deliver products to our door pronto so we can return them the next day. This way they can be sent unused to a landfill and factories will have to make more.

Artificial intelligence and "robotish" things. "At least we are being looked after." or should I say spied on. What we should be afraid of is when robots start building and repairing robots then we will merely be a bothersome infestation. That is the day the slaughter bots will be released.

Well, that seems to be enough. If you want to bring up another major issue let me know in the comment section. For fun and giggles, Take a look at the great chart that recently appeared on Wolfstreet.com. 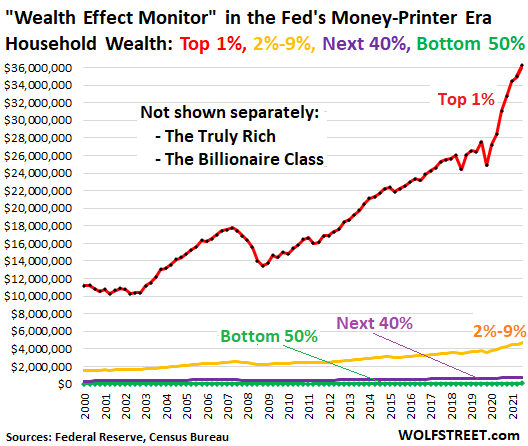 This chart, which is one of the best I have ever seen concerning the "wealth effect." should be enough to convince even the harshest skeptic that there is something very wrong going on. The 10 explosive issues above should exceed the need most people have for doom porn. The answer to all these woes that some people have come up with is that women need to have more babies. This is based on the idea we will need more workers. Such a tactic is a little like pouring gasoline on the fire to put it out. The argument could be made that if we stopped destroying all we touch, we would need far fewer workers. Oh, and by the way, have a marvelous day.